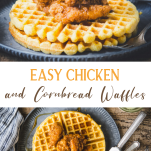 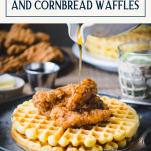 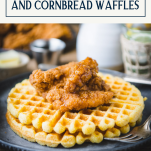 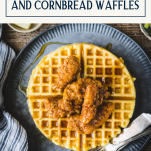 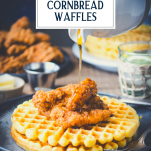 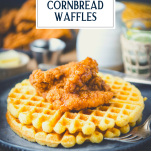 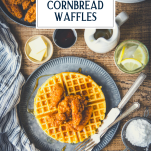 This quick and easy chicken and waffles recipe includes crispy chicken tenders, hearty cornbread waffles, and a drizzle of maple syrup, honey, or powdered sugar. The combination is sweet, savory, and perfect for breakfast, brunch, lunch, or dinner! Serve the classic Southern dish with fresh fruit, a simple green salad, bacon-wrapped asparagus, or hash brown potatoes for a delicious and satisfying meal at any time of day.

Chicken and waffles is a classic Southern dish that combines the best of breakfast (waffles), with the best of lunch and dinner (fried chicken)! You'll often find this meal on the brunch menu at diners and restaurants throughout the Southeastern United States; however, we think it's especially tasty when served as a weeknight dinner.

While it might sound like an odd mix at first, one bite is all it takes to understand the appeal of this Soul food favorite. You get the savory, salty, crispy fried chicken alongside hearty, slightly sweet, fluffy cornbread waffles, for the ideal union of flavors and textures. No matter the time of day, this meal is always well received!

While some folks claim that "chicken and waffles" originated at the Wells Supper Club in Harlem, New York in the 1930s, different versions of this dish date back to the founding of our country many centuries before. Some historians argue that the combination was originally created by the Pennsylvania Dutch back in the 1600s, while others believe that it began in the South with enslaved Africans mixing rice flour batter and cooking it to create golden-edged waffles, dabbing on spoonfuls of blackberry preserves (a la iconic Southern chef and author Edna Lewis), and frying chicken on the side.

Soul food scholar and author Adrian Miller explains that chicken and waffles smothered in gravy was a standard Sunday supper for German settlers during the 19th century. By the early 1800s, a "Virginia Breakfast" featuring a combination of fried or baked meats with any sort of hot quick bread, was the gold standard of plantation hospitality.

Regardless of its origin, one thing is certain: chicken and waffles has been a beloved meal and an important part of the food culture in my home state of Virginia, the South, and the larger United States since before our country was founded. The combo is delicious, affordable, and should become a part of your regular meal routine, too!

This chicken and waffles recipe is particularly easy, since it takes advantage of frozen chicken strips for a quick meal that's on the table in about 30 minutes! Sure, you can make it entirely from scratch with homemade chicken fingers in a skillet, or crispy buttermilk fried chicken in a Dutch oven -- but that's certainly not necessary. And if you're really in a rush? Frozen waffles will work, too! Take the idea and make it as simple (or as complicated) as your schedule allows.

This is a quick overview of the simple ingredients that you'll need for our favorite chicken and waffles recipe. As always, specific measurements and step-by-step cooking instructions are included in the printable recipe box at the bottom of the post.

How to Make Buttermilk at Home

You need the acidic buttermilk to activate the baking powder in these cornbread waffles. While real, whole buttermilk yields the best flavor and texture, you can also make your own buttermilk at home to use in this recipe. To do so, pour either 1 ½ tablespoons of freshly squeezed lemon juice or 1 ½ tablespoons of white vinegar into a large measuring cup. Add enough milk to equal 1 ½ cups of liquid. Give it a stir, let it sit for about 5 minutes, and then use it in the recipe as directed.

How to Make Chicken and Waffles

This easy chicken and waffles recipe comes together from start to finish in about 30 minutes, thanks to help from a tasty shortcut!

What to Serve with Chicken and Waffles

Serve the chicken and waffles with toppings like maple syrup, honey, hot sauce, a dash of paprika or cayenne pepper, butter, honey butter, jam, apple butter, or a dusting of powdered sugar. The easy recipe pairs well with a wide variety of sides, too -- from brunch favorites like candied bacon or sausage gravy, to dinnertime fare like collards or salad. Here are some ideas to get you started:

Leftover chicken strips will keep in an airtight container in the fridge for 3-4 days. Allow the leftover waffles to cool completely, then wrap tightly and store in the refrigerator for up to 1 week, or in the freezer for up to 3 months.

Reheat the chicken tenders in a 350°F oven until heated through and crisp again, about 10-15 minutes, flipping halfway through. Reheat the waffles directly from the freezer or fridge in a toaster until hot and crisp.

Tips for the Best Chicken and Waffles Recipe 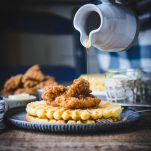