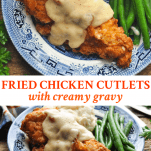 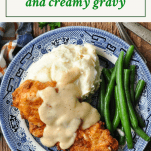 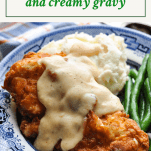 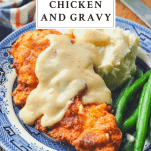 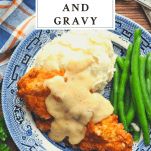 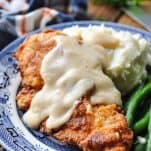 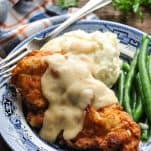 Who doesn't love fried chicken and gravy?! Of course, if gravy's not your thing (or your kids' thing), you can leave that off -- the crispy, golden-brown fried chicken cutlets are still delicious on their own.

Chicken cutlets are really just thin pieces of boneless chicken that have been cut from a thick breast or pounded flat. I typically purchase thinly-sliced chicken breasts or "chicken cutlets" at the grocery store to save some time on the prep work.

Chicken cutlets are ideal for pan-frying for a couple of reasons:

How to Fry Chicken Cutlets

These chicken cutlets are dipped in buttermilk and dredged in seasoned flour for a family-friendly, easy dinner that’s ready in about 30 minutes.

What does buttermilk do for fried chicken?

I always use buttermilk for my fried chicken because it adds flavor, it tenderizes the meat, and it keeps the chicken juicy.

Combine salt, pepper, thyme, garlic powder and paprika. Set aside ½ teaspoon of the seasoning mix to use in the gravy later, and add the rest to the flour for dredging.

Step 2: Dip in Buttermilk and Dredge in Flour

Place self-rising flour in a shallow bowl with the seasoning mix. In a separate bowl, whisk together the buttermilk and egg.

Dip each chicken cutlet in the buttermilk mixture first, then dredge in the seasoned flour. Place the breaded cutlets on a wire rack to rest for a few minutes while you heat the oil and preheat the oven to 200 degrees F.

Pour oil to a depth of about ½-inch in a Dutch oven or deep cast iron skillet. You'll likely need about 1-2 cups of oil to reach the appropriate depth, depending on the size of your skillet.

Heat the oil over medium heat until it reaches 350 degrees F. It can get as high as about 375 degrees F and as low as about 340 degrees F, but you want to try to keep it within that general range.

You don’t need a thermometer to fry the chicken. Instead, when the oil is hot (but not smoking), add a drop of water to the pan — if it sizzles, the oil is hot enough for the chicken. You want to maintain a fairly steady temperature as the chicken cooks, so don’t overcrowd the pan with too many pieces at once (which will bring down the temperature). If the oil is really flying and it seems to be too hot, you can turn down the heat slightly.

How Long to Fry Chicken Cutlets

Working in batches, fry the chicken cutlets in the hot oil until they're golden brown and crispy -- about 3-4 minutes per side. Drain on paper towels and season with additional salt and pepper while they're still warm.

How to Keep Chicken Cutlets Warm

Once the cooked chicken drains on paper towels, transfer it to a wire rack on top of a baking sheet. Place the baking sheet in a 200 degree F oven to keep it warm while you continue frying the remaining batches and prepare the gravy. Do not cover the chicken or tent with foil -- that will make it soggy.

Step 4: How to Make Gravy from Chicken Stock and Flour

Just before serving, whisk together the creamy gravy in a separate skillet.

Whisk together oil and flour, then gradually pour in the chicken stock and milk. Add the reserved seasoning and cook, whisking constantly, until the gravy thickens.

Season with salt and pepper, then spoon the warm gravy over the fried chicken.

What to Serve with Easy Fried Chicken Cutlets

Chicken, mashed potatoes and gravy is a classic combination! Here are a few other simple sides to serve with chicken cutlets:

Fried chicken is best when it is fresh and crispy. Leftovers will keep in the fridge for 2 to 3 days; however, the breading will not be as crispy when reheated.

You can freeze the fried chicken cutlets for up to 3 months. You do not need to defrost them before reheating.

How to Reheat Fried Chicken Cutlets 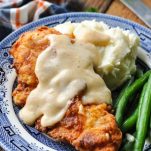