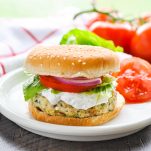 These light and healthy burgers are bursting with fresh Mediterranean flavor!

Good morning, and happy Sunday! It was a good week around here — full of hot days, new books, new burgers, and delicious summer treats. All of the highlights from the past few days, along with our easy dinners, are included in today’s roundup of Our Week in Meals!

I was still at my parents’ house on Sunday morning, so I started the day with banana bread and cream cheese, along with Greek yogurt, honey and fresh fruit (those Nelson County peaches are perfection)!

After breakfast, Dad and I took the dog for a walk while it was still nice and cool. We were spoiled with some beautiful June weather for a few days!

We left Nelson County to head back home to Madison shortly before lunch. Since everyone was hungry as we were driving through Charlottesville, we made a quick stop for a picnic at Qdoba — Pulled Pork Bowl with black beans, corn salsa, pico de gallo, guacamole and tortilla strips.

For dinner that night, Keith smoked ribs and pork chops from our first Butcher Box (a Father’s Day gift).

On the side, I prepared a Southern Peach Salad with Green Goddess Dressing,

as well as a loaf of 3-Ingredient Beer Bread (the bread literally takes about 5 minutes to stir together!).

I also finished another book that evening! While Mom was in the hospital, I basically stopped reading for a few weeks — I just couldn’t focus on anything. Now that she’s on the mend, I’m back at it!

Sarah’s Key was a quick read that kept me turning the pages. My friend Gloria recommended it when she realized that I like historical fiction, and this did not disappoint!

The story begins in Paris in July of 1942, when Sarah, a ten year-old girl, is brutally arrested with her family by the French police in the Vel’ d’Hiv’ roundup. Sarah locks her younger brother in a cupboard in the family’s apartment, thinking that she will be back within a few hours.

Throughout the novel, we jump forward to Paris in May of 2002. On Vel’ d’Hiv’s 60th anniversary, journalist Julia Jarmond is asked to write an article about this black day in France’s past. Through her contemporary investigation, she stumbles onto a trail of long-hidden family secrets that connect her to Sarah. Julia finds herself compelled to retrace the girl’s ordeal, from that terrible term in the Vel d’Hiv’, to the camps, and beyond. As she probes into Sarah’s past, she begins to question her own place in France, and to reevaluate her marriage and her life.

I really enjoyed the book, but I was ready to switch gears to something a little bit lighter emotionally for my next read…

Monday started with a cappuccino on the porch while the boys played Nerf guns in the front yard. Enjoying the cooler temps before the heat and humidity returned for the week!

I photographed a few recipes later that morning, and even managed to squeeze in a walk around our property with my friend Mollie.

After lunch, Casey and his friend Grant basically spent the entire afternoon outside in the 90-degree heat on the basketball court.????

Dinner that night was a Dump-and-Bake Chicken Tetrazzini (I just swapped out the turkey called for in that recipe and used chicken instead). On the side we had steamed green beans tossed with butter and seasoning.

After a short stroll up the road with the dog on Tuesday morning, I piled the kids in the car and we all went to the gym for my 8:15 a.m. yoga class.

Followed by treats at Dunkin’ before returning to Madison!

After lunch, the kids and I packed up the car so that we could make our way south to my parents’ house for the evening.

Our visit included an afternoon trip to the pool in their neighborhood,

and fried chicken and potato salad from Ashley’s Market for dinner, along with a Greek salad that I made at the house.

Plus a post-dinner hunt for golf balls in the stream!

Once the boys went to bed, we got out our dessert! I had a slice of Peach and Blueberry Galette (that my dad made the day before) with vanilla ice cream. Such a treat!

We spent Wednesday morning at my folks’ house, where the kids joined me for a couple of dog walks…

…and we finished a few art projects on the porch.

Mid-afternoon, we stopped at Dairy Queen for a cool snack as we were driving home through Charlottesville. The boys got S’mores Blizzards and were in absolute heaven. My order never changes — rainbow sprinkles forever!

My mom had a bunch of lump crab meat in her fridge, so I prepared a batch of crab cakes earlier in the day, left some for my parents to have for dinner, and brought the rest home with us.

This was a really tasty meal: fried crab cakes, coleslaw and baked potatoes.

Thursday was another hot and muggy 90+ degree day. Look at all of that hay ready to be baled!

The boys and I dropped Teddy off at the groomer’s, and then I dragged the whole crew with me to my haircut. Fortunately, I don’t got to a fancy salon (just a friend’s house). Bonus: my hairdresser has a beautiful view — and a trampoline for the kids to jump on outside!

Mollie came by to walk with me late morning, we had lunch at home, and then I took the boys to the bowling alley for the afternoon. This was a great (cool) alternative to hot and sweaty outdoor play!

Late afternoon walk with Nerf guns in the shady woods…

Our dinner that evening had an Asian theme: a 10-Minute Beef Teriyaki Skillet, which I served with jasmine rice, frozen (baked) egg rolls, and 10-Minute Sesame Roasted Broccoli. YUM!

Friday morning got off to a later start than I had initially planned. We were headed to Nelson County to see my folks for the day, but after a stop at the post office and a stop at the gas station, we were about 15 minutes from home when I went to pick up my travel mug, the lid fell off, and I spilled iced coffee all over my lap and the car.

I did a quick u-turn and returned home for my second shower and outfit change of the day!

Back on the road, we stopped at Critzer’s Family Farm to buy some fresh peaches and blackberries.

I’ve got big plans for my favorite Blackberry Cobbler tonight!

We also picked up pork barbecue to bring to my parents’ house for lunch!

Since it was 95 degrees and humid outside, we took a short walk, but otherwise stayed cool indoors for the afternoon.

Mom continues to heal and get stronger every single day, so I quickly realized that she needs less and less help from me when I’m there. We visit and offer some entertainment, but she’s moving around and basically self-sufficient at this point (which is amazing to say, given the ordeal that she went through).

Finally, we made our way back home for the evening, picking up a grocery order along the way. I had some ground turkey in the freezer that I wanted to use, so I decided on my Greek Turkey Burgers with Tzatziki Sauce. On the side, I made a simple green salad and baked some frozen mini spanakopita triangles that my mom gave me from her freezer. YUM!

And since I’m sure some of you are wondering…no, my boys do not eat these burgers! I just set aside some extra meat and they had plain burgers instead.????

I’ve never posted the burger recipe on the blog, so here it is in case you want to give them a try as well! The patties would be great served on top of a Greek Salad for a lighter meal, too…

These light and healthy burgers are bursting with fresh Mediterranean flavor!

And I finished yet another book that evening! While Death in Brittany got off to a slightly slow start, this was a great mystery. It’s the first in a series, and I’m sure I’ll read the rest as well. Highly recommend! I loved reading about the French coast and culture, as well.

Commissaire Georges Dupin, a cantankerous, Parisian-born caffeine junkie recently relocated from the glamour of Paris to the remote (if picturesque) Breton coast, is dragged from his morning croissant and coffee to the scene of a curious murder. The local village of Pont-Aven—a sleepy community by the sea where everyone knows each other and nothing much seems to happen—is in shock. The legendary ninety-one-year-old hotelier Pierre-Louis Pennec, owner of the Central Hotel, has been found dead.

A picture-perfect seaside village that played host to Gaugin in the nineteenth century, Pont-Aven is at the height of its tourist season and is immediately thrown into an uproar. As Dupin delves into the lives of the victim and the suspects, he uncovers a web of secrecy and silence that belies the village’s quaint image.

We spent Saturday morning at the house, while I tested a few new recipes and the boys played.

All of these warm, sunny days and afternoon thunderstorms have the flowers thriving at the moment!

I took the boys to the pool to burn off some energy after lunch. There aren’t many other options when it’s over 90 degrees and humid in Central Virginia!

And for dinner that night, I made some baked chicken nuggets for the boys (using a similar recipe to these Parmesan Ranch Chicken Tenders). We had the chicken with Mom’s Marinated Vegetable Salad and tater tots. The kids were happy with that menu (and I’ll share the chicken nuggets recipe soon)!

So there you have it! Another week full of easy dinners and summer adventures! I hope that you’ve found a handful of new ideas to try in your own kitchen in the week ahead. Thanks so much for stopping by!