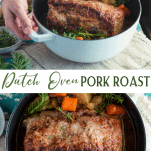 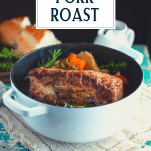 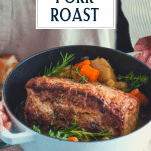 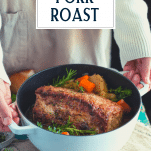 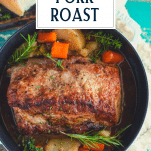 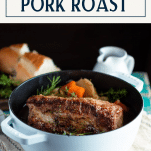 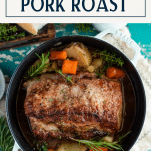 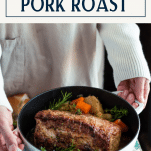 Tender and juicy, this Dutch Oven Pork Roast transforms an affordable cut of meat into a delicious comfort food dinner. The pork loin slowly bakes in an apple cider broth with potatoes, carrots, celery, onion and herbs. A quick pan gravy adds the perfect finishing touch on the one pot meal. Serve this simple boneless pork roast recipe with a side of flaky buttermilk biscuits or a pan of cornbread for your next cozy Sunday supper!

Nothing beats the comfort of a juicy and tender Dutch oven pork roast in the oven. The aroma that wafts through your home as it cooks is like a warm hug from your grandmother! This melt-in-your-mouth easy dinner recipe yields succulent pork loin and flavorful vegetables that have soaked up all of the juices from the meat. Finish it off with a quick pot roast gravy for the ultimate Sunday supper!

A "pot roast" is a braised meat dish that's made by searing a large cut of pork (usually an inexpensive roast) and then slowly cooking the meat in a covered dish called a Dutch oven. You can use many different cuts of meat for a pork roast, including a pork shoulder (or Boston butt), a sirloin roast, or a boneless pork loin roast. I opted for the boneless pork loin roast, which is smaller and more tender than the pork shoulder. As a a result, the loin cooks faster and doesn't need the extended slow roasting time required with a pork shoulder (or Boston Butt).

Pork Loin vs. Sirloin vs. Tenderloin

All of these different cuts from the loin can get confusing when you're staring at a meat case in the grocery store! In general, a loin is the portion of meat running along the back of the pig. The "pork loin" is near the center, while the "sirloin" is toward the rear. The tenderloin is a small strip of meat hanging underneath the pork loin. The tenderloin typically weighs just one pound, and is incredibly tender because it's a part of the animal that doesn't perform any tough work.

Since pork tenderloin is naturally lean and tender, it does well when cooked quickly at high temperatures. By contrast, pork loin and pork sirloin lend themselves well to slower roasting and grilling techniques (giving any tough fibers a chance to slowly break down).

Why use a Dutch oven for a pork roast recipe?

Many folks prefer the convenience of a Crock Pot slow cooker or even an Instant Pot, but I find that the Dutch oven yields the best tasting pork pot roast every time.

Dutch ovens are made from cast iron, so they retain and evenly distribute the heat. Plus, the tight-fitting lid traps the moisture inside the pot -- resulting in the juiciest pork loin roast that you will ever taste. Instead of a dried-out piece of meat that has been cooked to death in a slow cooker, you can easily control the cooking time of both the pork and the potatoes when using a Dutch oven. It's the way to go!

This is just a quick overview of the ingredients that you'll need for the boneless pork roast recipe. As always, specific measurements and step-by-step instructions are included in the printable recipe box at the bottom of the post.

How to Cook a Dutch Oven Pork Roast

This particular Dutch oven pork pot roast recipe works so well because you wait to add the potatoes to the pot during the final 40 minutes so that they don't get overcooked and mushy. The vegetables, pork and herbs flavor the rich juices that are further enhanced by a touch of apple cider.

How Long to Cook a Pork Roast

As a general rule of thumb, you want to cook the boneless pork loin roast at 350°F for about 20 minutes per pound. In this case, a 4-lb. roast needs about 1 hour, 20 minutes in the oven. Always check the roast early, though. The heat of the Dutch oven often speeds up the cooking time, so you might find that your pork is done within about 70 minutes.

What temperature should a pork loin roast be cooked to?

Ultimately, an instant read meat thermometer is the best way to know when your pork loin is perfectly cooked. It's done when it reaches an internal temperature of 145˚F. Since the temperature of the meat will increase slightly as it rests, it's fine to pull the pork out of the oven when it gets to about 140-145˚F.

What to Serve with Dutch Oven Pork Roast

An easy pork loin roast makes a delicious Sunday supper. Pair the juicy meat, veggies and potatoes with any of these extra sides:

Leftover pork will keep in an airtight container in the refrigerator for 3-4 days, or wrapped tightly in the freezer for up to 3 months. Reheat the pork in a 325°F oven just until warmed through (about 15-20 minutes). You can also reheat smaller amounts of pork in the microwave. We love to enjoy the leftover thinly-sliced meat on sandwiches with barbecue sauce the next day! 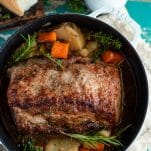 For the Optional Gravy: