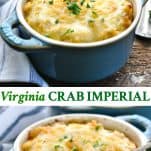 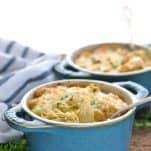 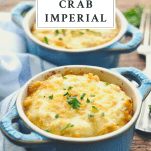 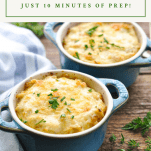 Any native Virginian has probably enjoyed the sweet, savory and rich taste of Crab Imperial. This traditional dish is made with lump crabmeat, topped with Parmesan cheese, and baked in the oven until golden brown. It tastes fancy, but the easy recipe is ready with just 10 minutes of prep!

Those of us raised in the southeast (and in Maryland) are very familiar with the wonder of blue crabs. The Chesapeake Bay and the Tidewater region are full of the popular shellfish, so dishes like Crab Cakes and Crab Imperial are practically a way of life. These recipes have become an ingrained part of the local culture, and most home cooks have their own favorite version.

What is Crab Imperial?

Crab Imperial is a classic American dish made with crabmeat that has been combined with mayonnaise or a sherried white sauce, and spooned into blue crab shells or scallop shells. The crab mixture is topped with Parmesan cheese or bread crumbs and baked until golden brown.

Crab Imperial tastes sweet and savory, and is very similar to crab cakes without the filler. Since it contains many of the same ingredients as a traditional crab cake recipe, Crab Imperial basically tastes like a baked crab cake in a casserole dish! We're not adding breadcrumbs or cracker crumbs to bulk up the dish. Instead, each individual serving is bursting with lump crabmeat in a creamy, delicately seasoned sauce.

How to make Crab Imperial:

You can certainly serve your Crab Imperial in shells, but I've used individual ramekins here for ease. You can also bake one larger casserole dish if you prefer. It's an easy 30-minute meal. Let's get started!

Jumbo lump crab meat is the best of the best! While it’s also the most expensive crab that you can purchase, it’s well worth the investment for special occasions. Nothing else has the same rich, buttery texture, bright white appearance, and large chunks.

I buy the refrigerated jumbo lump crab in the seafood section at the grocery store (not the canned version). This crab meat is fully cooked and ready to use in recipes.

If you don’t want to splurge on a container of jumbo lump crab meat, you can also use lump crab meat (which is a little bit smaller than the jumbo lump) or even backfin crab meat (or a combination of these). I do not recommend using canned crab or claw crab meat for this recipe.

Cook the red bell pepper and the onion in butter just until soft. Allow the vegetables to cool.

Add the cooled vegetables and the crabmeat, and gently stir to combine.

Spoon the mixture into individual ramekins or one 1-quart dish.

Spread a dollop of mayonnaise on top of each dish and sprinkle with Parmesan cheese.

Bake the dishes in a 400 degree F oven for about 20 minutes, or until the top is golden brown and the filling is bubbly.

How to serve Crab Imperial:

Crab Imperial is served as both an appetizer and as an entree, and is best warm from the oven. Since crabmeat is expensive, serving smaller portions as appetizers in scallop shells can be a nice way to stretch the quantity that you have.

The Crab Imperial also makes a great special occasion dinner. A little bit goes a long way (thanks to all of those rich ingredients), so a small 8-ounce ramekin should feed one person. Pair the dish with a couple of lighter sides for the perfect meal!

This Crab Imperial recipe is a keto-friendly low-carb dish. Each serving has about 433 calories, 36 grams of fat, 22 grams of protein and only 1.3 grams of carbohydrates. 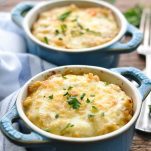