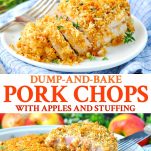 Welcome autumn with an easy one dish dinner recipe! These Dump-and-Bake Boneless Pork Chops with Apples and Stuffing are full of flavor, require just a few minutes of prep, and stay moist and tender thanks to a couple of special tricks. This meal is a total weeknight game-changer! 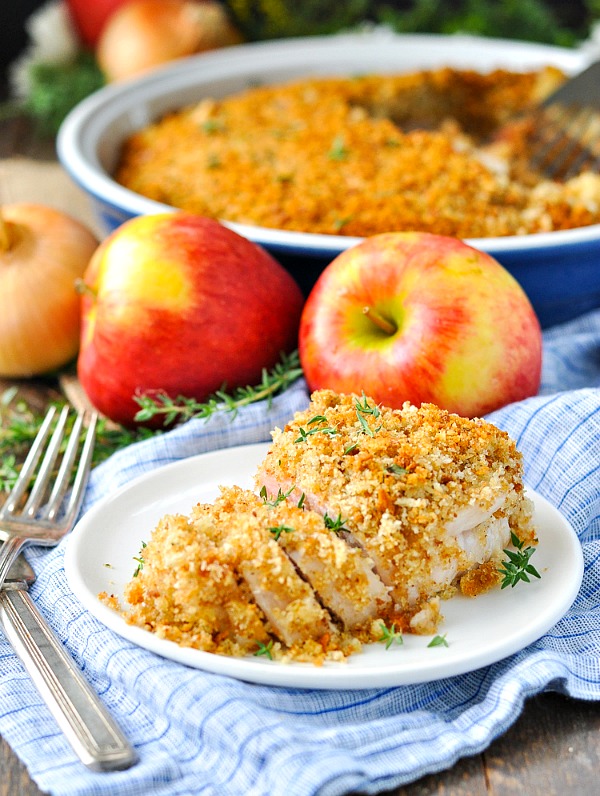 Is it lame that I'm SO EXCITED about a pork chop recipe? Don't answer that...

But hear me out, because after one bite of these boneless pork chops I think you'll be pretty darn thrilled too!

This meal has completely changed my mind about boneless pork chops, which I previously assumed to be dry and rather flavorless. That's probably why you won't find many boneless pork chop recipes on this blog...until now!

If you've held similar beliefs about the affordable meat, then I'm about to change your mind!

What good is a tasty dinner recipe if it takes for-ev-er to make? I don't know about you, but I certainly don't have the time (or the desire) to spend up to an hour in the kitchen each night, just to serve a meal that my family devours in about 10 minutes. No, thank you!

Instead, I need quick-prep options that require minimal effort and minimal ingredients -- but that deliver MAXIMUM flavor! It kind of makes me look like a Super Mom (and my husband and kids don't need to know my secrets)! 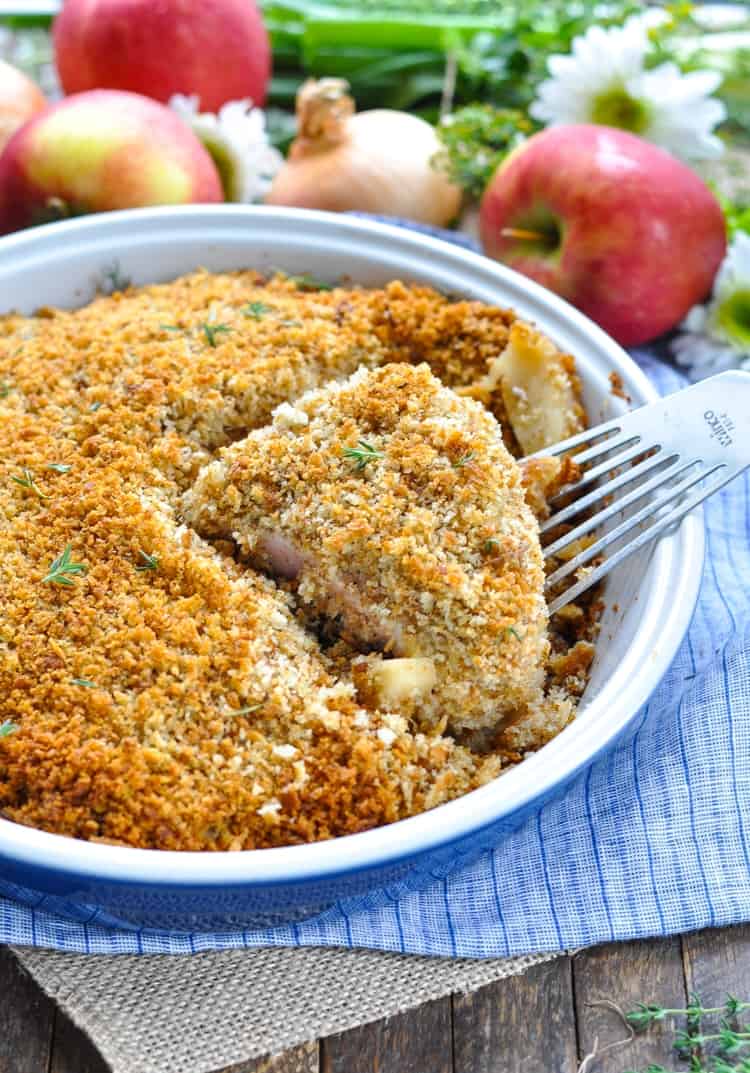 The best part about this particular recipe is that you can toss everything in one dish and then let the oven do the work.

Are you ready?! Here's how it goes:

How To Make Boneless Pork Chops with Apples And Stuffing

You'll start by placing the sliced apples and sliced onions in the bottom of a baking dish. I used a 10-inch round dish here, but any pan that accommodates your pork chops will work fine!

Place your boneless pork chops on top of the apples and onions (no browning in a skillet first, thank goodness!), and the pour a simple little sauce over top. 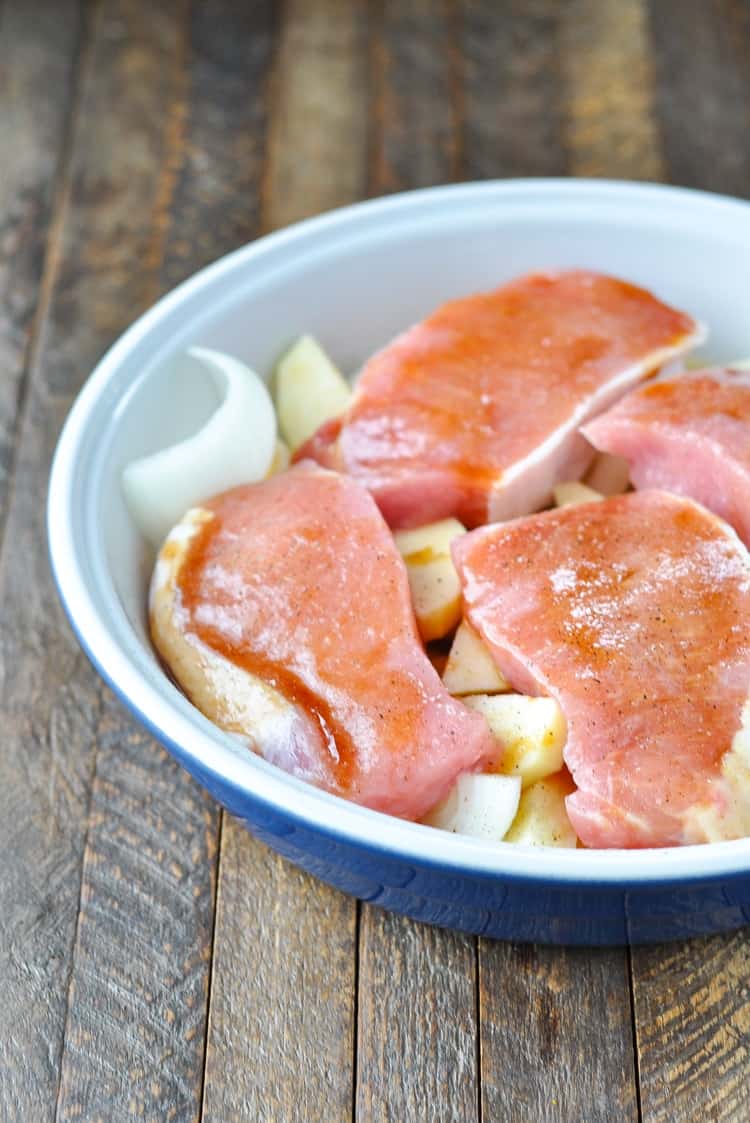 As if the apples, onions, and sauce don't give the pork enough flavor already, then it's time for the stuffing! And since this is a dump-and-bake dinner, you don't even have to prepare the stuffing before adding it to your casserole.

Just stir together melted butter and dry stuffing mix, and then spread that over your uncooked boneless pork chops. 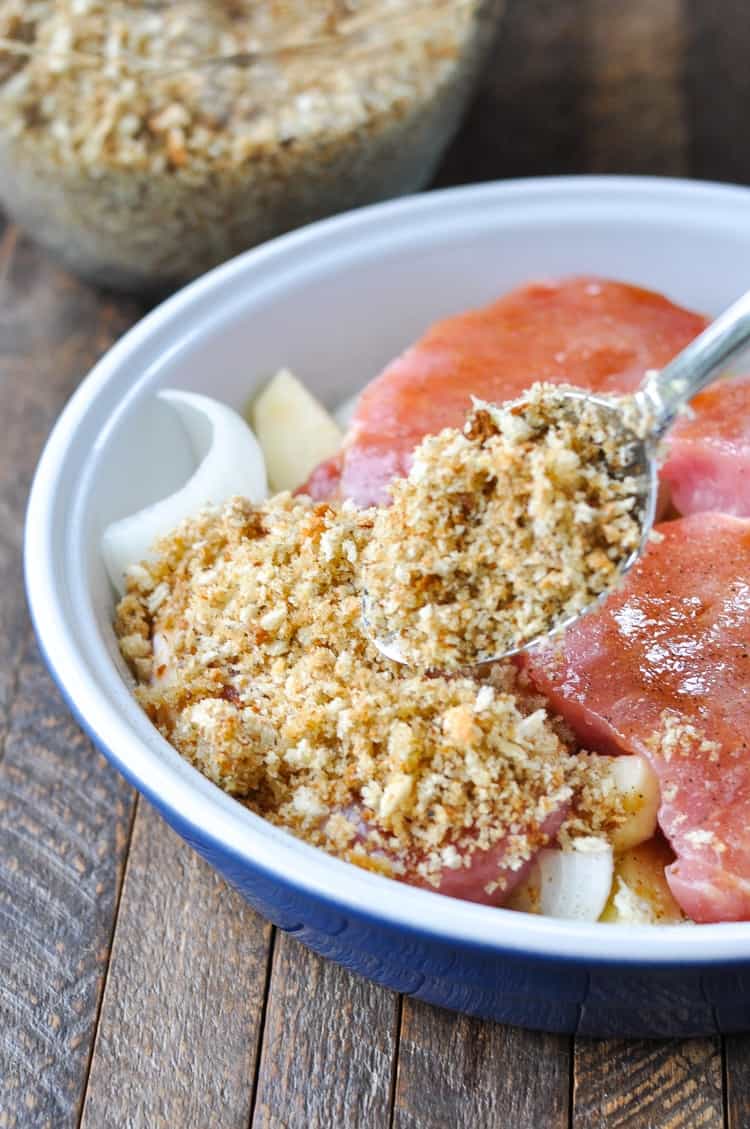 You should have a nice, thick layer of stuffing covering the top of your dish. 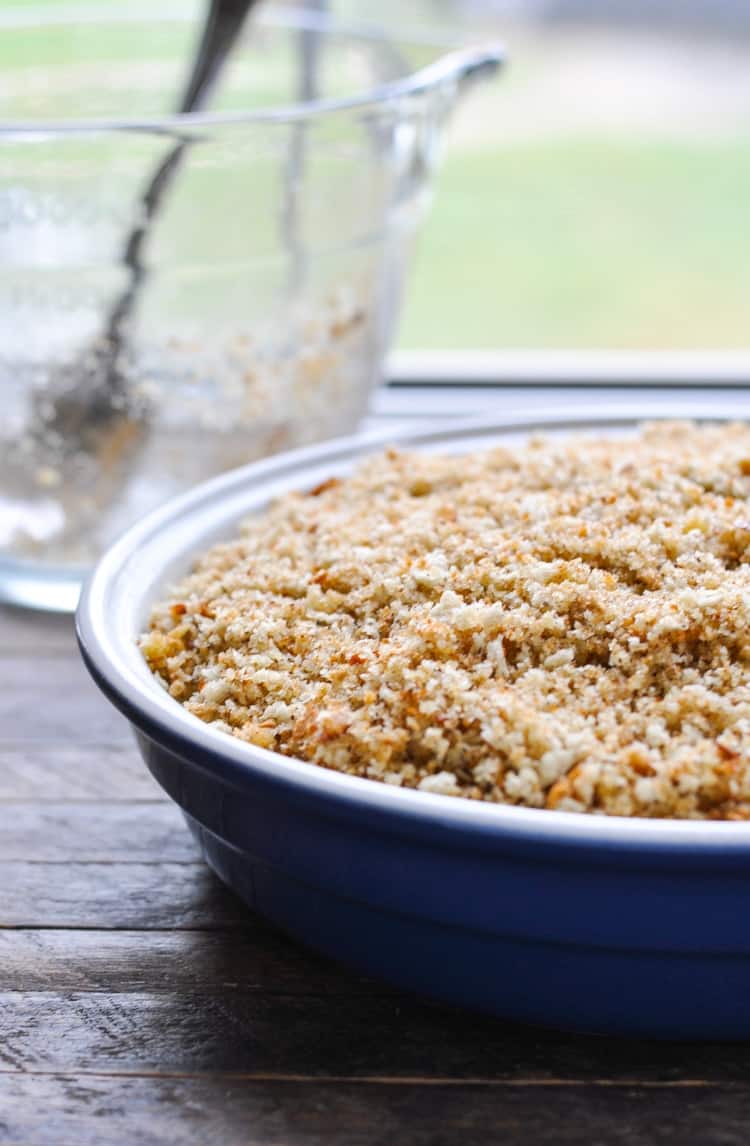 With some aluminum foil on top to hold in the moisture, the boneless pork chops are ready for the oven. That's all there is to it! 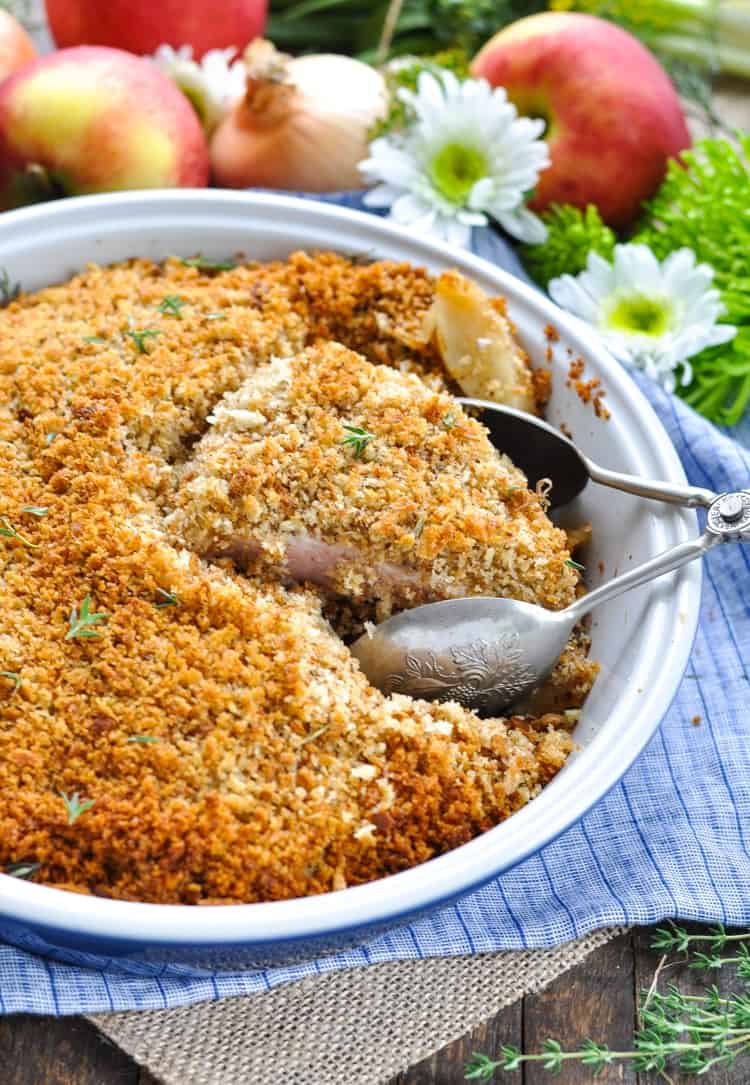 You'll want to remove the foil during the final few minutes of baking so that the topping has a chance to brown and get a bit crispy. The end result is a flavorful crumb coating over the moist, tender meat! Plus, is there anything better at this time of year than baked apples?

Your house is going to smell amazing while your dinner cooks! 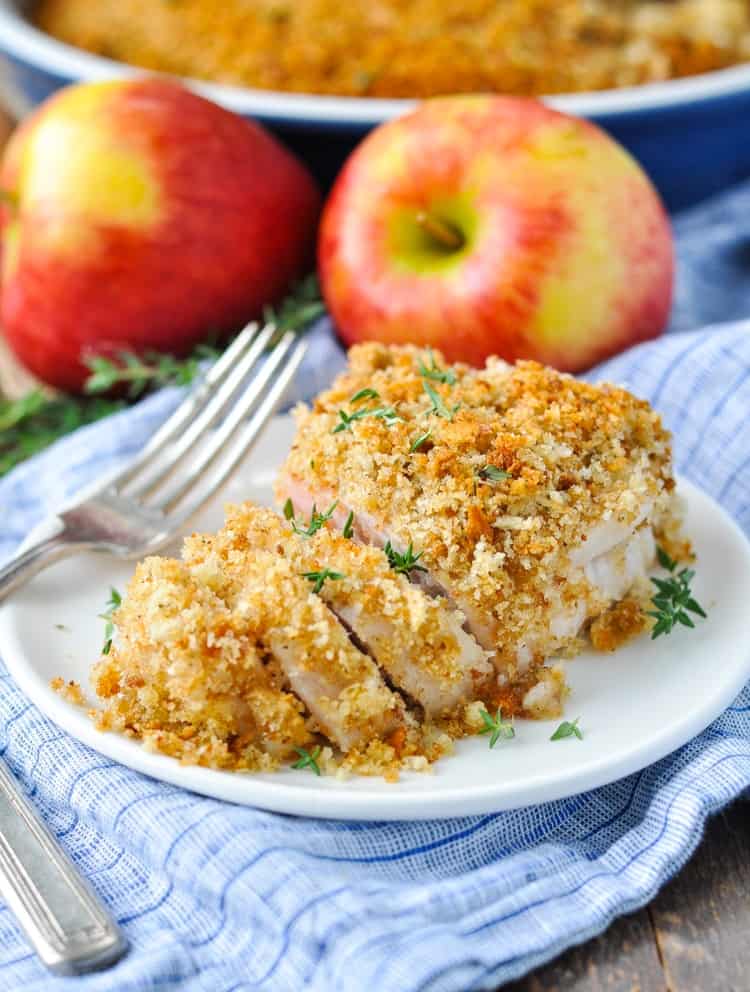 The Trick To Juicy and Tender Boneless Pork Chops

Nothing gets dried out, and the end result is a sweet-and-savory dish that's loaded with satisfying fall flavor! How's that for an easy dump-and-bake dinner?!

I buy my thick-cut pork chops in packages of two, so it's easy to purchase and prepare two pork chops instead of 4! Just cut the remaining ingredients in half as well, and bake in a smaller dish that accommodates two pork chops. The cooking instructions remain the same. 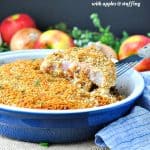 Cooking Just for Two? I buy my thick-cut pork chops in packages of two, so it's easy to purchase and prepare two pork chops instead of 4! Just cut the remaining ingredients in half as well, and bake in a smaller dish that accommodates two pork chops. The cooking instructions remain the same.