Hello, hello! I hope that you're all having a nice weekend! It's Sunday morning, which means that it's time for another round of Our Week in Meals. For those of you who are new around here, this is where I share a little bit about what we’ve been up to over the past week — as it relates to our meals each night. I hope that this series gives you a glimpse “behind the scenes” at some highlights from our life, shows you how I balance a busy schedule with feeding my family, and offers a few new ideas for your own weekly meal plan. Let's backtrack a bit...

Last Sunday started off nicely with a plate of Healthy Chocolate Chip Pancakes (<-- so tasty, and so good for you!). I prepared a batch the week before, so these were just reheated in the microwave for a few seconds. I had yogurt and berries on the side! 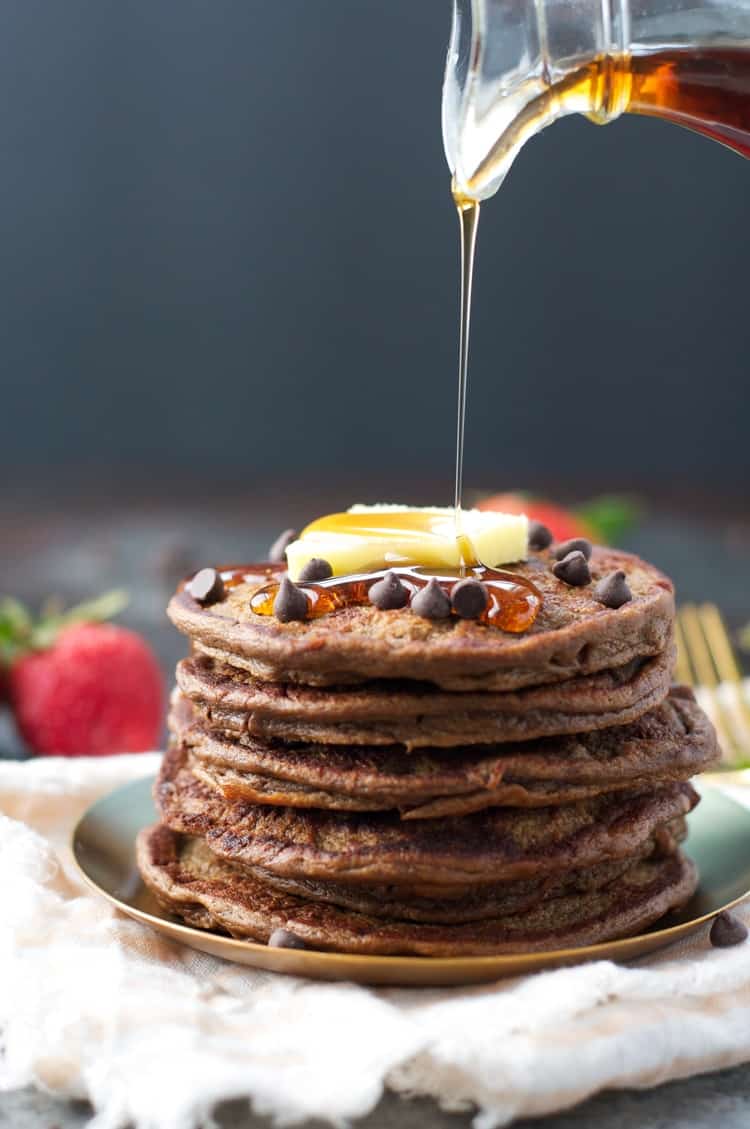 The weather was beautiful, so we took a walk around the property late afternoon. 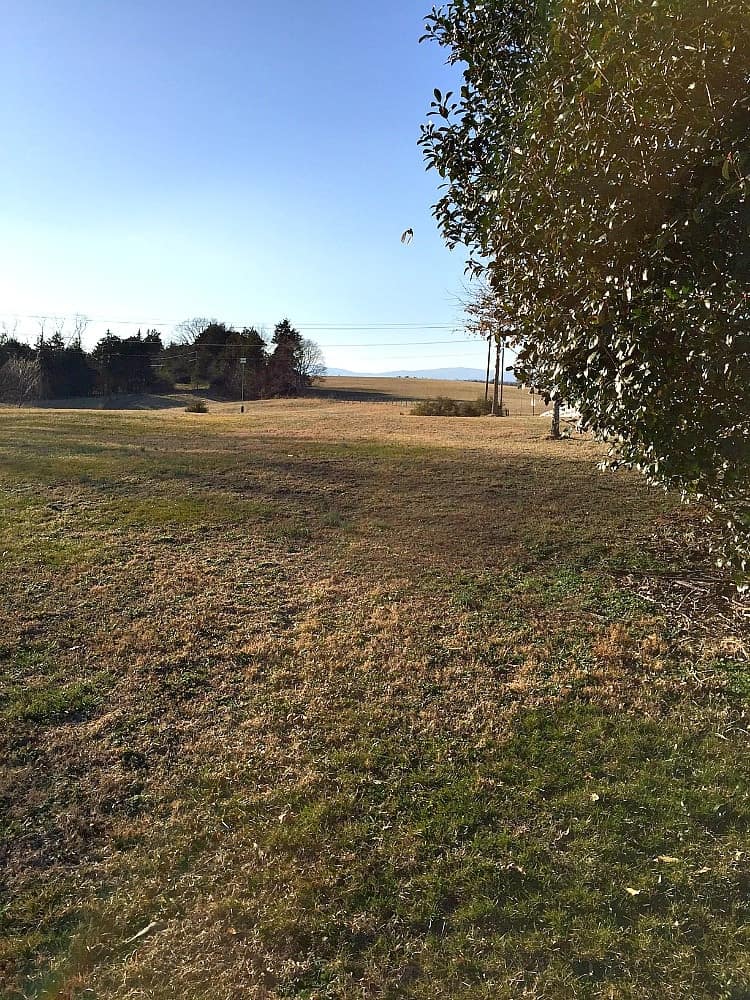 And this guy drove alongside! 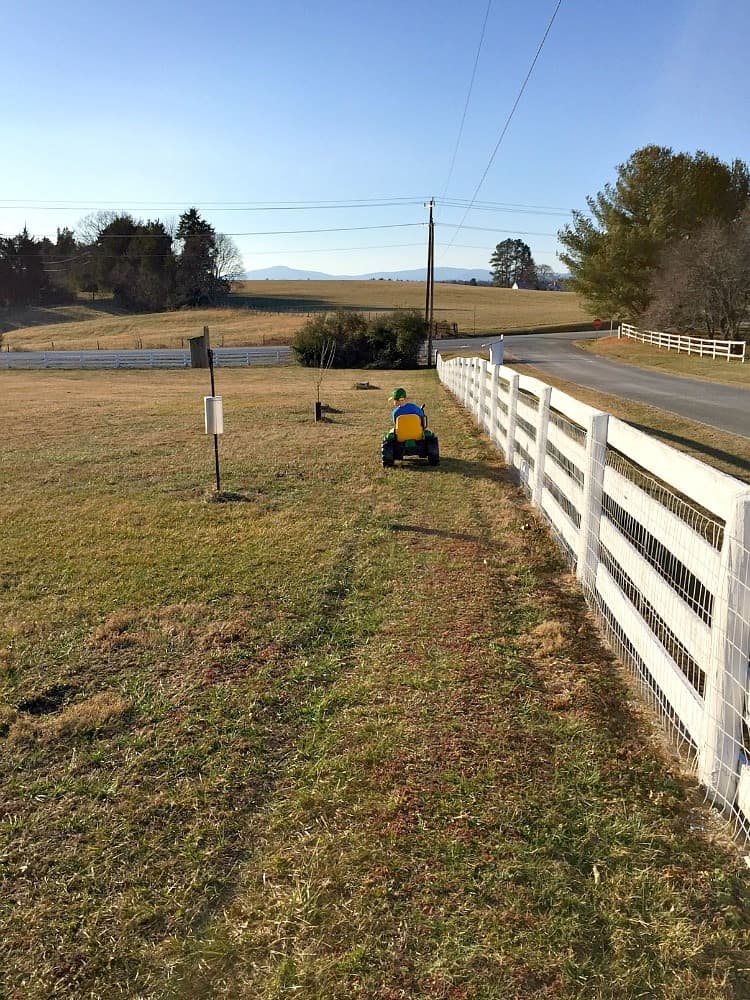 Our Super Bowl dinner was an old blog favorite: Slow Cooker Chicken Nachos! We love this meal and it's SO easy! Just 3 ingredients go into the Crock Pot for the chicken. 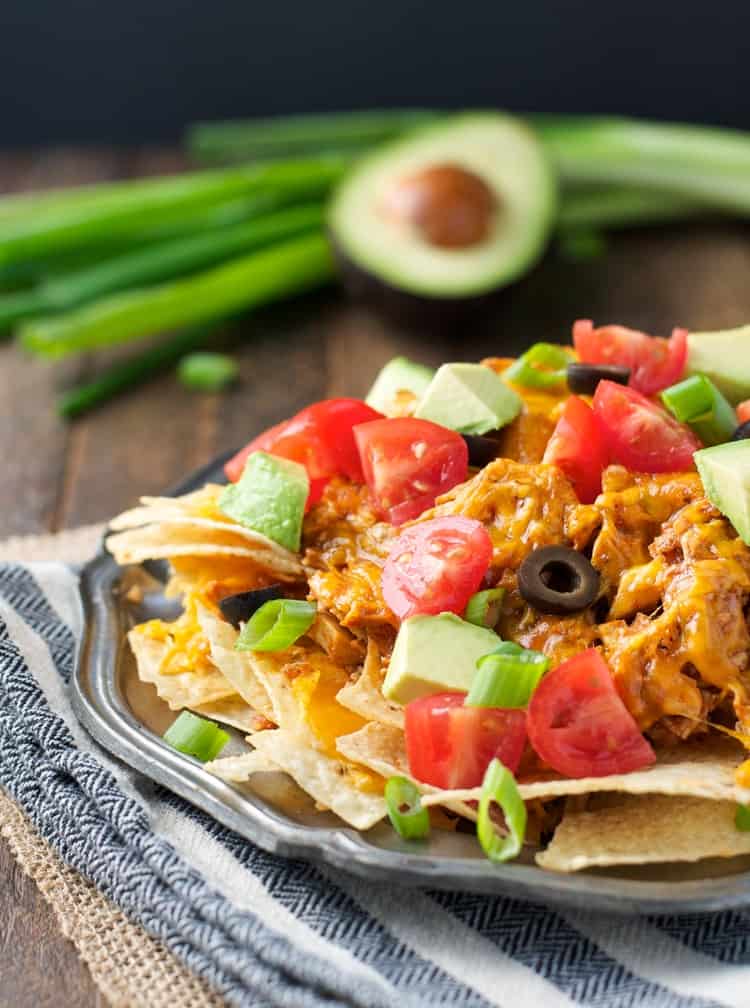 We were back in the routine on Monday morning -- the big kids at school and Spence to tumbling class in Charlottesville. 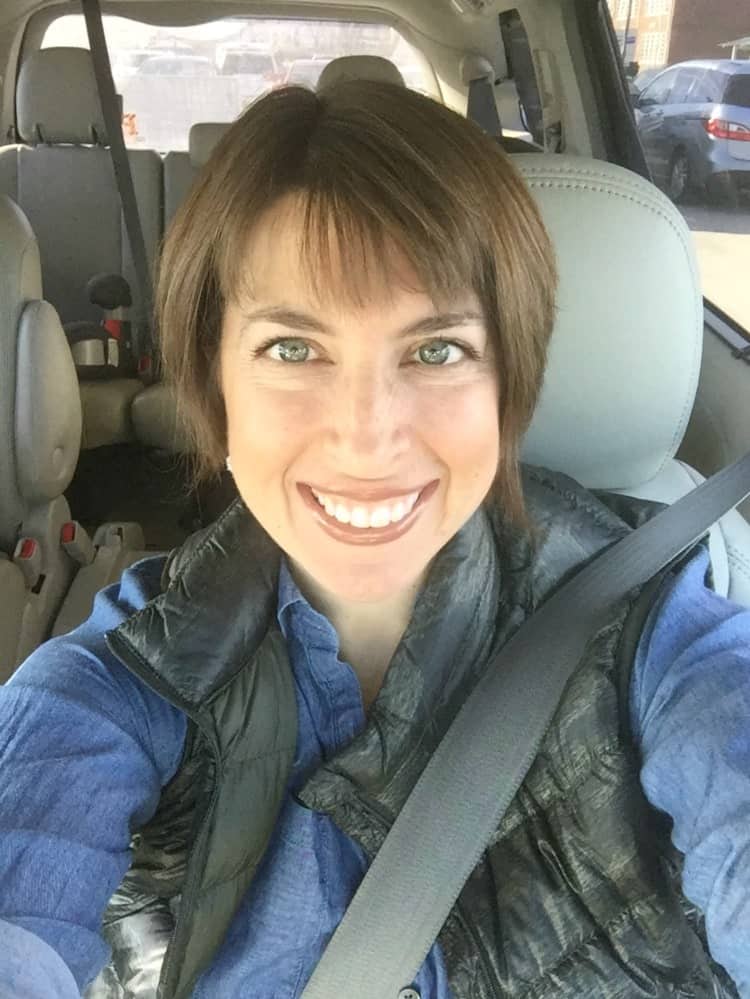 He ran and ran with his friend Jonathan, 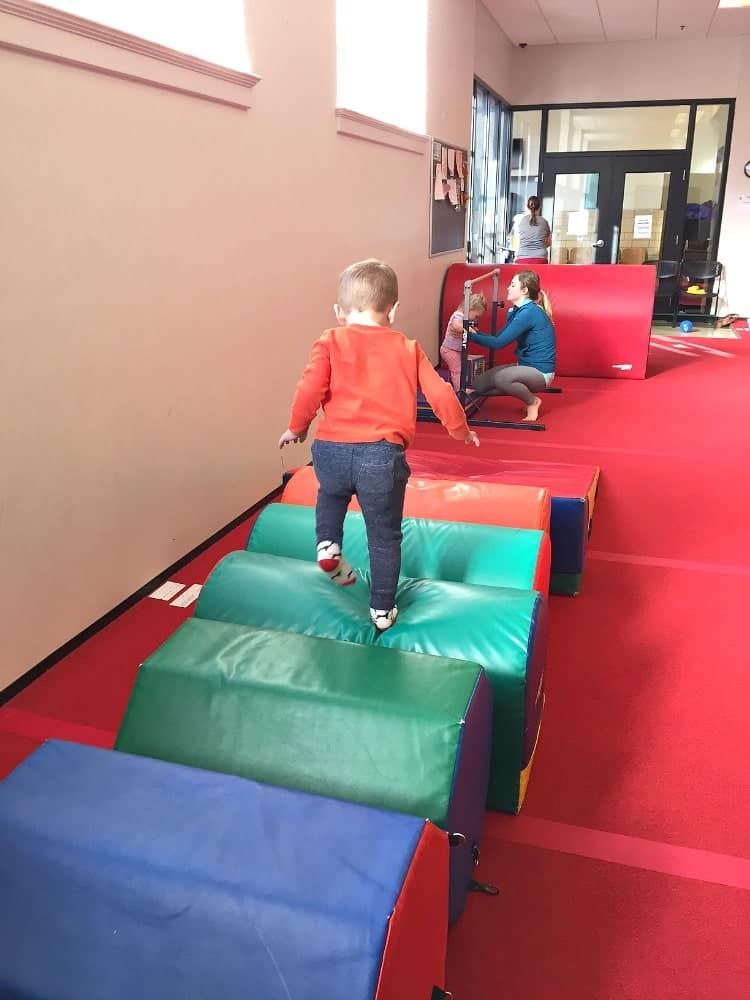 and when class was over Kristin and I took the boys to Chik-Fil-A so that they could play on the equipment while we chatted. It was seriously the BEST way to spend the morning. Plus, the little guy was so exhausted by the end of it all that he slept for a couple of hours that afternoon (which NEVER happens)! Bonus. 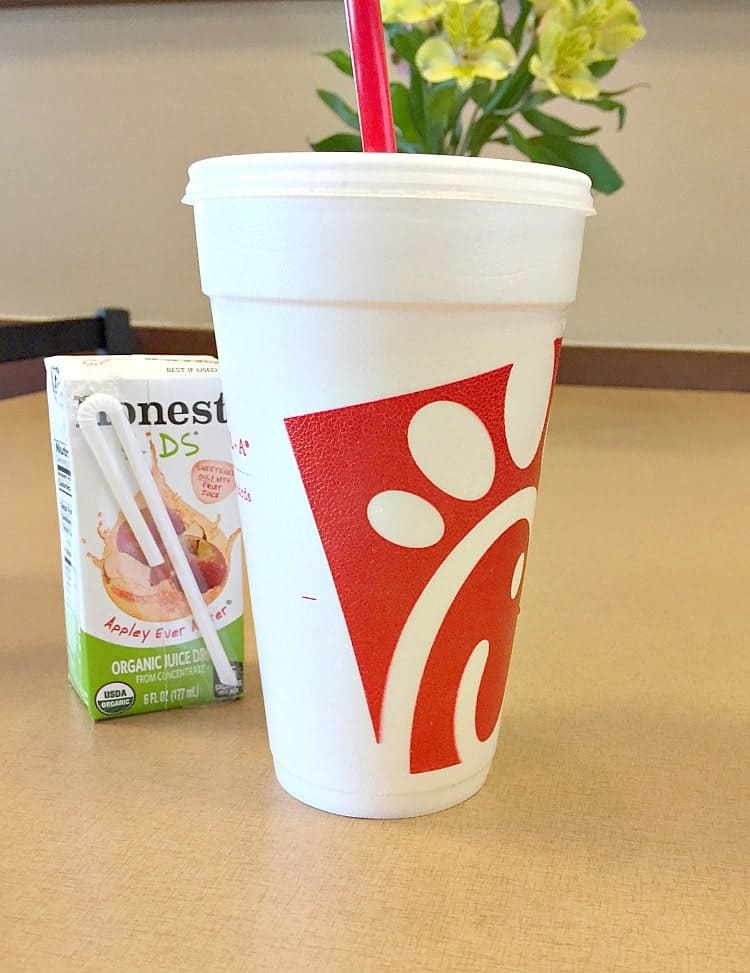 For dinner I made a new recipe that turned out really well. Can't wait to share it here! This was Dump-and-Bake Healthy Chicken Parmesan, with pasta on the side and an unpictured salad. 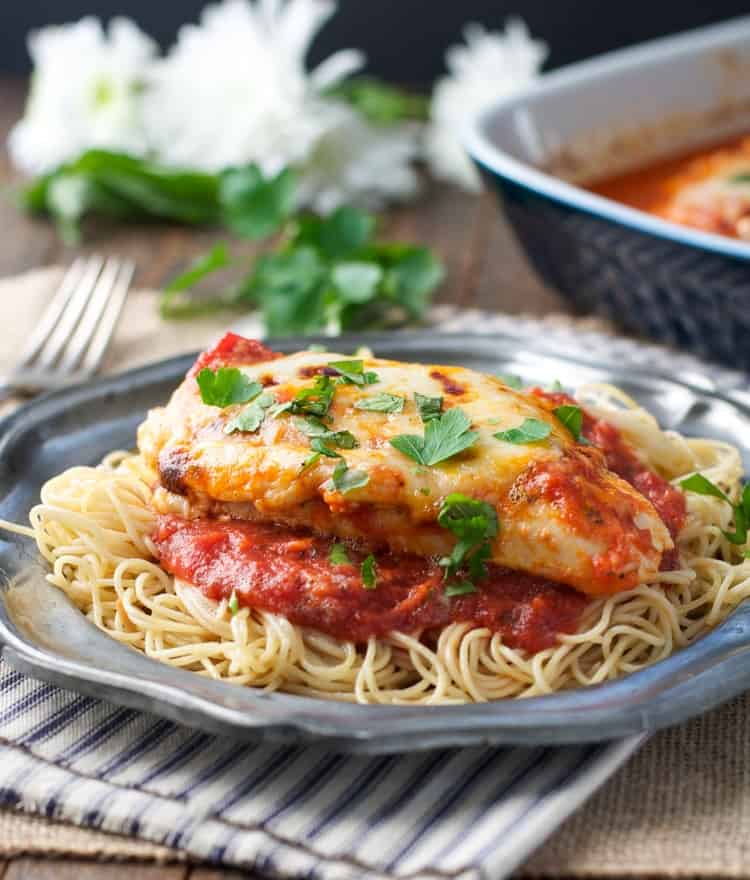 While Spence was at school on Tuesday morning, I squeezed in a walk with my girlfriends (hooray for 70-degree temps!) and made a quick stop at the grocery store. After lunch my assistant joined me in the kitchen for some baking! 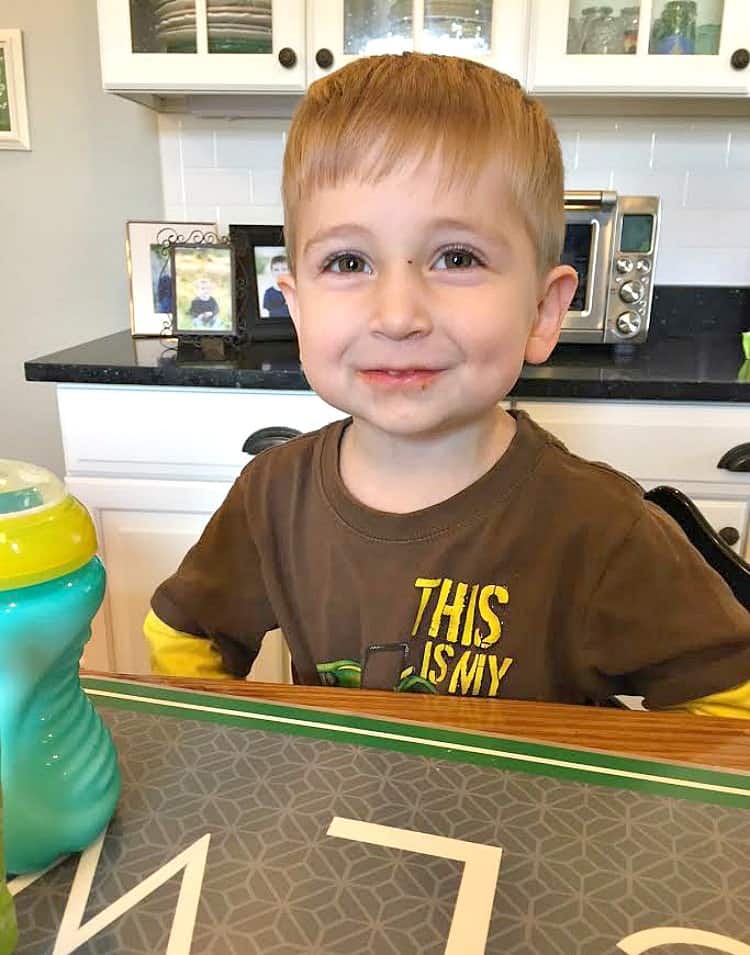 We made a batch of these One Bowl Cinnamon Banana Muffins, which were a great success. The older boys each had a muffin for snack after school, and the rest were stashed in the freezer for weekday breakfasts. 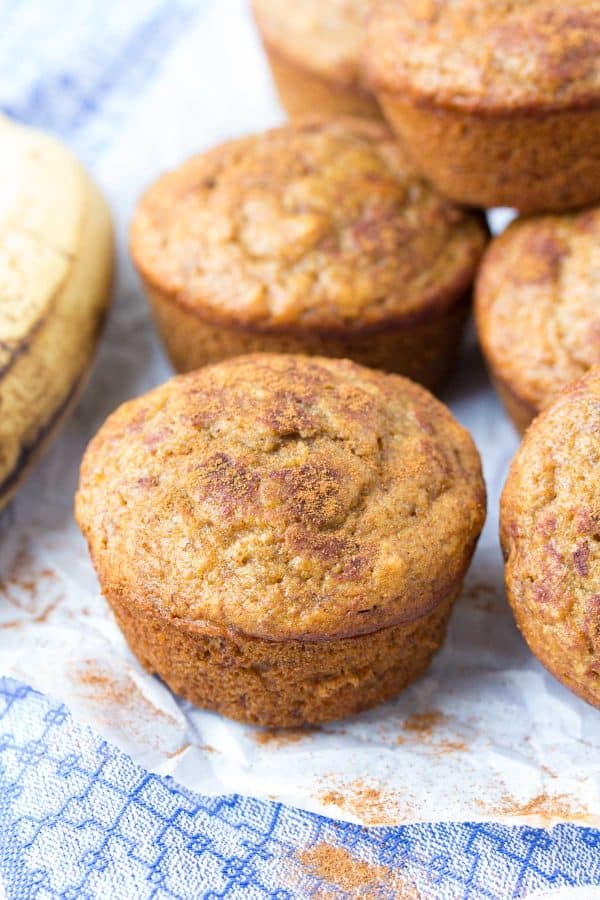 Dinner was an easy Honey Garlic Dijon Pork Tenderloin, which I "grilled" inside on my grill pan. I served the pork with rice and roasted green beans on the side. I will share the pork recipe next month! 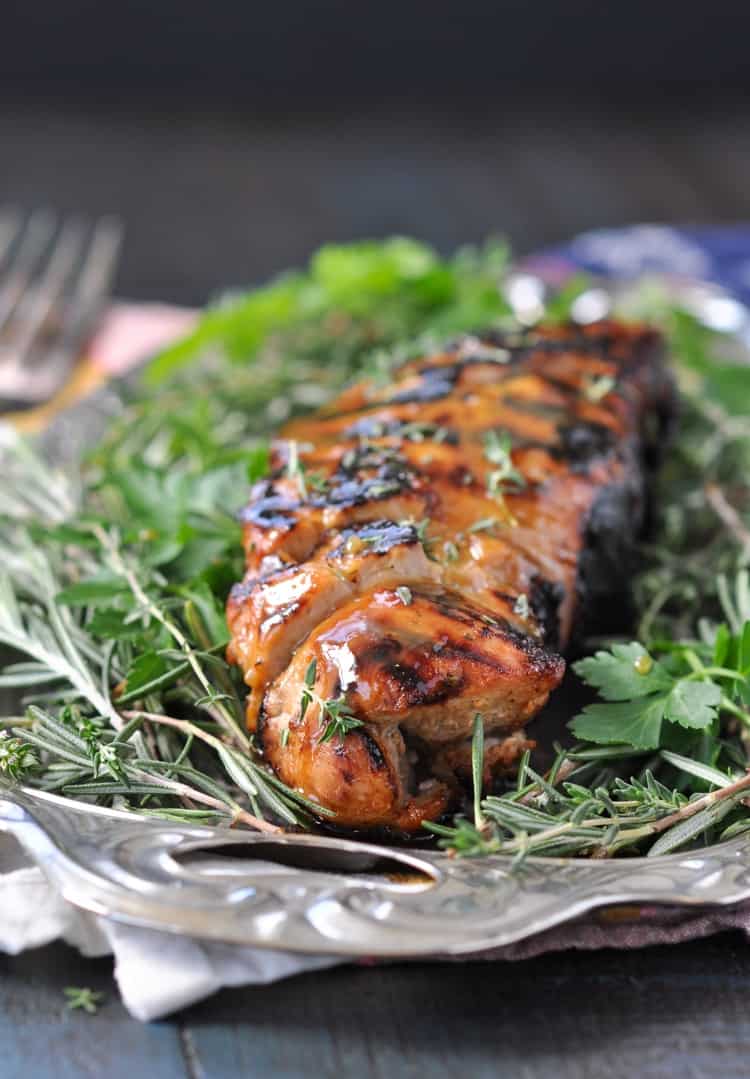 Spence and I spent Wednesday morning in Charlottesville running errands. We made a stop at the mall, where I let him burn off some energy in the play area before even attempting to get him in the stroller. 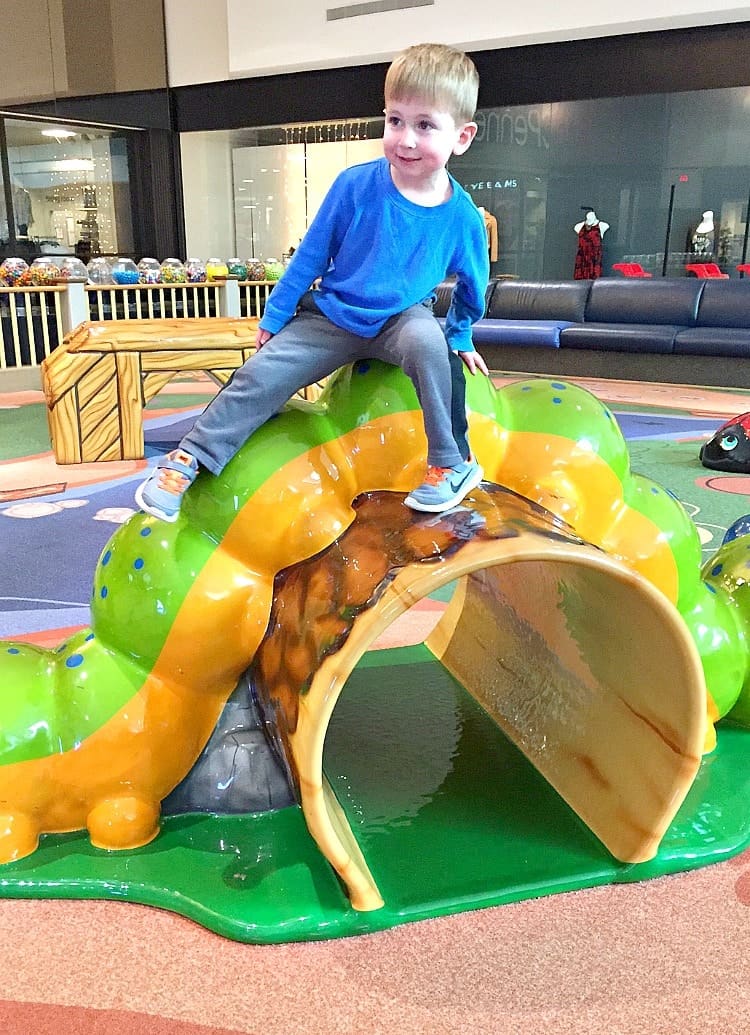 We also made a stop at Costco for our weekly supply of necessities like apples, avocados, milk, berries, and...these Bark Thins. Yes, please -- I'm on board with anything that's called "Snacking Chocolate." 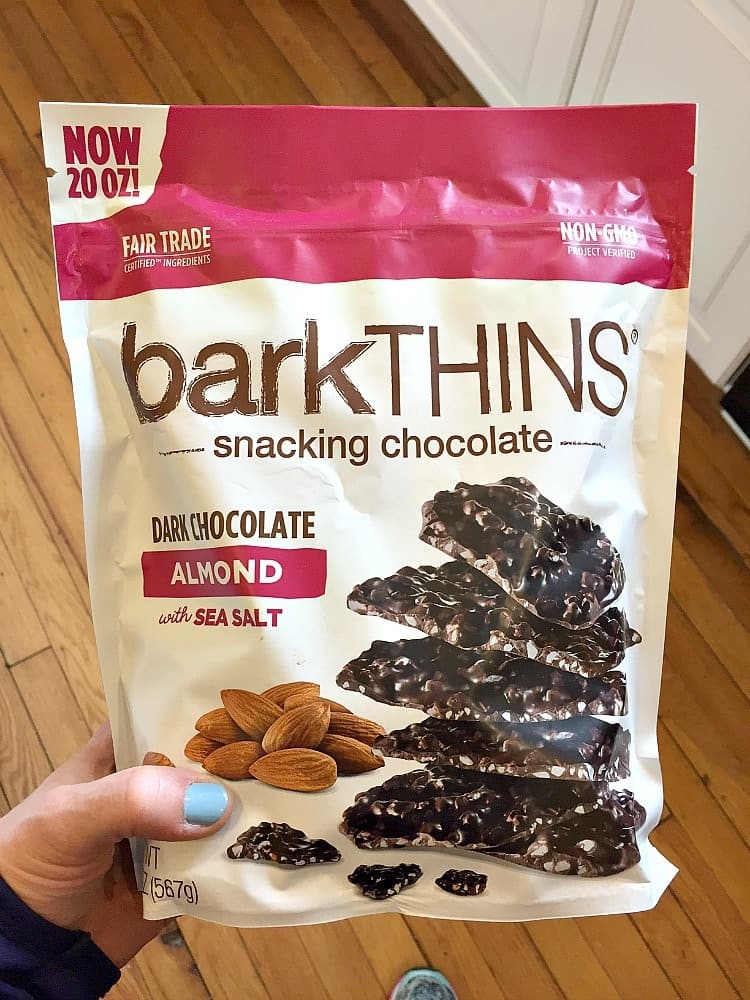 Spence and I both gave the samples of Triple Layer Chocolate Mousse Cake our stamp of approval! 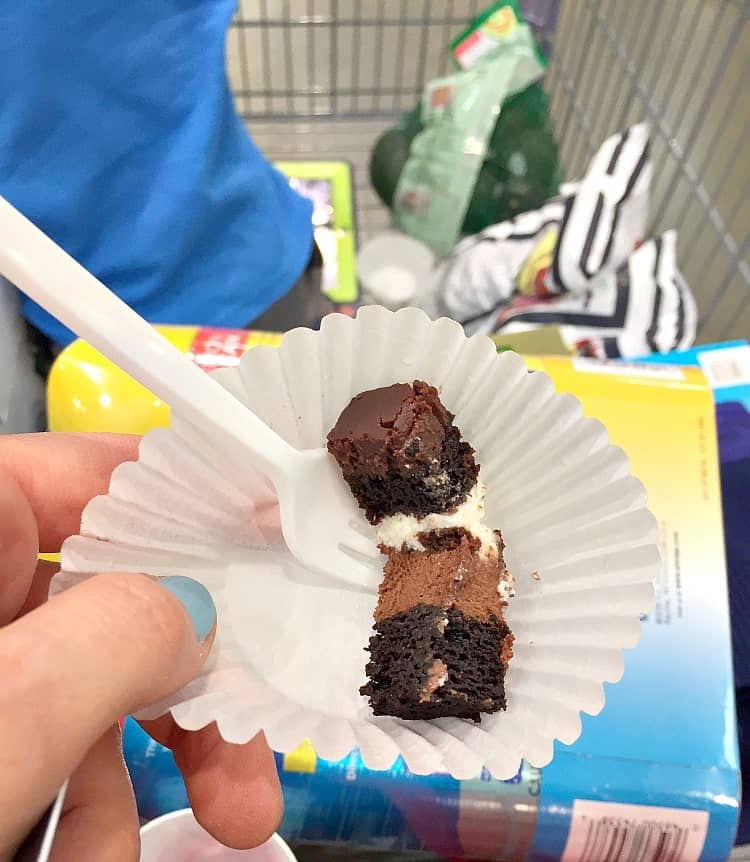 After a late lunch at home, we squeezed in a walk with Mollie before picking up the boys from school. It was 70 degrees and we couldn't miss an opportunity like that in the middle of February!

I had to serve dinner in two stages that evening, since Keith worked late. Fortunately it was an easy meal that I could reheat for him when he walked in the door. This was Guinness Soup (which is basically French Onion Soup with some Guinness beer in the broth). It would be the perfect St. Patty's Day dinner next month! 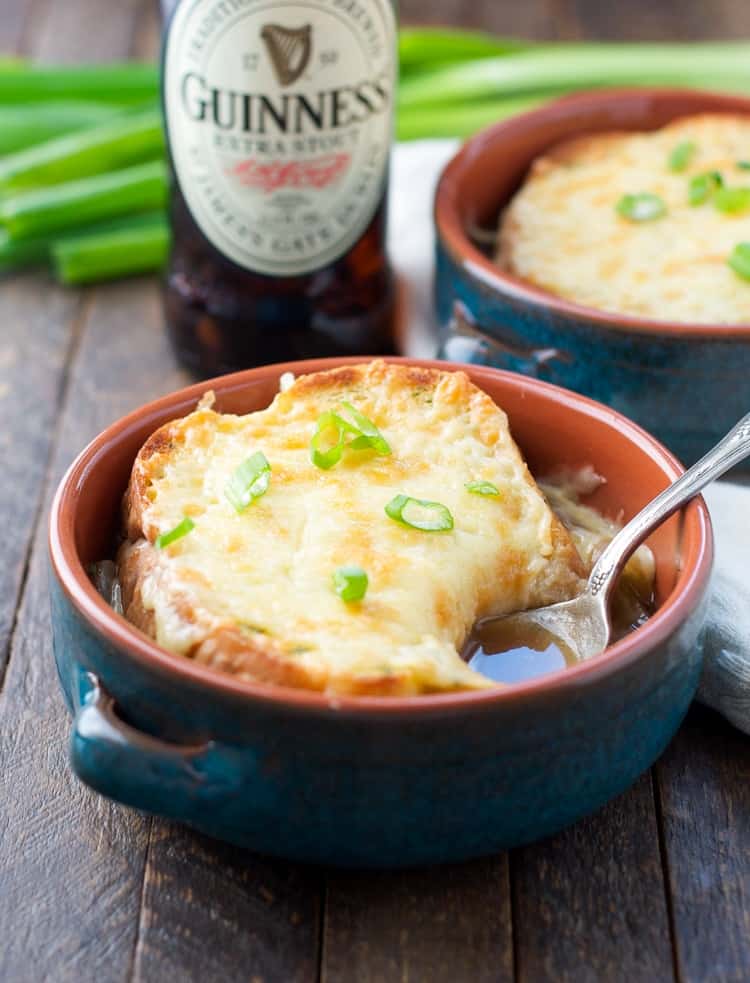 Thursday was a busy one! I had to get the kids out the door and dropped off at their schools, myself dressed (with makeup on!), and the house picked up in time for an 8:15 a.m. video shoot call time. Coffee to the rescue (along with plenty of under eye concealer to try to hide the dark circles)! 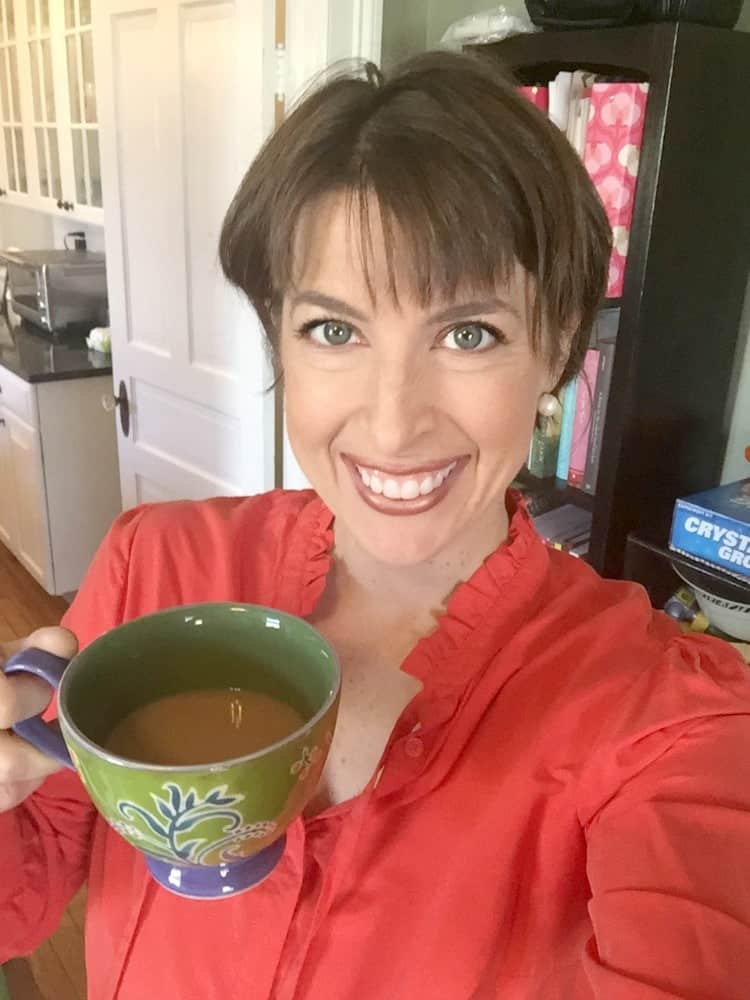 We spent the morning making and filming my Dump-and-Bake Sloppy Joe Casserole, which I will share on the blog very soon. Guess what I ate for lunch when we were done?! 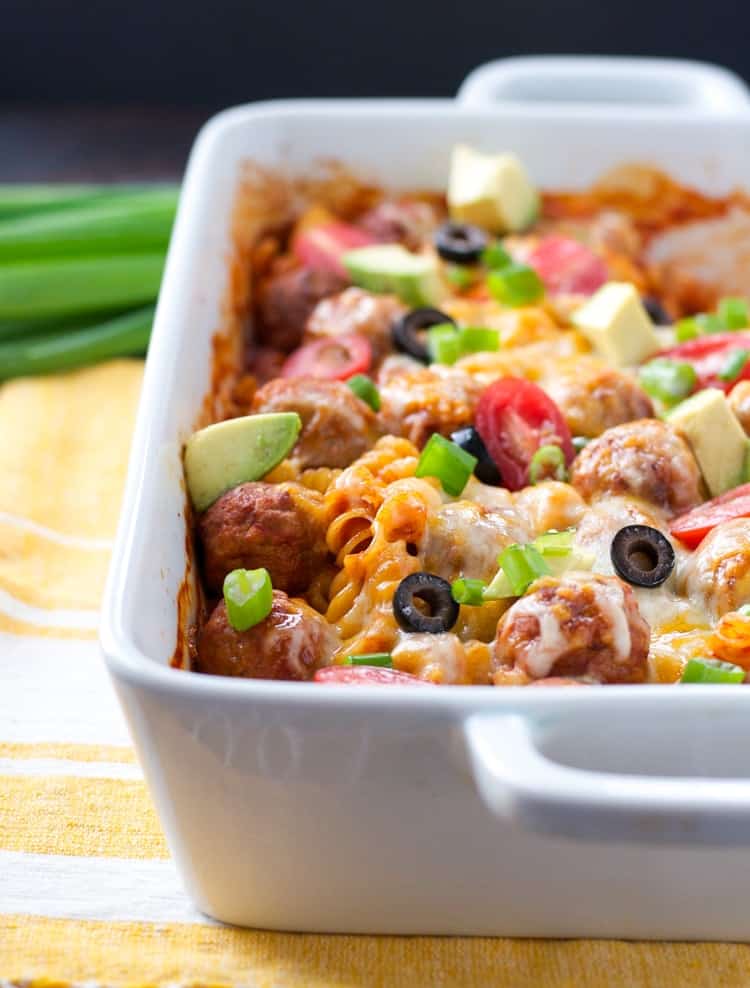 Since I knew that I would be busy all day on Thursday, I planned a really easy dinner for that night -- Herb Roasted Chicken and Vegetables. This was one of my dump-and-bake freezer meals (coming to the blog soon), so I didn't actually have to do anything to make this meal. I just thawed it in the refrigerator overnight and popped it in the oven! 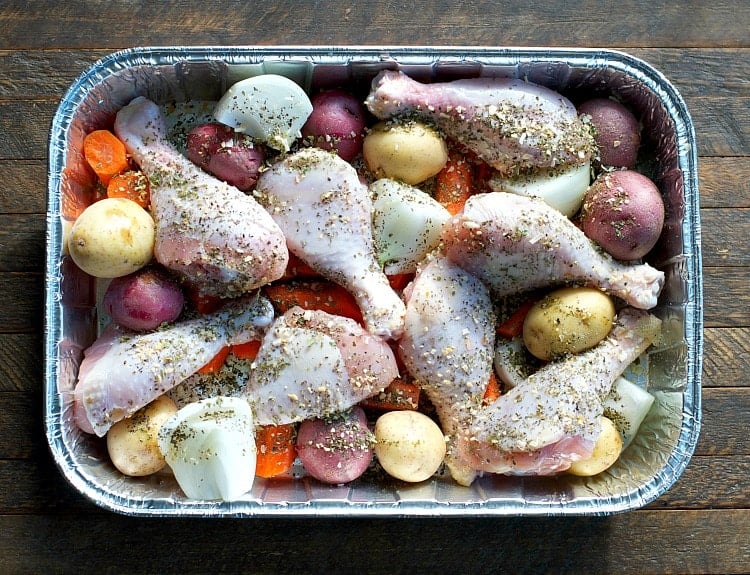 After dropping the older boys off at school on Friday morning, Spence and I headed south to Charlottesville to do our grocery shopping at Whole Foods. I don't always make the effort to get to Whole Foods since it's kind of a long haul, but I knew that the weather would be beautiful over the weekend and I wanted to get some good fish and steaks to grill.

Using the machine to freshly squeeze his own bottle of orange juice was definitely the highlight of Spencer's shopping trip!

This juice is so good, by the way. 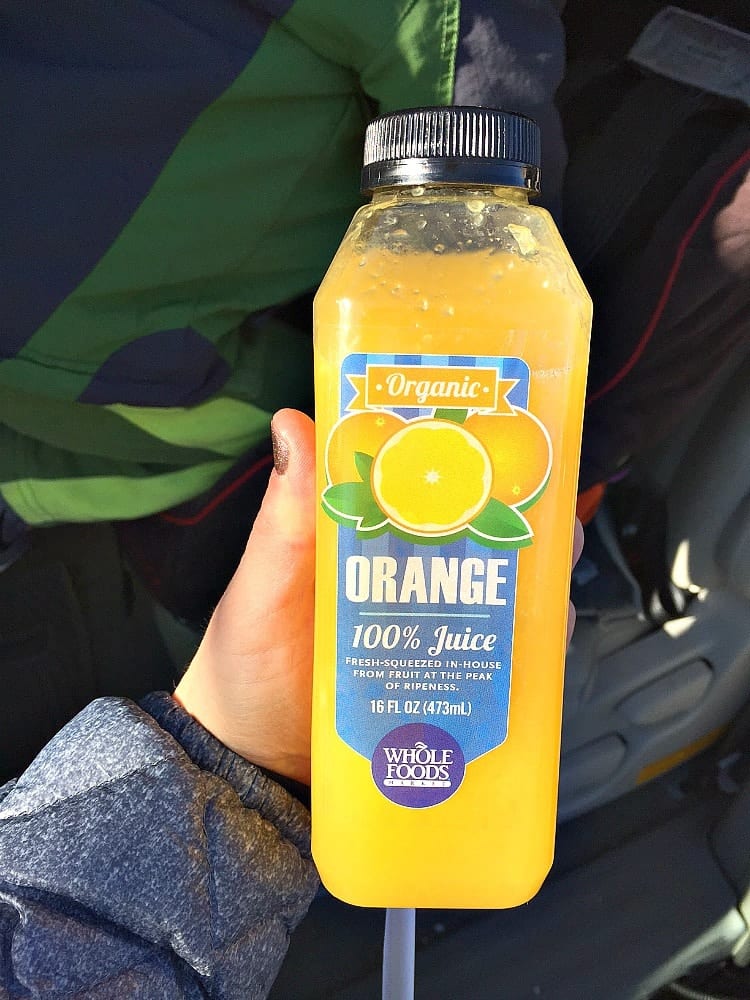 We made it home in time for lunch: this mac and cheese that Spencer just had to have in the store, 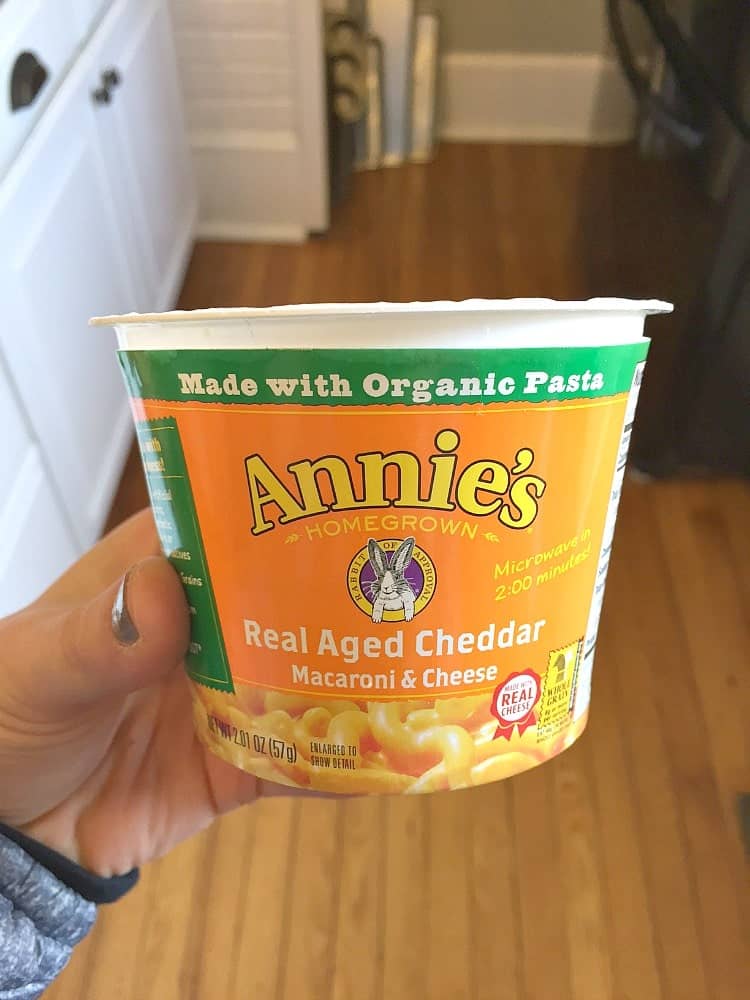 and the Whole Foods salad bar for me + pita bread with vanilla almond butter on the side. Delish! 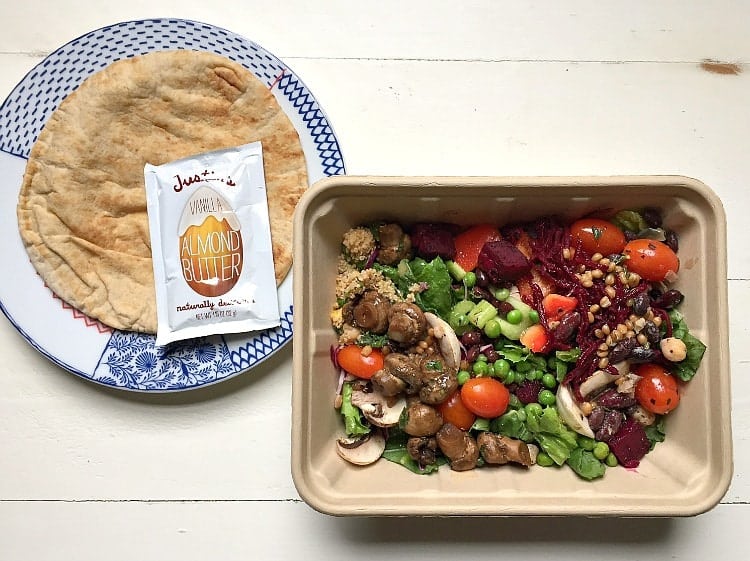 After school pick-up, we headed off on a fun outing to Culpeper. I treated the boys to snack at Sweet Frog before making our way into Target to buy Valentine's Day cards and gifts for classmates and teachers. 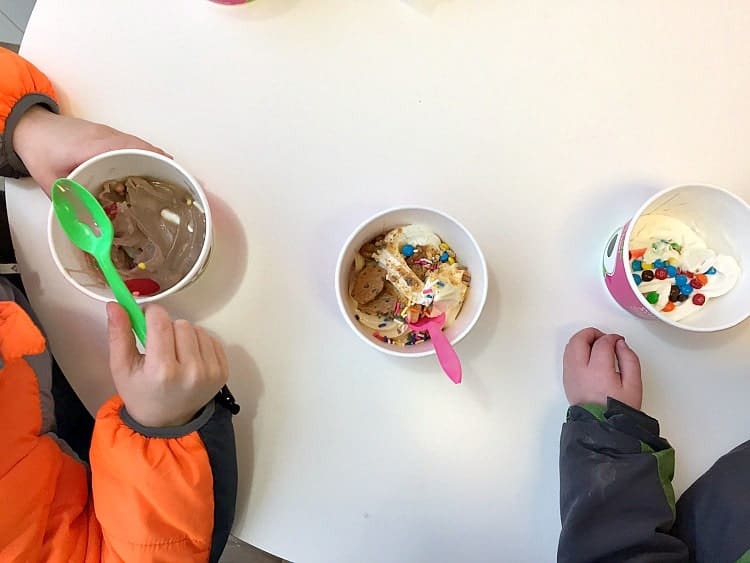 I don't usually feel like cooking on Friday evenings, so the norm is take-out pizza. This particular night, however, Spencer insisted on fish sticks from Whole Foods (which we haven't had in ages). I thought it sounded like a nice change, and it was easy finger food to enjoy while the kids had Movie Night on the floor of the living room. We rented the movie Trolls, which was really cute. In fact, it was the first movie EVER that all 3 of the boys watched from start to finish. They loved it! 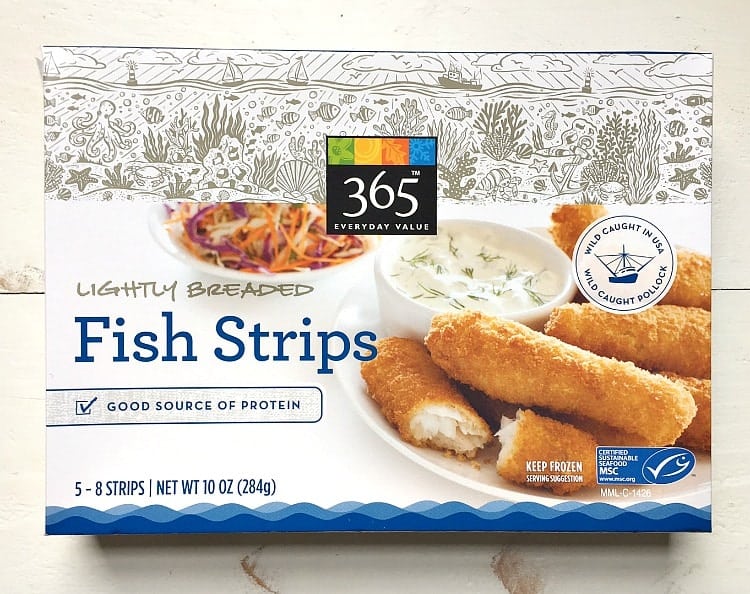 I served the fish with biscuits and honey, as well as carrots on the side. 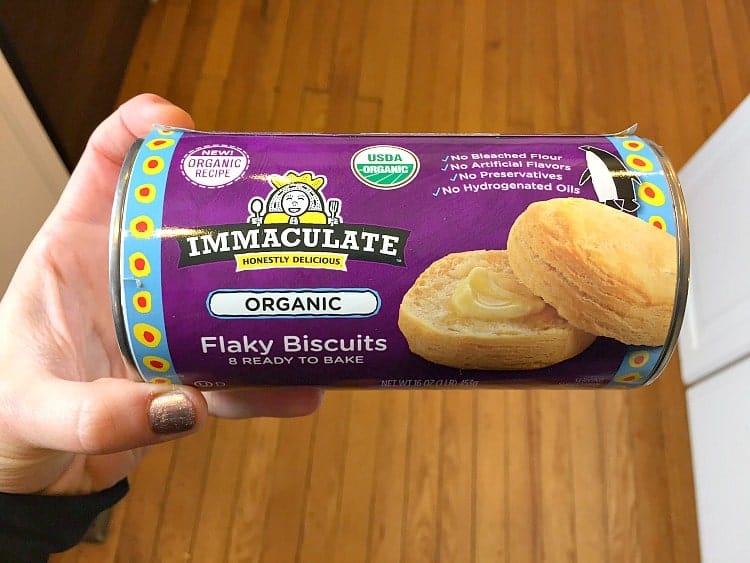 On Saturday I took Casey to his friend's Star Wars-themed birthday party, 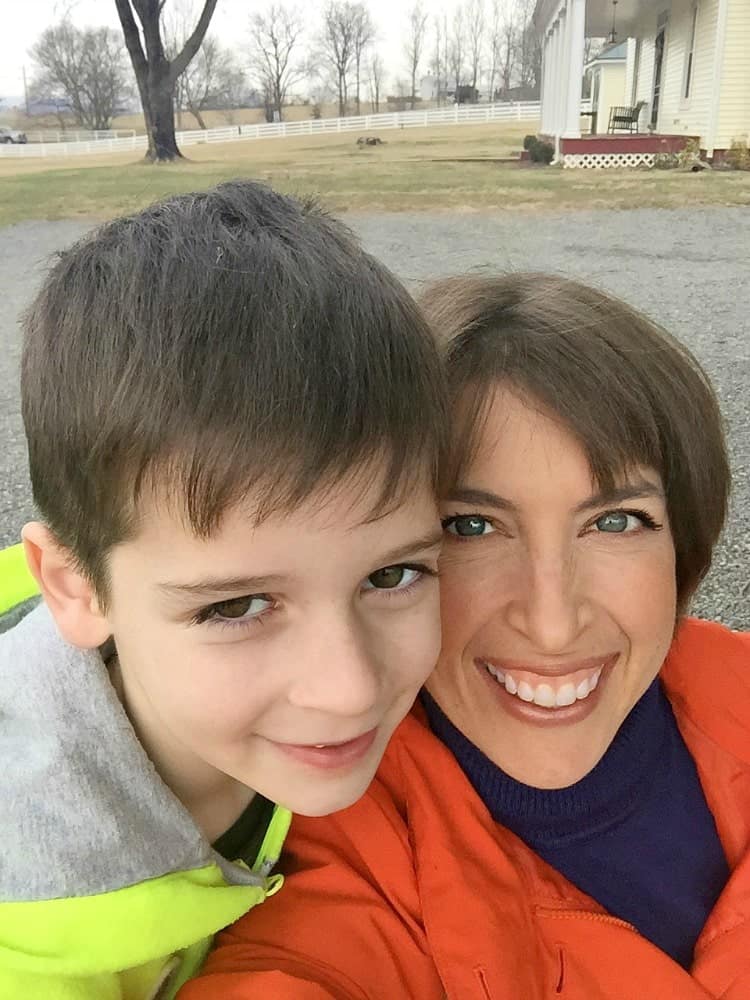 where he ran around outside with light sabers, jumped in a bouncy house, and ate a giant slice of cake. Obviously, he had a blast! 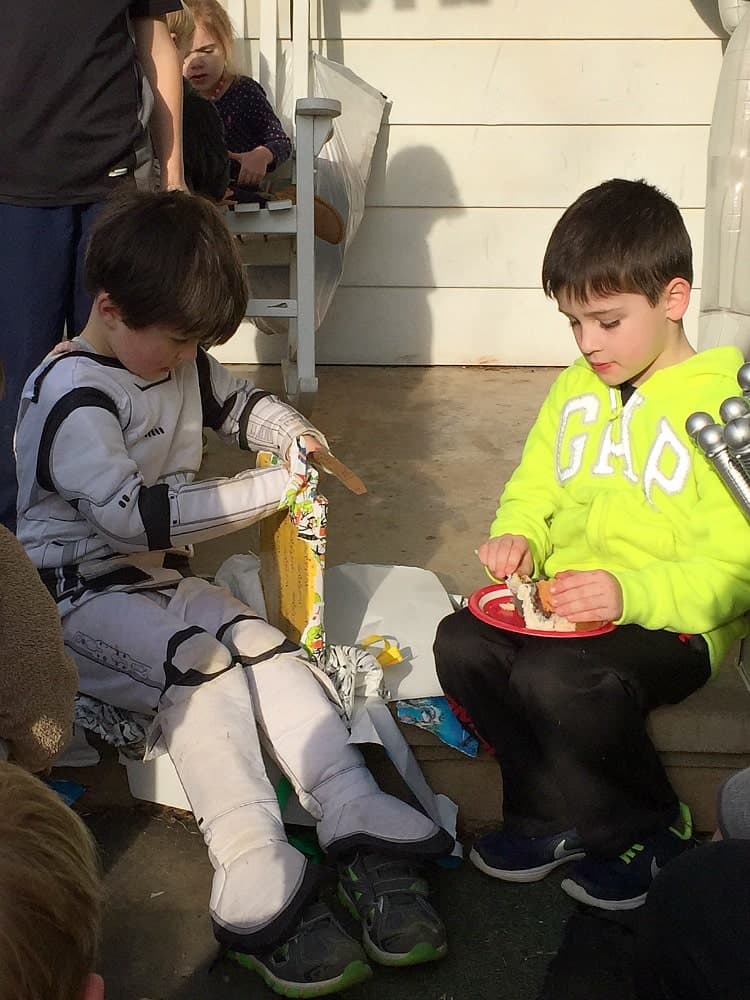 We pretended it was summer and served grilled sea bass and salmon for dinner. I made a salad with romaine, tomato, avocado, and a homemade honey balsamic vinaigrette dressing. Plus baguette! 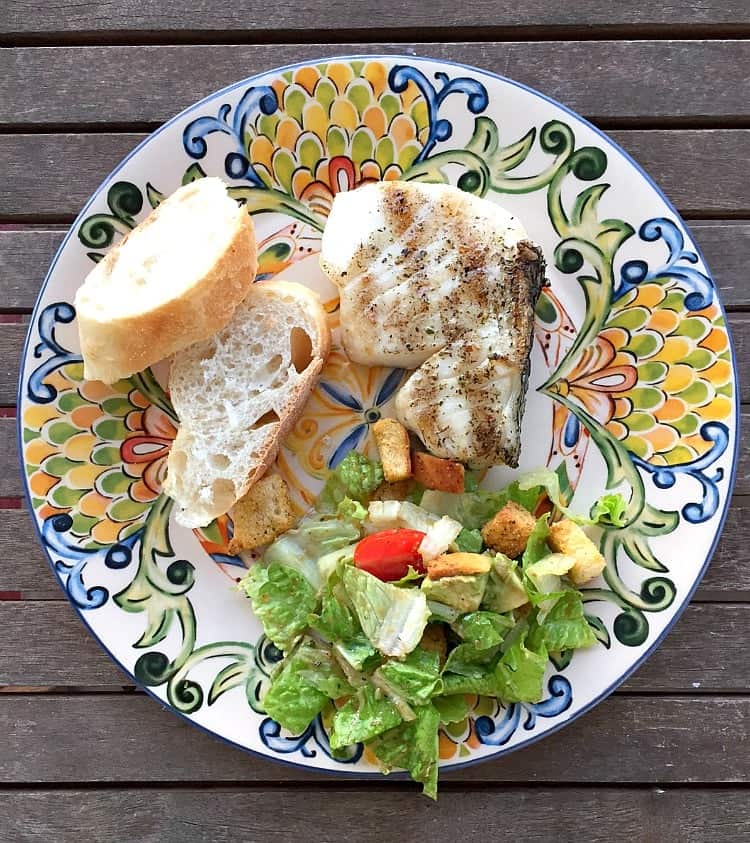 And that brings us to this morning! I have a fancy schmancy lunch planned with my girlfriends at a French restaurant in Gordonsville (baby shower!), and Keith will grill steaks and potatoes for supper. Enjoy the rest of the weekend, and be sure to check back here tomorrow for a tasty Mardi Gras dinner!