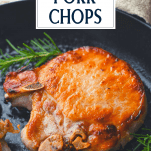 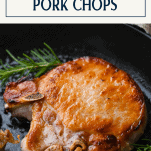 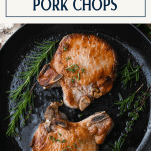 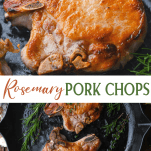 A simple pork chop brine with brown sugar, garlic and herbs is an easy way to create moist, tender and flavorful meat! Whether you fry them in a cast iron skillet, bake them in the oven, or throw them on the grill, these garlic rosemary pork chops are a delicious and easy dinner to enjoy all year round.

Brined pork chops are the key to the most succulent meat that you'll ever sink your teeth into! And you know what? It's so easy! Similar to marinating, you'll need to plan ahead and allow a couple of hours for your pork chops to sit in the brine, soak up all of the flavors from the herbs, garlic and seasoning, and become incredibly tender -- but that's all hands-off! The simple process really just requires your attention for about 10 minutes of prep. Then you can grill, fry, or bake the pork for an incredibly tasty dinner.

Should you brine pork chops?

Brining was a food preservation technique originally used in the days before refrigeration. In short, a brine is a bath of salty, flavorful liquid. The salt in the brine seasons the meat and changes the structure of its proteins, allowing them to absorb and hold on to more moisture. Brined pork chops are more tender and moist, and less chewy than non-brined pork.

Lean meats like pork and poultry benefit greatly from the brining process, which is why you often see turkeys brined before roasting on Thanksgiving. But don't wait until a holiday to brine your meat! Pork chops are also a great candidate for brining. No more dry pork chops!

A basic brine ratio is ¼ cup of kosher salt per 4 cups (1 quart) of water. Brines often include sugar, so the brown sugar is also a part of this simple brine. You can scale all of the ingredients to create more brine if you're planning to cook more meat. Just make sure to keep the ratio the same.

This is just a quick overview of the simple ingredients that you'll need for the best pork chop brine recipe. As always, specific measurements and step-by-step instructions are included in the printable recipe box at the bottom of the post.

How to Brine Pork Chops

This easy pork chop brine comes together in about 10 minutes, and the rest of the process is almost entirely hands-off. Similar to marinating, brining pork chops yields flavorful, tender meat. It's worth the extra step!

How long should you brine pork chops?

For best results, brine thick-cut, bone-in pork chops for 1-4 hours in the refrigerator. You can do a quick brine for as little as 30 minutes. Smaller pork chops or thinner, boneless pork chops do best in the brine for about 30 minutes - 2 hours. ​​​​​​

​​​​​​​While some recipes suggest that you can brine pork chops overnight, I do not recommend brining the meat for more than about 4 hours. If you leave the meat in a brine solution for too long, you may end up with overly-salty, mushy pork.​​​​​​​

You can cook the brined pork chops in a variety of ways. They work well on the grill, baked in the oven, or pan-fried in a cast iron skillet (as shown here).

For thick-cut, bone-in pork chops, fry in olive oil in a cast iron skillet for about 7-8 minutes per side. They should develop a really nice crust and color on both sides and reach an internal temperature of 145°F. Smaller pork chops will cook faster, so using an instant-read thermometer is the best way to know when your meat is done.

If you prefer to grill the brined pork chops, heat the grill to medium-high heat. Refer to the pork chop grill time chart below for specific grilling times based on your cut of meat:

Brown the chops in a skillet over high heat for about 2-3 minutes per side, then bake in a 400°F oven for 6-10 minutes (for thick-cut chops), or until they reach an internal temperature of 145°F.

What to Serve with Rosemary Pork Chops

These flavorful, juicy pork chops go well with just about any of your favorite sides. Here are a few ideas to get you started: 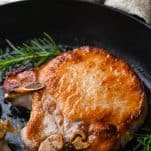 FOR THE PORK CHOPS:

For Grilling: If you prefer to grill the brined pork chops, heat the grill to medium-high heat. Refer to the pork chop grill time chart above for specific grilling times based on your cut of meat (about 20-30 minutes for bone-in thick-cut chops). For Baking: Brown the chops in a skillet over high heat for about 2-3 minutes per side, then bake in a 400°F oven for 6-10 minutes (for thick-cut chops), or until they reach an internal temperature of 145°F.