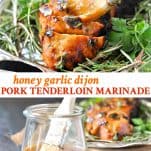 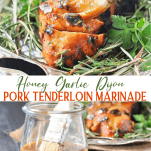 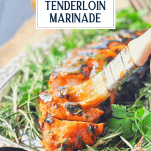 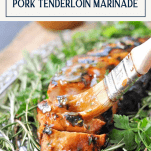 Pork tenderloin can get a bad rap as the dry, lean, tough alternative to chicken breasts. But that's so not fair! With a simple Honey Garlic Dijon Pork Tenderloin Marinade, this humble cut of meat is elevated to Super Star status! Best of all, the easy dinner only requires 10 minutes of prep before leaving it to marinate in the refrigerator. It's a healthy, make-ahead meal for any busy weeknight! 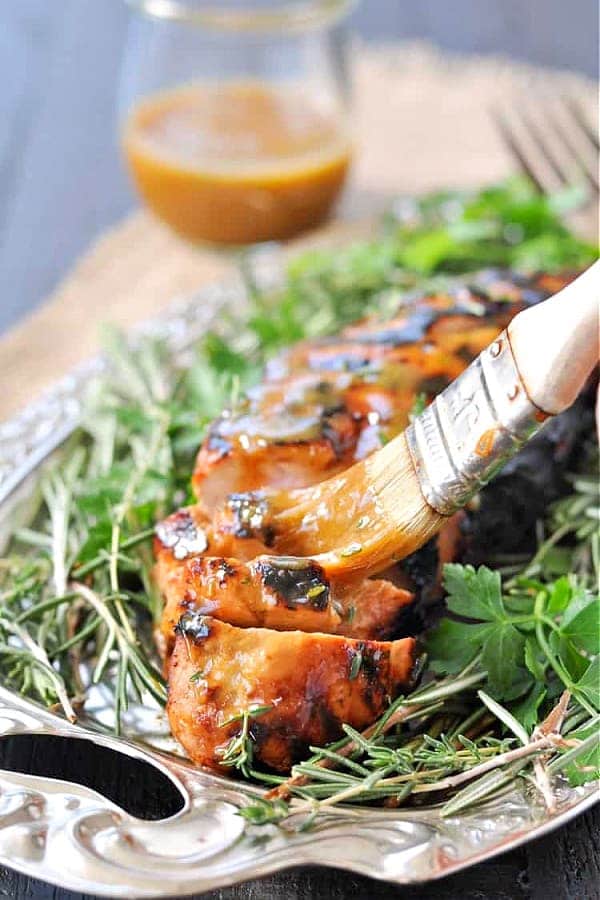 You can't beat the ease of a simple grilled pork tenderloin marinade, which comes together in about 5 minutes and creates the most flavorful, tender and juicy meat. Use the same easy marinade for oven-baked pork tenderloin, pork chops, or chicken, too!

The Difference Between Pork Tenderloin and Pork Loin

Pork tenderloin, a smaller cut that generally weighs about 1 pound, does not come from the same part of the animal as the larger pork loin. Since pork tenderloin is naturally lean and tender, it does well when cooked quickly at high temperatures. By contrast, pork loin lends itself well to slower roasting or grilling techniques. For more details about these two different cuts of meat, check out this article. Today, we're focused only on the pork tenderloin! This recipe calls for a single tenderloin; however, you can easily scale the ingredients (doubling or tripling the marinade) to cook more than one tenderloin at a time.

Here's a quick overview of the simple ingredients that you'll need for this easy marinade. As always, the specific measurements and complete cooking instructions are included in the printable recipe at the bottom of the post. 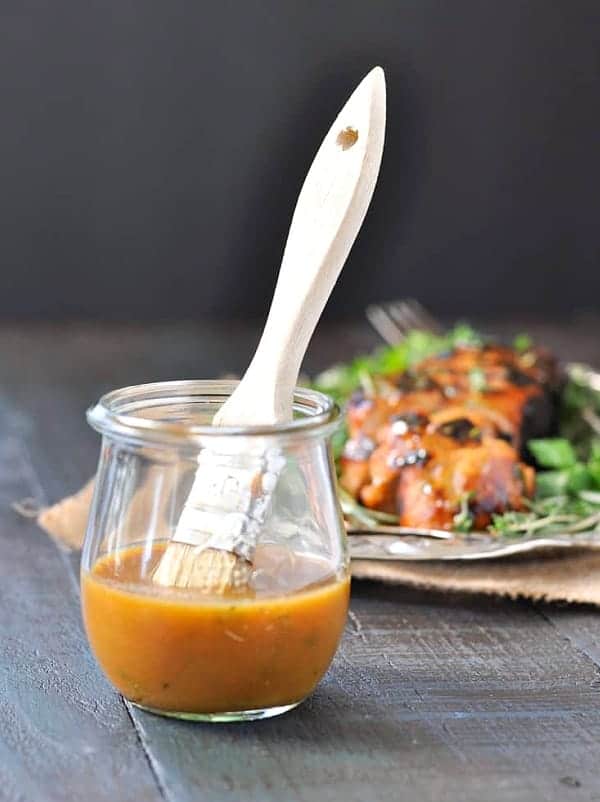 How to Make Pork Tenderloin Marinade

You can season a pork tenderloin with a spice rub, or give the meat plenty of flavor from a quick marinade. This recipe takes advantage of a sweet-and-savory marinade to tenderize the meat, add flavor, and help caramelize the outside (thanks to the honey). 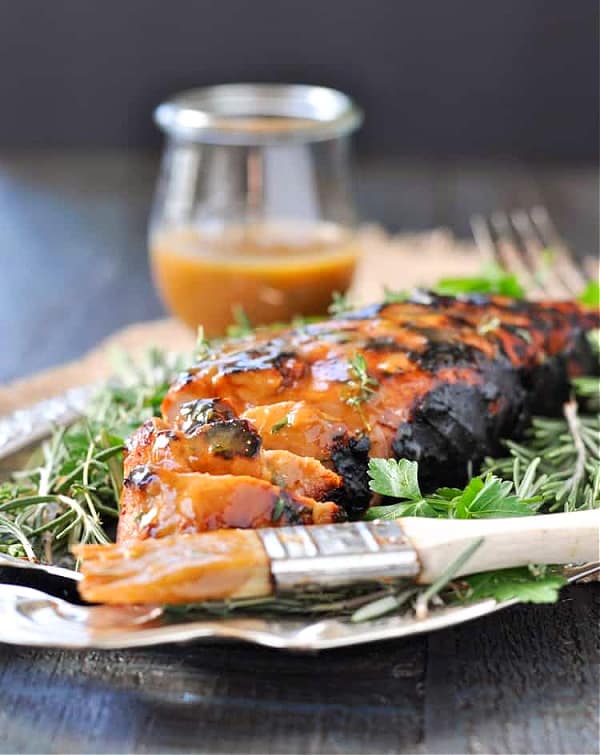 How Long To Marinate Pork Tenderloin

Marinate the pork for a minimum of 30 minutes to allow the flavors to soak into the meat, or up to 24 hours in the refrigerator. Yes, it's possible to marinate the tenderloin for too long, since the enzymes in the meat start to break down and the cooked pork can have a mushy texture. Ziploc bags are great for marinating because they don't take up much space in your fridge, but you can also use a regular covered dish.

Serve the pork tenderloin with any of these delicious sides: 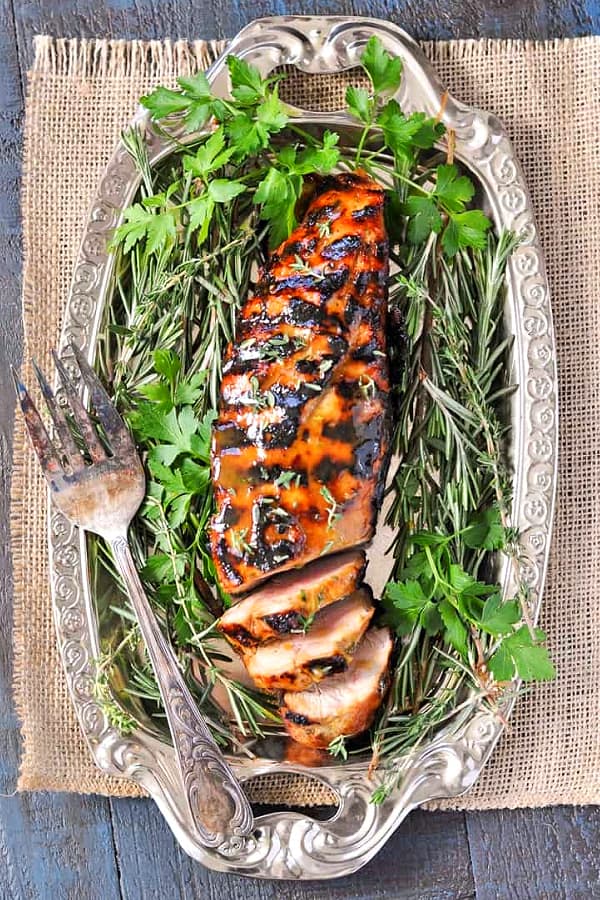 How to Make Pork Tenderloin Juicy

Not overcooking the meat is the key to preventing the pork tenderloin from drying out. Since this particular cut of meat is already very tender and lean, it does best when cooked quickly at a high temperature (by contrast, a tougher, fattier cut like a pork shoulder does best when cooked low and slow). If you grill or roast the tenderloin at a low temperature or for too long, you risk drying out the meat, resulting in a tougher, chewier texture. For a juicy pork tenderloin, you're looking for a medium finish (about 145° F).

Total cooking times will vary depending on the size, thickness and temperature of your pork. As a result, I always recommend using a thermometer to know when your meat is done. The tenderloin is ready to come off the grill or out of the oven when it reaches an internal temperature of 140-145° F. The temperature will continue to rise as it rests, and you want to make sure that you don’t overcook the meat (because it can become dry).

Anywhere between 140° F and 160° F is fine; however cooking it more towards medium (145° F) will produce juicier pork. Always rest the meat for at least 5 minutes before slicing and serving.

What color is cooked pork tenderloin?

According to the National Pork Board, it's perfectly safe to consume medium pork (that's cooked to about 145° F). At this stage, the pork will have a slight touch of pink in the center and will be at its juiciest! 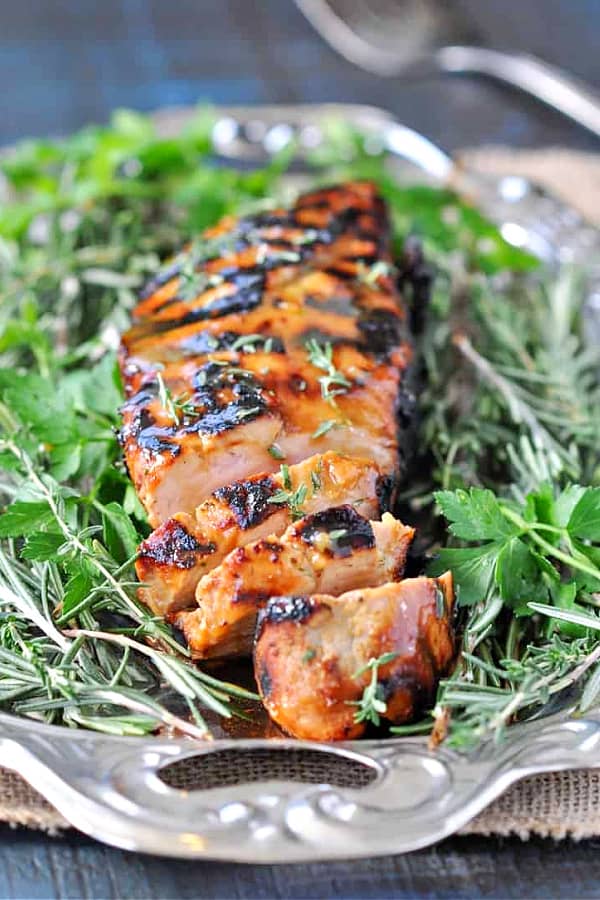 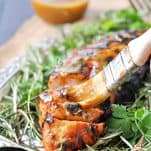 TO COOK THE TENDERLOIN IN THE OVEN:

TO COOK THE TENDERLOIN ON THE GRILL:

This recipe was originally published in March, 2017. The text was updated in February, 2021.