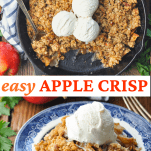 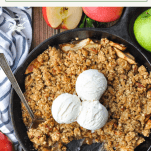 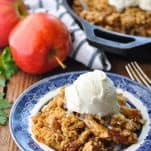 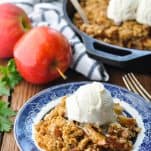 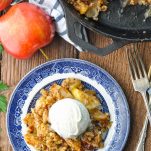 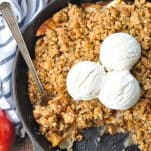 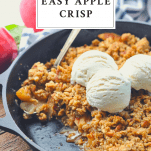 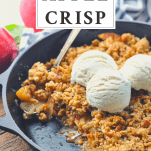 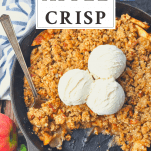 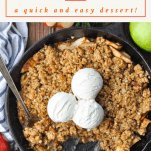 This Easy Apple Crisp recipe is the perfect way to enjoy a bounty of fresh fruit! Sweet and tart warmly spiced apples are topped with a buttery, crunchy oat streusel for a classic dessert that everyone loves. Bake the crisp in a skillet or in a dish, and serve warm with vanilla ice cream on top!

Truly — the best apple crisp recipe that you will ever taste! A fruit crisp is such a great dessert for beginning bakers because it’s almost impossible to mess up. So much easier than a pie — and ready for the oven in about 20 minutes!

An easy Apple Crisp is a simple, rustic dessert made from an apple base that's topped with a buttery oat streusel crumb topping. While there are endless versions of this classic dish, here are a few reasons to make this your go-to apple crisp recipe:

What is the difference between Apple Crisp and Apple Crumble? Or Apple Cobbler or Apple Pie?

There are plenty of old fashioned apple dessert recipes, so it’s easy to get confused! Crumbles and crisps are very similar, as they both include a fruit base with a streusel topping. Originally, an old fashioned apple crisp would contain oats in the topping, while a crumble would not. These days, the words “crumble” and “crisp” are often used interchangeably when referring to these desserts. A cobbler, by contrast, is a fruit dessert with a biscuit or cake-like topping (source). And don't forget about pie! The crisp's filling is similar to a pie filling; however, the crisp has a crumb topping (and no bottom crust), rather than a double pastry crust that you find on a pie.

How to Make Easy Apple Crisp from Scratch:

I honestly can’t think of a more perfect dessert for your next Sunday supper, holiday celebration or casual gathering with friends! This easy apple crisp is made from scratch, but it comes together quickly, can be prepped and baked ahead of time, and (most importantly) it tastes amazing! Your guests will be showering you with praise, and nobody will ever need to know that it only took you a few minutes to throw together. That’s my kind of baking!

What are the best apples for Apple Crisp?

I prefer baking with apples that have a firm flesh and don’t break down into apple sauce when cooked. Try a combination of Granny Smith apples (for tartness) and a sweeter firm-fleshed apple (like Gala, Honey Crisp or Pink Lady). Other great options include Jonagold, Winesap and Braeburn apples. You can't beat the mix of sweet-and-tart in an apple dessert.

Since Honey Crisp apple season typically begins in late August/early September, you should be able to scoop up a few at a good price very soon to use in this dessert. Get them while they're fresh and affordable!

Transfer this mixture to your skillet or baking dish.

In a separate bowl, stir together the oats, melted butter, pecans, brown sugar, flour and salt.

Sprinkle the topping over the apples.

Bake the crisp until the filling is hot and bubbly and the topping is golden brown. Your kitchen will smell amazing!

How to serve Easy Apple Crisp:

Apple crisp can be served at room temperature, but it's always best when it's warm from the oven. Top each serving with a scoop of vanilla ice cream or a dollop of whipped cream for the best apple dessert recipe ever! 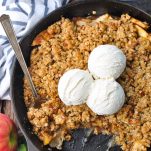