It’s Hanukkah “season,” and I am the first to admit that I am no expert in this area. Instead of fumbling my way through a kugel recipe, I called upon my dear friend Caryn, who knows much more about the Jewish faith and traditions than I ever will. She prepared the following guest post for us, and I know that by the time you’re done reading, you will love her as much as I do.

But FIRST, I just have to share a few pictures of me and Caryn that date back to, oh, about the late 80’s and early 90’s. She’ll probably kill me for posting these, but we all need a good laugh sometimes. No shame here! 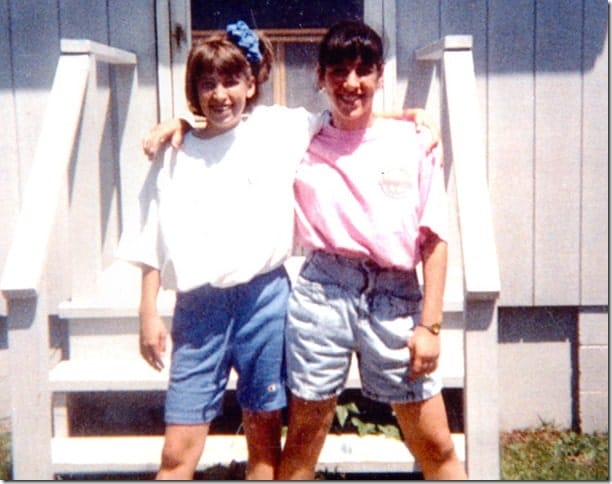 That’s me on the left and Caryn on the right. Camp in the sixth grade, I believe? 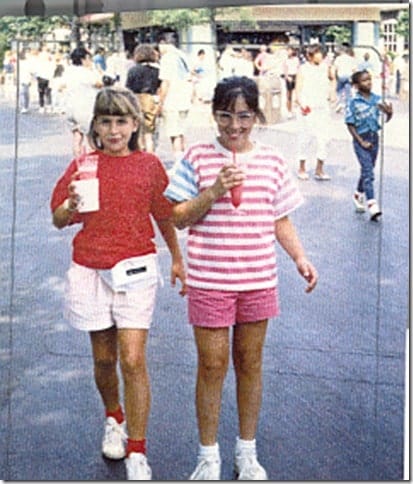 At King’s Dominion in the 4th or 5th grade. Like my fanny pack? 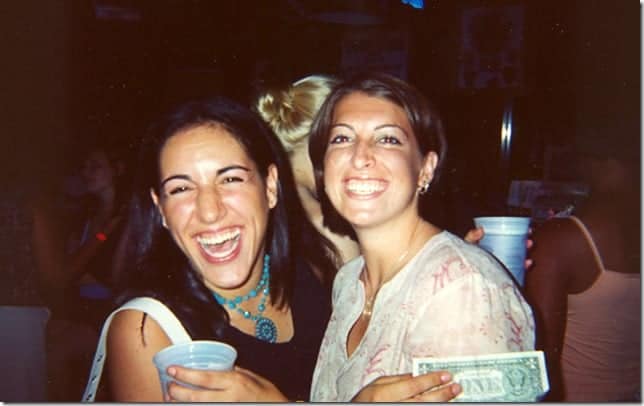 At a party, with a few drinks, post-college.

And now that I’ve sufficiently embarrassed us both, I’ll let you move on to Caryn’s actual post. Enjoy!

Hello!! First, thank you Blair for letting me guest blog! I'm Caryn and have known Blair for over 25 years.

Blair and I grew up a block apart, our houses being separated by a creek. We'd walk to each other's homes, dress up our dogs, and then grew up to playing sports, and carpooling to school together. I was Blair's token Jewish friend going up. (Actually, I was many people's token Jewish friend growing up in Virginia.)  Later on, I was responsible for setting up Blair and Keith. We were in each other's weddings as maid/matrons of honors and now we are both moms to boys (Mine are 2.5 and 6 months).

Now, we could not live more opposite lifestyles.

Blair lives next to a farm and I live in the middle of Manhattan.

Blair's children regularly see tractors and cows while mine can identify the Empire State Building vs. the Chrysler Building.

Blair's children go to tractor pulls, mine know how to hail a taxi.

I could go on. You get the idea. 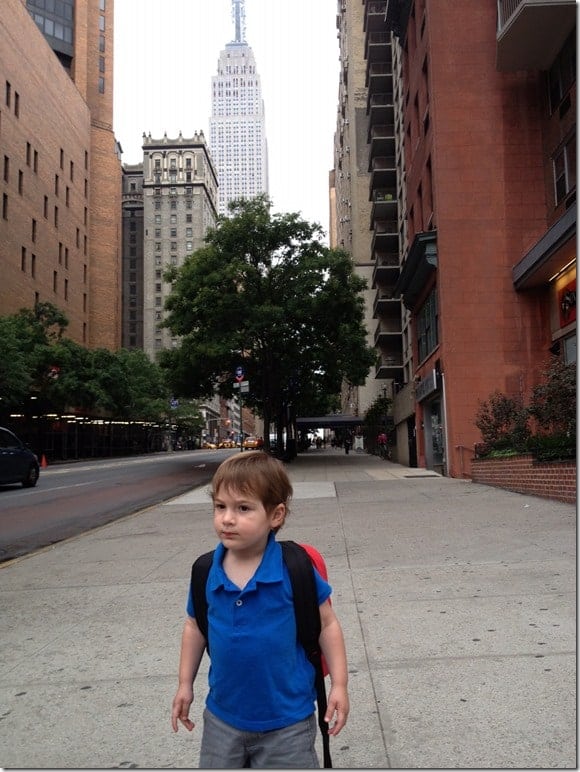 Reid on his first day of preschool in front of our "backyard", the Empire State Building. 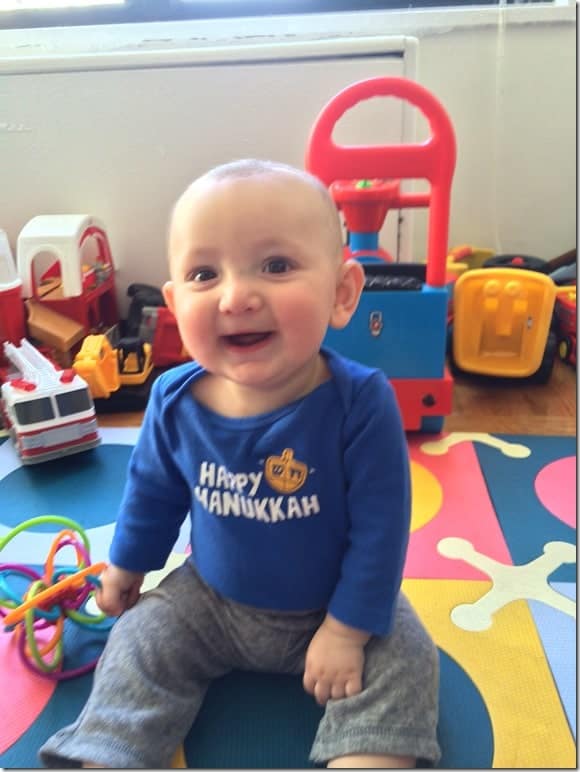 Max getting geared up for his first menorah lighting

First the obvious. Everyone is eating turkey and I'm writing about Hanukkah. It's odd but it's nice to be with extended family during this time.

As with most Jewish holidays, the synopsis is, "they tried to kill us, we survived, let's eat!". I could go into the story, but feel free to read it here. Basically a menorah, candelabra, only had enough oil to burn for one night and it ended up burning for 8 days! A miracle! SOO. All of our food items on Hanukkah have lots of oil. Lots of Jewish holiday food also has plenty of eggs but there's no correlation to anything there.

I'd also like to point out (I hear my father speaking here) it's actually a minor holiday on the Jewish calendar but since it falls near Christmas, (uh, usually) it has morphed into 8 NIGHTS!! of presents!! 8 NIGHTS! Take that Santa. Come on, I didn't have Santa or the Easter Bunny. Give me this. This and the Tooth Fairy. That was my childhood.

The traditional Hanukkah meal is latkes, or potato pancakes. As someone once told me, "Oooh, these are better than McDonald's hash browns!" ... Oy...

So Blair, this is not one of your "prepare while the children nap" meal. Unless you can ensure they're asleep for a good 3 hours straight. I'm sure you could take some shortcuts (i.e.- not peel the potatoes) but part of the fun is the kvetching. It's well worth it. I promise.

Before we begin some general comments. There are many, many different varieties of latkes and many people with opinions on how to make them. These are mine (and my mother's).

Oil. Use vegetable, canola oil, or peanut oil. You'll probably want about a half an inch covering the pan. It's okay. Better to err on the side of more oil than less. Too little oil, they'll stick to the pan and you won't be able to flip them. If the oil isn't hot enough, same thing, they can fall apart. And now your latkes will also absorb the oil and no one wants that. Mom recommends putting a drop of water in the oil to make sure it bubbles and is hot enough.

Fry vs. Baking them. I can't believe I even just typed this. But yes, people think of baking them. I mean, I guess you could. But they're a once a year (okay maybe 3x) food. Man up. Fry them.

Smell. Your house may, okay, will smell like latkes. I asked my husband how I could describe that for everyone and he said, just tell them it'll smell like French fries. Open a window and embrace it.

Types of potatoes:  We do the 5lb bag of russet potatoes. I know some folks have gotten modernized them with sweet potatoes and even much fancier with duck confit and truffles. (Oh, Brooklyn...) I'm sure they're all good but classic is the way we go.

RAW 100%. Do not cook your potatoes beforehand. Mom said they're awful if you cook them first. Actually she said, "Don't even write about cooked potatoes. Don't give people any ideas! It's not an option!"

Make that day or the night before: Usually we've made ours within 2 hours of eating. Urban legend says if you fry and freeze them, they'll typically get soggy. But I'm wavering on this one. With a baby and toddler under foot, we're making them the night before. The tip is to let them cool on a single layer of paper towels to soak up the oil and then freeze. And then bake at 450 for 15-20 minutes before serving. I hear they're supposed to taste just the same!

Pans: like any frying, use good pans. Please. I've learned from experience at a Hanukkah party I once threw. Let's just say a good friend had to call 911. And another friend had to come over and fry the batter at her house. So yes. Oil. Take your precautions. And have good friends as a backup.

Paper towels: Stock up. It's just like making bacon.

Sour cream or Applesauce: You use these typical condiments to put on your latkes. I enjoy both on my latkes, however, if you're serving your latkes with meat (i.e. brisket), most  Jews shy away from sour cream since it goes against mixing the milk/meat kosher thing.

Food processor: Latkes are why you register for a food processor. Potatoes- either with the grater attachment or if you're blending them, do it here. Take out your potatoes and do the onions as well. If you don't use a food processor (or something similar), you're just mashugana.

at least 2 tablespoons of salt

Peel and shred potatoes. We use the grating disc of the food processor.

Wrap shredded potatoes in a cheesecloth or paper towel and start draining the excess water out. Squeeze all until dry.

Combine with the shredded onions

Mix in eggs one at a time, alternating with ¼ cup of matzo meal, until mix can be formed into patties

Consistency should be like an oatmeal, not watery. Add more matzo meal if it is too watery.

Flip once or twice 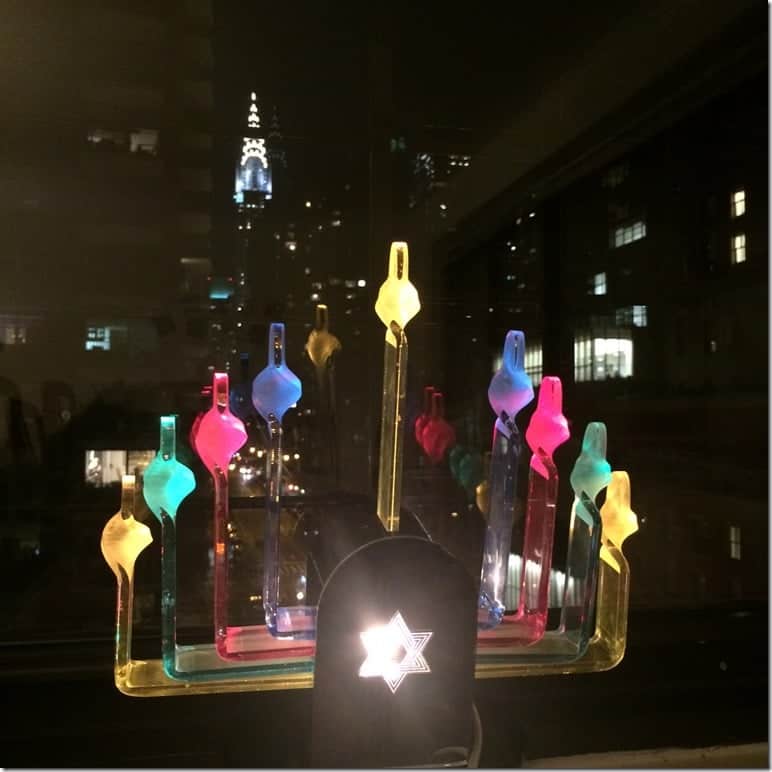