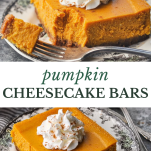 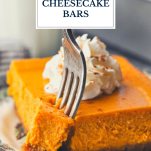 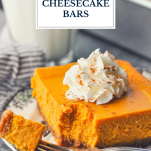 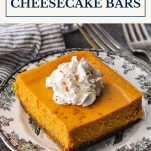 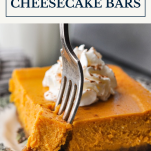 A thick layer of rich, creamy, spiced pumpkin cheesecake sits on top of a gingersnap graham cracker crust for the most decadent and delicious fall dessert. Bake these easy pumpkin cheesecake bars in a 13 x 9 pan for a festive treat that feeds a crowd (they're also freezer-friendly). Don't forget the whipped cream on top!

What could be more perfect for an autumn birthday, a Halloween party, or a Thanksgiving dessert buffet?! This Pumpkin Bars recipe with a graham cracker crust comes together easily with a just a few simple ingredients. The treats are festive, they're tasty, and they can be made in advance to avoid any last-minute stress. It's truly the perfect pumpkin cheesecake!

I wanted the bars to have a warmly-spiced gingersnap crust; however, I have found that using gingersnap cookies in a crust can sometimes yield a crust that is so hard you can barely slice into it. Instead, this recipe has a classic graham cracker crust that's reminiscent of a more traditional cheesecake, but the graham cracker crust is seasoned with cinnamon and ginger to achieve that cozy, fall-inspired gingersnap flavor. It's the best of both worlds!

This is just a quick overview of the ingredients that you'll need for a pan of the ultimate pumpkin cheesecake bars. As always, specific measurements and step-by-step instructions are included in the printable recipe box at the bottom of the post.

How to Make Pumpkin Cheesecake Bars

These bars are like a beautiful cross between pumpkin cheesecake and pumpkin pie -- in bar form. There are no fancy layers or swirls to mess with, no caramel drizzle, and no streusel topping. Just a classic pie filling poured on top of a spiced graham cracker crust. I love to garnish each individual slice with whipped cream and a dusting of cinnamon, but that's totally optional. They're easy, delicious, and perfect for the season!

This is a simple and convenient make-ahead dessert! The cheesecake bars need to be refrigerated, so store them in an airtight container in the refrigerator for up to 3 days. Add the whipped cream on top just before serving.

Yes, you can even freeze these pumpkin dessert bars! Slice the cooled cheesecake into bars and store in an airtight container in the freezer for up to 2 months. Thaw in the refrigerator -- not at room temperature.

More Desserts You Can Make With Pumpkin Puree 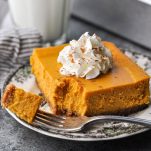 Once cool, slice into bars and store in an airtight container in the refrigerator for up to 3 days. Add the whipped cream on top just before serving. You can also freeze the bars for up to 2 months.