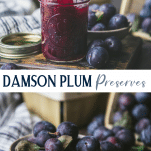 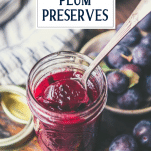 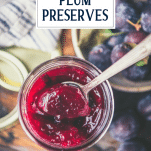 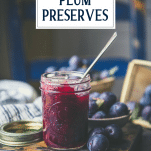 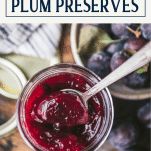 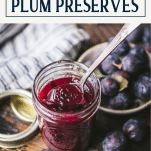 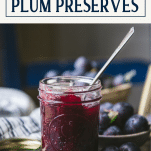 Sweet and a little bit tart, these old-fashioned Damson Plum Preserves require just 3 ingredients — and no pectin! Remove the pits, simmer a pot on the stove, and you’ll have a couple jars of beautiful, preserved fresh plums to enjoy with cheese on your next charcuterie board, to spread on biscuits, cornbread or toast, to elevate sandwiches, or to use in baked goods like a classic Damson Plum Pie.

Damson plums are small stone fruits that typically ripen here in Virginia from August to early September. They look like the black plums that are readily available in grocery stores, but they’re much smaller — about the size of a very large seeded grape! The fruit has existed unaltered for thousands of years, and gets its name from Damascus (likely where it originated). The fruit was eventually taken to Italy, then spread to the rest of Europe and parts of North America, where it now grows wild and in home orchards. If you’re lucky enough to get your hands on a quart or two of these beautiful purple gems, a pot of Damson plum preserves is a must!

Damson plums have a strong, tart flavor, making them ideal for preserves, jam, cooking and baking.

Can you eat damson plums straight from the tree?

Yes, you can eat the fruit raw, straight from the tree — but you might not want to. Damson plums have a more pungent, sour flavor than other plums. Most folks prefer to bake with Damsons or to make jam, jelly or preserves.

The Difference between a Damson and a Plum

There are a few differences between damsons and other types of plums. First, the taste — as mentioned above, damsons have a stronger, more tart flavor than other plums. Damsons are also significantly smaller than a standard red or black plum, and have an oblong-oval shape, rather than the rounder shape of a regular plum. Finally, larger plums have a pronounced, grooved longitudinal seam, whereas the same seam on damsons is much more difficult to see.

This is an overview of the ingredients that you’ll need for an old fashioned damson preserves recipe without pectin. As always, specific measurements and complete cooking instructions are included in the printable recipe box at the bottom of the post.

How to Sterilize Jars and Lids for Jam or Preserves

It’s a good practice to sterilize the jars and lids before canning in order to kill any bacteria, fungi or yeast. There are a variety of ways to sterilize the jars (here’s a helpful article with different options). I typically use the dishwasher, or just boil them for 10 minutes in the same big pot of water that I’ll use for processing.

How to Make Damson Plum Preserves

This old-fashioned recipe comes from my friend Mollie, whose great grandmother used damsons to make preserves each year. The damson preserves were then enjoyed in this vintage damson pie, which I also highly recommend!

Once the sterilized jars are full and sealed, set the hot jars on a rack in a canner or in a large pot of boiling water. Make sure that the pot is deep enough so that the jars are covered by at least 1-2 inches of boiling water. Boil for 10 minutes (or 15 minutes if your altitude is above 6,000 feet).

How long does it take for Damson preserves to set?

Once the jars are filled and processed in the hot water bath for 10 minutes, place the jars on a dish towel on the counter. The jam will not set immediately, so it’s important to allow the jars to rest without interruption at room temperature until cool (or overnight), about 12 hours. Don’t forget that the preserves will continue to thicken as they cool and set.

Once the jam has had a chance to cool, you can check the seals on your jars. The lids should be down in the center or stay down when pressed. Unsealed jars should be refrigerated and used within 3 weeks. Properly sealed and processed jars of damson preserves should be stored in a cool, dark, dry place (such as a pantry) for up to 8 months.

If you choose not to process your jars of preserves in a hot water bath, they need to be stored in the refrigerator. These jars will stay fresh for up to 3 weeks. To freeze unprocessed jars of preserves, be sure to leave about 1-inch of headspace at the top of each jar to allow for expansion.

How to Use Damson Plum Preserves

This versatile spread is delicious in a variety of dishes. Try serving the preserves: 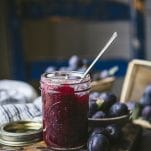 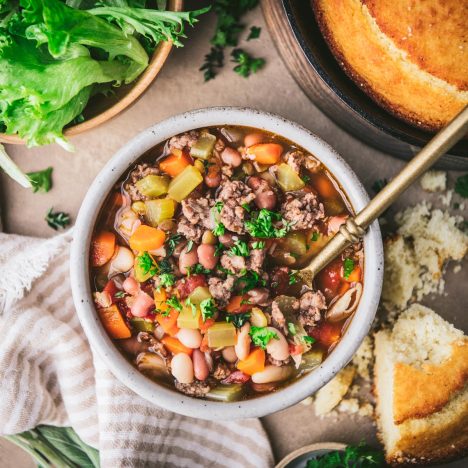 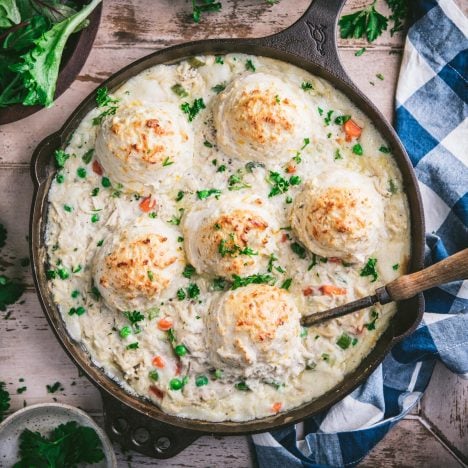 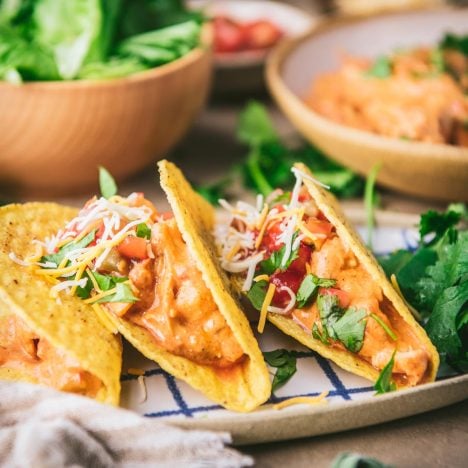 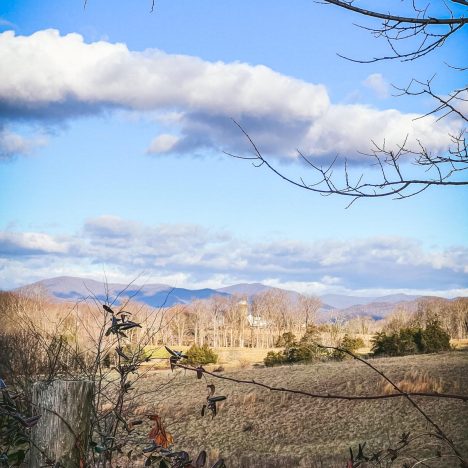 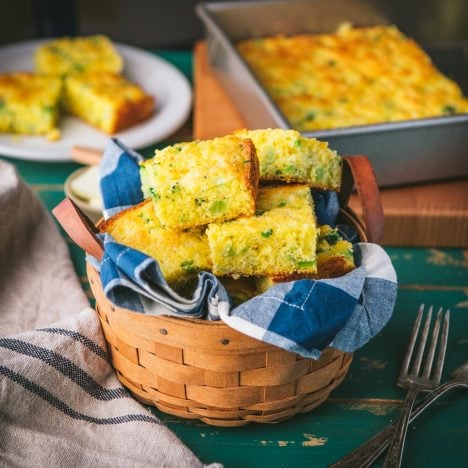