Good morning, and happy Sunday! What a week we’ve had! From snow days to (very) sick days, I’m sharing all of the highlights (and low lights) — along with our easy dinners — in today’s roundup of Our Week in Meals!

We woke up on Sunday morning to a countryside that was covered in a blanket of snow.

We had a quiet morning inside, I made a batch of Lentil Soup in my Instant Pot (which made the house smell cozy), and when the dog and I got stir-crazy before lunch, we headed out in the cold for a short walk.

PS — you can also make that soup in a slow cooker or on the stovetop!

I’m happy to report that I’ve finally found a pair of waterproof snow boots that actually keep my feet warm and dry! If you’re in the market for a new pair, I highly recommend these Sorel “Joan of Arctic” tall boots!

Keith dug out our vehicles so that we could take him to the airport in Charlottesville for a business trip; however, about an hour later he called back to say that his flight wouldn’t be leaving (due to the weather), so we drove back to Charlottesville to pick him up. We had Dad home for an extra night!

We stayed close to the fire, watched football, and I finished my latest book: Bear Town. This was an incredibly well-written novel, but it was definitely intense. A far cry from my last read (Crazy Rich Asians), but I got sucked into the book and wanted to see how it would end.

For dinner I served “Fish n’ Chips,” which included Southern Fried Catfish, frozen Alexia French fries, and coleslaw that I made with a kit. Easy and delicious!

Monday was a snow day!

We left the house bright and early to get Keith to the airport in Charlottesville, so after an hour in the car I treated the kids to Dunkin Donuts mid-morning.

Gibbs let me have some of his “Caramel and Chocoholic” donut, which basically tasted like an amazing dessert! Casey always goes for the jelly-filled donut, while Spence sticks to chocolate frosted with sprinkles.

As soon as we got back to the house, I dressed the kids in their snow gear and took them sledding on a great big (icy) hill near the school.

They had so much fun…until Casey was crying because his feet were too cold.????

We spent the rest of our afternoon at our friends’ farm, where the kids played and the moms chatted. Perfect way to pass a cold, snowy afternoon.

I made a cozy Dump-and-Bake Chicken Noodle Casserole for supper, which is basically like the classic soup baked in a dish (with more pasta, which makes my kids happy)!

Tuesday was another snow day off from school for the kids, but it wasn’t a very fun one around here.

Poor Casey woke up with a high fever and a cough that morning, so I dragged everyone to the doctor to have him checked out. Turns out he tested positive for the flu!

It came on so fast, and the poor child felt SO awful!

What else do we do when we’re stuck indoors with a counter full of overripe bananas? Make a loaf of my favorite One Bowl Whole Wheat Banana Bread! I was raised on my mom’s banana bread, so this is total comfort food in our house…

Shout out to my friend Mollie, who was kind enough to drive 30 minutes into town to pick up a Tamiflu prescription for us when Casey was too sick to get out of bed.????

Dinner that night was another great winter meal: the Lentil Soup that I had prepared on Sunday,

along with Roast Beef and Cheese Crescent Rolls. So tasty and satisfying!

I don’t have much to report from Wednesday — the snow started to melt and Gibbs and Spencer returned to school. My day was spent at home nursing a sick Casey, so it was definitely a quiet one.

Clearly he was feeling better that afternoon, since he joined me for a short dog walk up the street…and decided that he wanted to run sprints. Seriously, only Casey goes running on Day 2 of the flu!????

Casey thought that buttered noodles with Parmesan sounded good, so that’s what the boys had for dinner! Not fancy, but definitely a kid favorite around here. I just enjoyed some leftover soup from the night before with a few cheese and crackers on the side.

My parents stopped by that evening to drop off some treats for the kids (Legos are great sick day entertainment!), as well as this Pineapple and Cranberry Upside Down Cake for me. You can guess what I had for dessert…SO GOOD!

I felt like my week was an endless cycle of doctor’s appointments, trips to the pharmacy, cajoling kids to take gross-tasting medicine, cleaning up vomit, sanitizing and changing linens and clothes, and then repeat. Unfortunately, Thursday was no exception!

Spence woke up with a high fever that morning, and later tested positive for the flu as well.

I’m not going to lie: by the time I was on my 6th load of laundry that day and every inch of my house smelled like throw up, I was kind of falling apart. I have many strengths, but I don’t think nursing is one of them!????

I made a simple sheet pan dinner that night, which Gibbs and I enjoyed — the other two kids had zero appetite. This was Garlic Parmesan Chicken and Broccoli, plus crescent rolls on the side.

We woke up to another dusting of snow on Friday morning! Is this Virginia or New England?!

Fortunately, Keith made it home late Thursday night, because both Gibbs and I came down with the flu on Friday. Back to the doctor…

and back to the pharmacy for Tamiflu for the third (or fourth?) time this week!????

I picked up an online grocery order (so that none of us had to actually step foot in the store), and then immediately came home to start a pot of homemade chicken stock. The cure to every illness!

I used the stock to make our dinner that night: Chicken Noodle Soup and a side of saltines. Just like my mama taught me!

Between Gibbs’s coughing, vomiting, and medicine-dosing, sleep was hard to come by on Friday night — so our Saturday was VERY slow around here.

Fortunately, Casey and Spencer were feeling much better since their fevers broke on Thursday. I suppose that the flu shot + the Tamiflu helped to shorten the severity and the duration of our illnesses, so I’ll choose to focus on that positive!

While Gibbs and I rested at home, Keith took Spencer and Casey out to run errands. They grabbed lunch at Vinny’s, where the boys ate all of the pizza and chicken fingers that their little bodies could devour. Clearly they were back to normal!

I assembled and baked my Tuna Melt Sliders for dinner that night, which I served with chips and salad. Then I parked it on the couch and sat by the fire for the rest of the evening!

This morning I’m feeling basically like my healthy self again (thank goodness), and I’m hopeful that Gibbs is on the mend, too. Looking forward to a regular, uneventful week ahead!????

Welcome to my farmhouse kitchen, tucked away at the base of Virginia's Blue Ridge Mountains. Inspired by local traditions and seasonal fare, you'll find plenty of easy, comforting recipes that bring your family together around the table. It's down-home, country-style cooking! 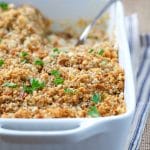