Hi there, friends! How has your week been going?! For any of my email subscribers who had trouble receiving emails last week, I apologize. We've been updating/revamping some tech stuff behind the scenes recently and we've had a few hiccups along the way (of course). Thanks for your patience -- all should be good to go now!

In the usual Sunday fashion, it's time for another Weekend Recap where I share the pictures that I have captured on my phone from the past few days. Ready, set, GO...

So remember my Spring Fashion Picks post? Well I got the urge to buy a new outfit in anticipation of a few upcoming events, so on Monday afternoon I bribed these two with a quick (and I mean QUICK) stop at the mall. They got to ride the merry-go-round and I got to run into the Gap, which happens to be right next to the horses. It didn't hurt that the store was having a 40% off sale, either! I initially went looking for a dress, but (not surprisingly) I came home with pants! More often than not, I'll wear pants over a dress...and this was no exception. 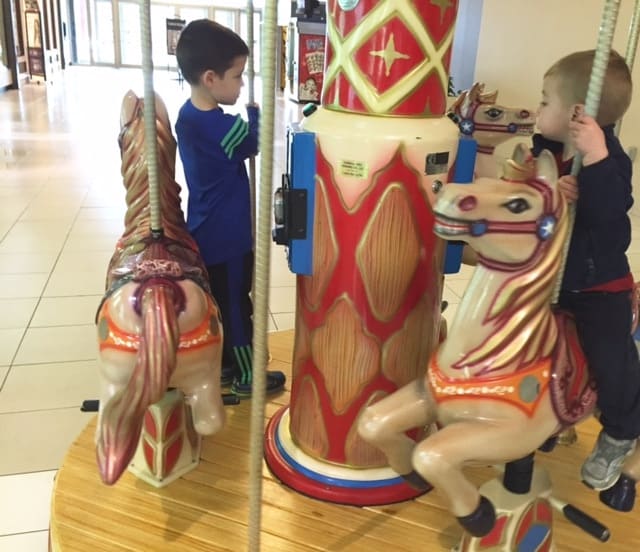 After a fast dash through the store I came home with these white Best Girlfriend Jeans, 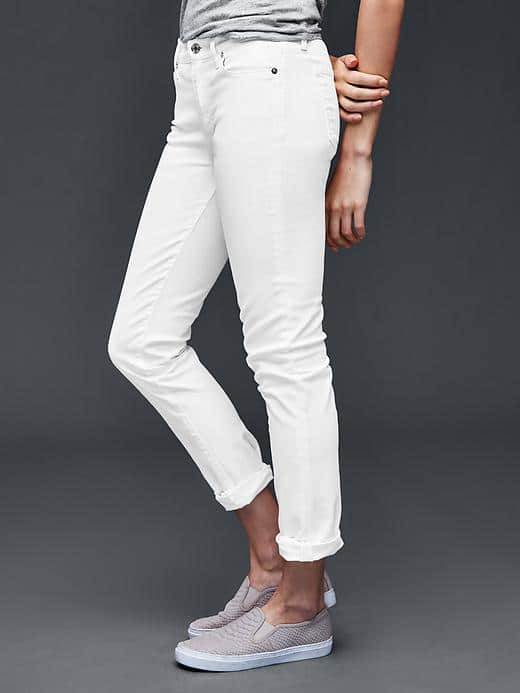 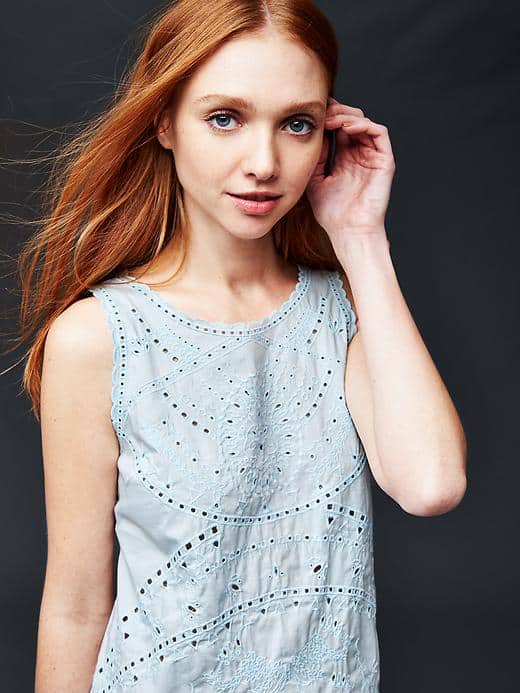 and this cardigan to wear over it since I'm always cold! The blue cardigan is actually the same color as the tank...not sure why they look so different in these photos! With some silver or gold sandals or flats (depending on the weather) and some fun jewelry, I figure it's an outfit that I can dress up or down and get plenty of wear out of each of the individual pieces throughout the spring and summer... 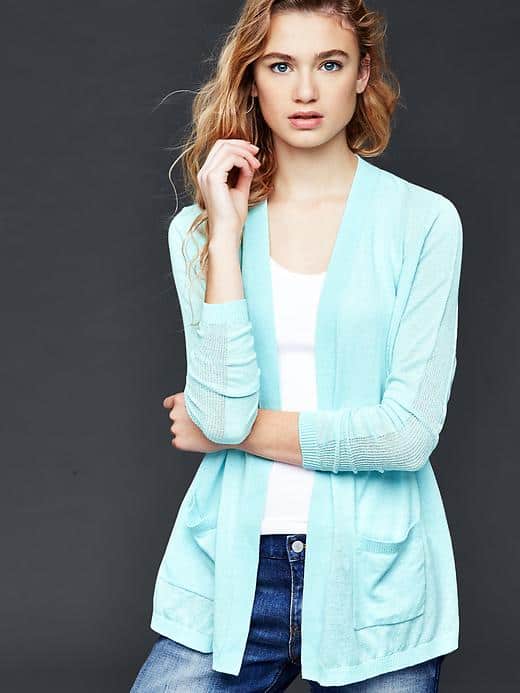 Dinner that night was a Barbecue Chicken and Cheese Grits casserole, which I prepped (in about 15 minutes) on Sunday, so that I just had to put it in the oven to bake it on Monday night. Recipe is coming soon!

I had a TON of asparagus that I got at Costco last week, so I sauteed that with some mini bell peppers and sliced onion. We had the veggies on the side, 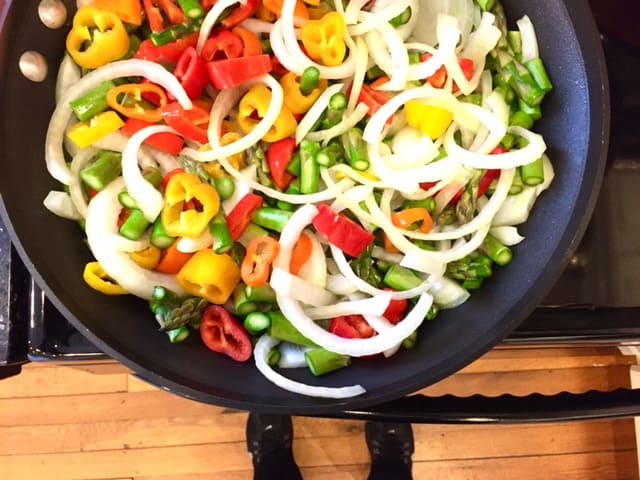 along with some dinner rolls from the freezer (these are the same rolls that I used for THIS Chicken Parmesan Sliders Casserole, but they're also really good on their own)! 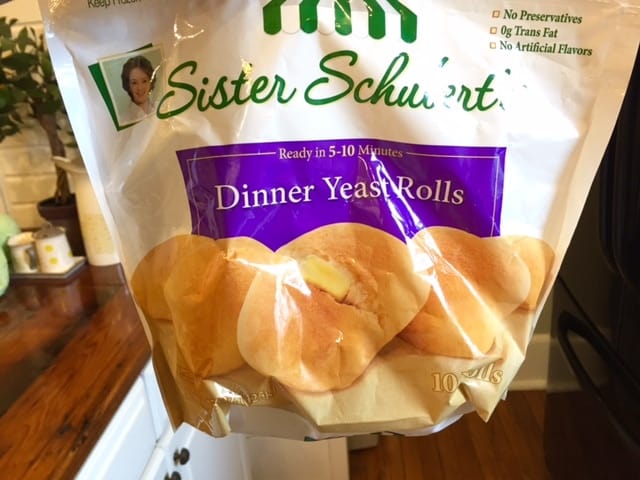 Did you guys stay up late on Monday night watching the finale of The Bachelor?! Keith and I were sucked in! I was rooting for JoJo, but I guess the ultimate decision isn't up to me! ?

On Tuesday morning I was feeling the effects of my short night of sleep...thank goodness for an extra cup of my current favorite coffee flavor! Have you tried this Golden French Toast? I love it! It has just a hint of maple and after I brew a cup my kitchen smells so cozy -- like it's Sunday morning brunch after I whipped up a batch of French Toast (or pancakes!). I wish... 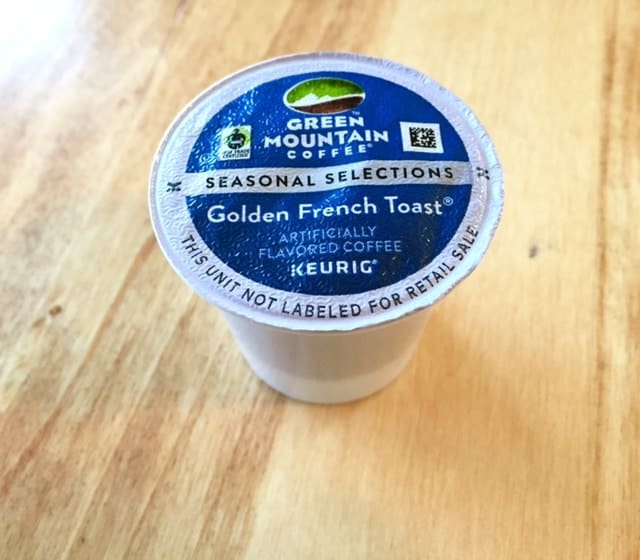 Keith's mom came to visit for the day on Tuesday, 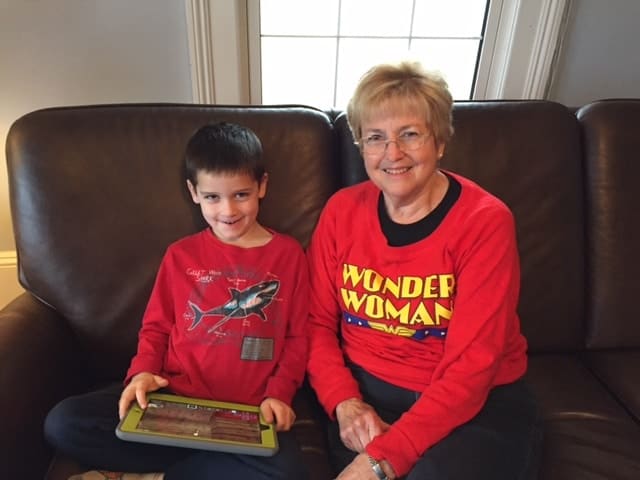 so she entertained the younger two boys while I headed to a board meeting at the preschool. I'll take a kid-free break any way I can get it. ? 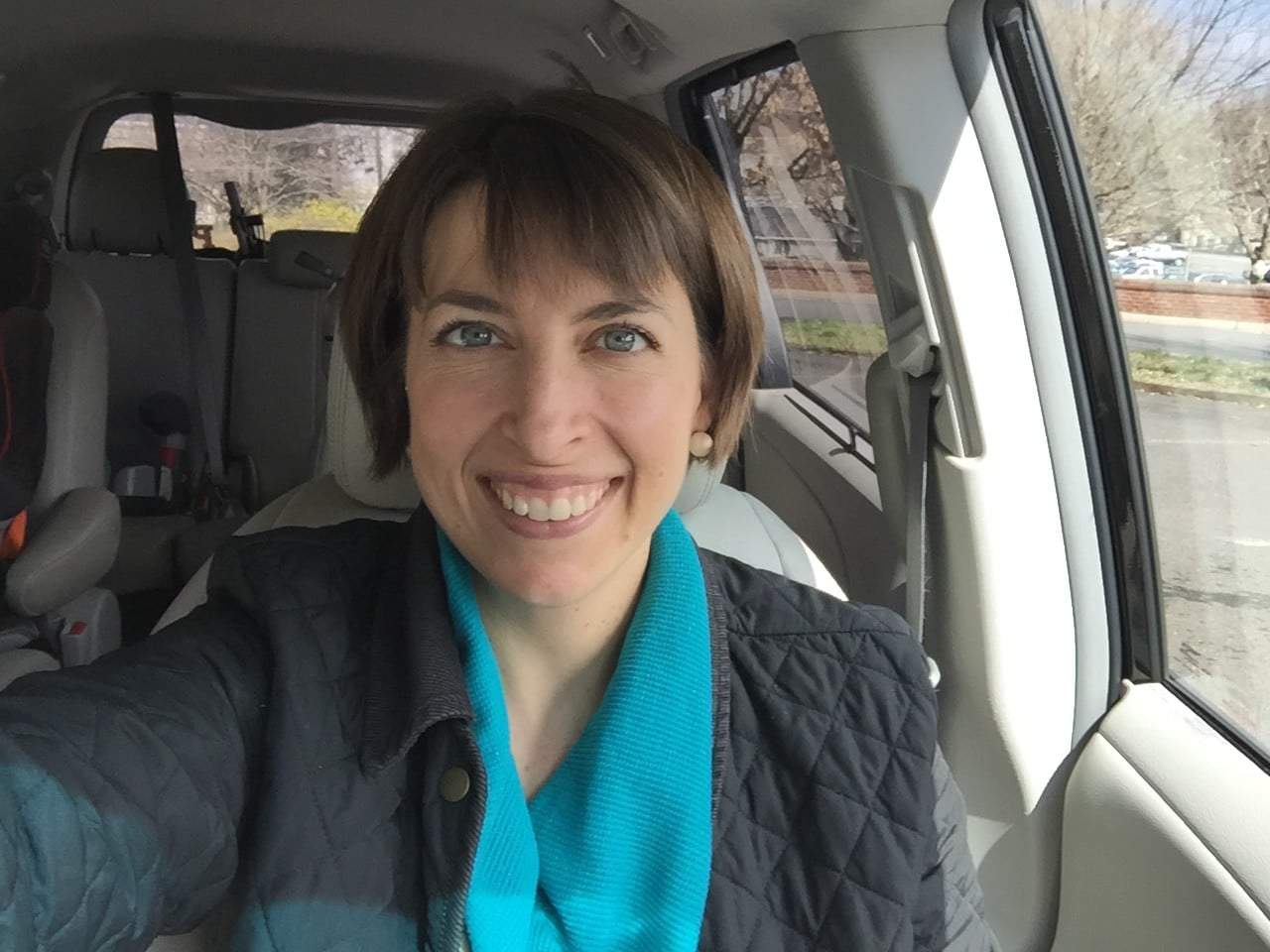 Dinner that night was super-easy! My aunt introduced me to Costco's Chicken Tortilla Soup, which is really good! I had some in the freezer so I served it along with quesadillas -- using up some of that unintentional taco sauce stockpile that I mentioned last weekend! 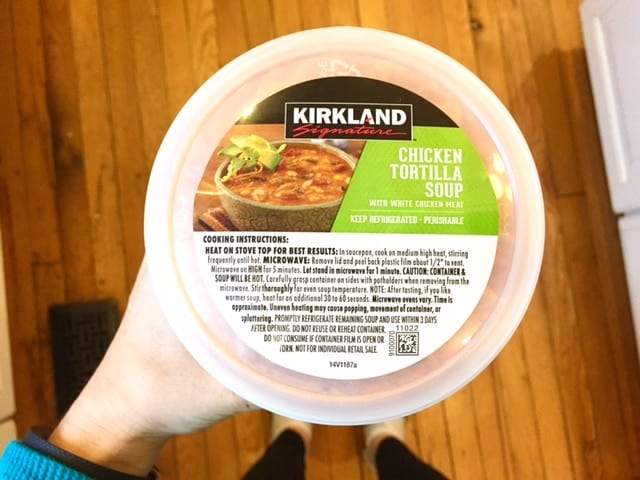 And I finally made the recipe for Green Pea Guacamole that Aunt Bee sent me a few weeks ago to serve on the side! 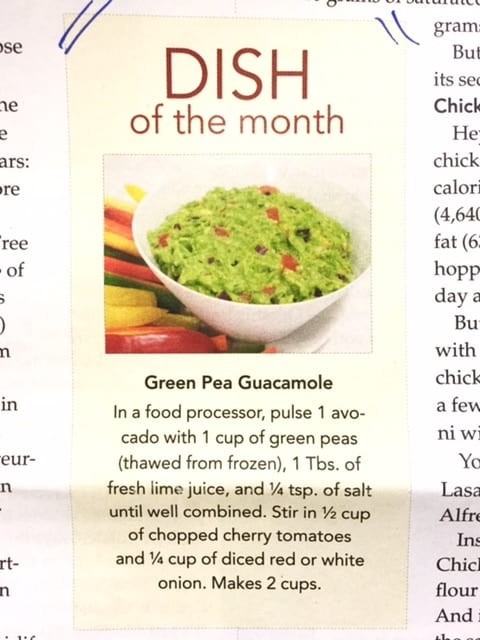 The guacamole was delicious, by the way!! I stirred in the cherry tomatoes after pureeing it in the food processor, but I skipped the raw onion because I don't love raw onion breath! I'll definitely make this again...

On Wednesday morning Spencer and I met Margeaux for a FOGGY walk in her neighborhood after the school drop-off rounds. 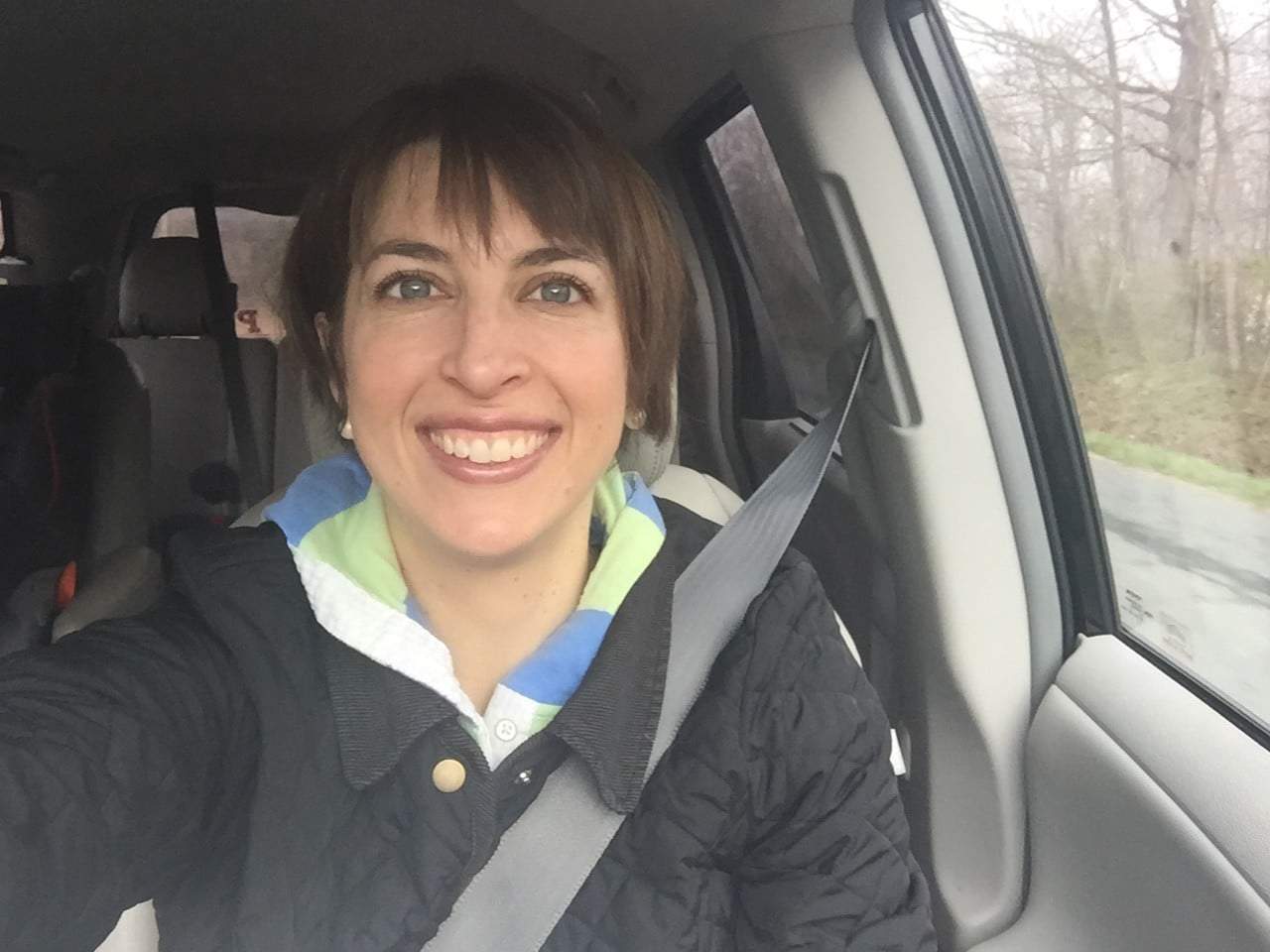 When the sun eventually came out, it warmed right up. The boys stayed busy "gardening" with their new tools from Carole (Big Hit!!), 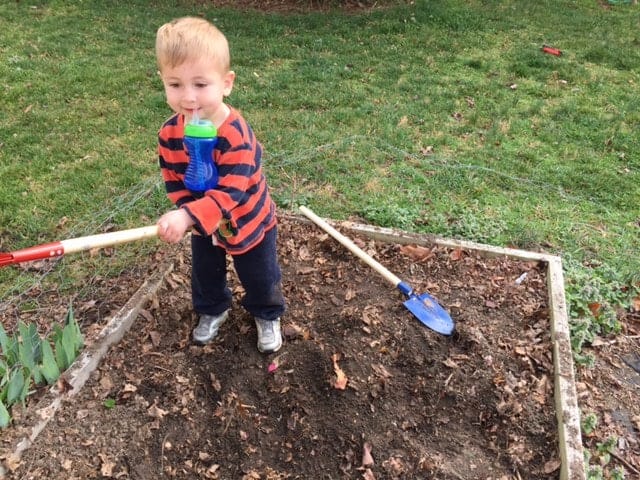 and later Casey and I enjoyed lunch on the porch while Spence napped. Casey's favorite sandwich of the moment is a "tomato sandwich" as he calls it, which is really just turkey, cheese, and sliced tomatoes. Emphasis on the tomatoes, I suppose! ? 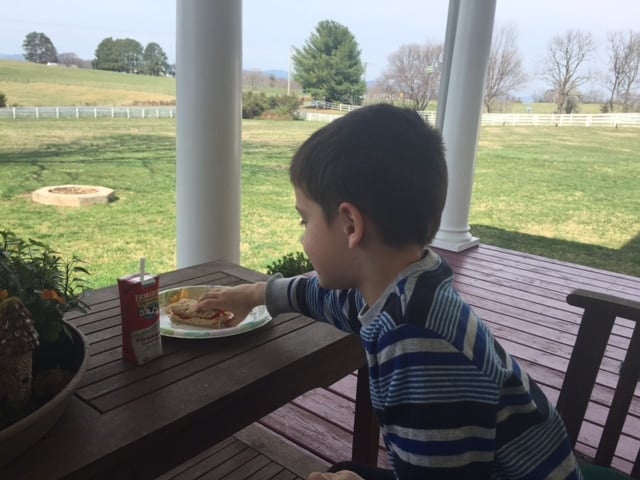 Thursday morning is typically when I head to the gym for our 5:30 a.m. boot camp class. Unfortunately (or fortunately?!) for me, the other ladies in the class have been sleeping in (or otherwise unavailable) on Tuesday and Thursday mornings, which means that I've had some intense one-on-one training sessions with Mark. You might remember Mark from his Chocolate Chip Cookie Workout?! Anyway, Mark and I have cooked up a plan to share some of our favorite personal training sessions with all of YOU, so that you can see what we're up to and maybe even incorporate some of the exercises or routines into your own workout plans. Sound fun? I dunno...wish me luck!

Mark has a knack for finding all of the moves that challenge me the most...and putting them in one complete workout. That means that in about 20-30 minutes, I get my booty handed to me in a way that I could never envision on my own. In the moment I feel like I'm dying, but when it's over I feel SO accomplished! Anyway, here's a peek at Thursday morning's assisted chin-ups. Man, they are SO hard! I think I maxed out at a grand total of 3 each set! ? Plus, the workout included burpees, push-ups, and battle ropes as well...

Since it was St. Patrick's Day, I made it home before my little Leprechauns woke up for a fancy breakfast of green milk and Lucky Charms. Can you tell that they were just a little bit excited about that? Dessert for breakfast! 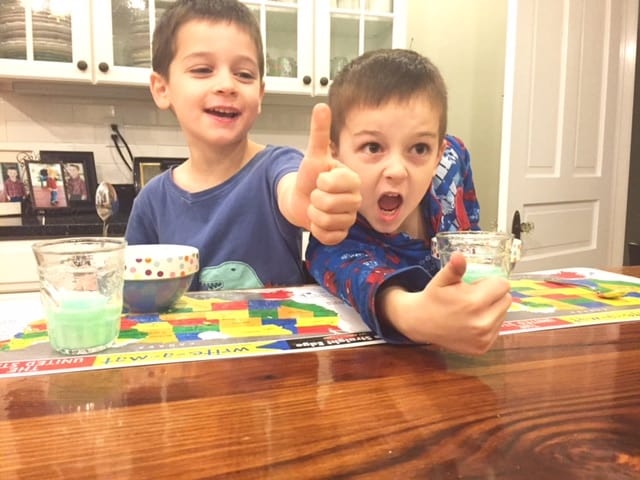 We had errands to run that morning, so we made stops at the grocery store and Costco after we took Gibbs to school. I sent Keith this picture because I was cracking up in the car when this song came on and Spence said, "Mom, it's My House!" and proceeded to sing along with the words. Have you seen that video?! Watch it and then imagine my baby singing it!! ?Definitely not age appropriate for a 2 year old, but still funny (or embarrassing?)... 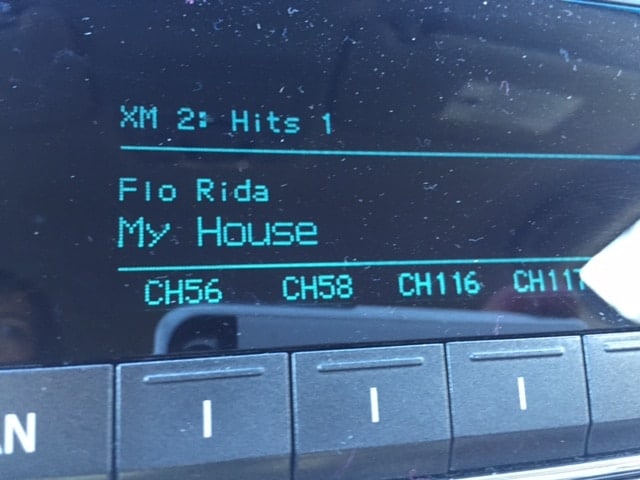 And I've learned that the only way to survive shopping trips with my boys is to let them eat during the process. They even carried their own lunch boxes into Costco! Desperate measures... 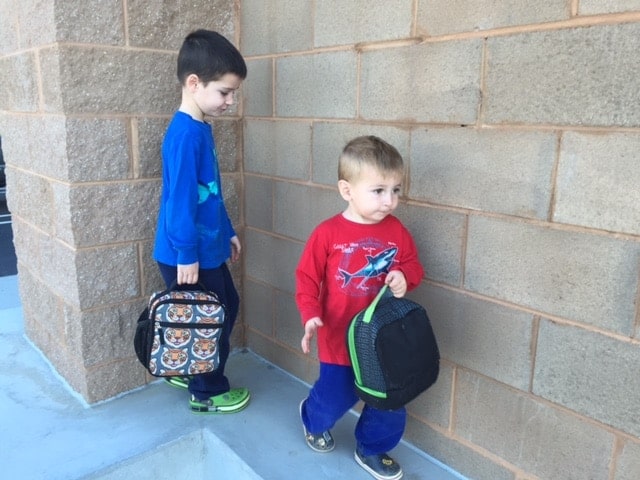 While in the store, I picked up this new-to-me Korean Barbecue Jerky since Margeaux had recommended it during our walk the day before. Here's my text to her since I tried it as soon as I got home... 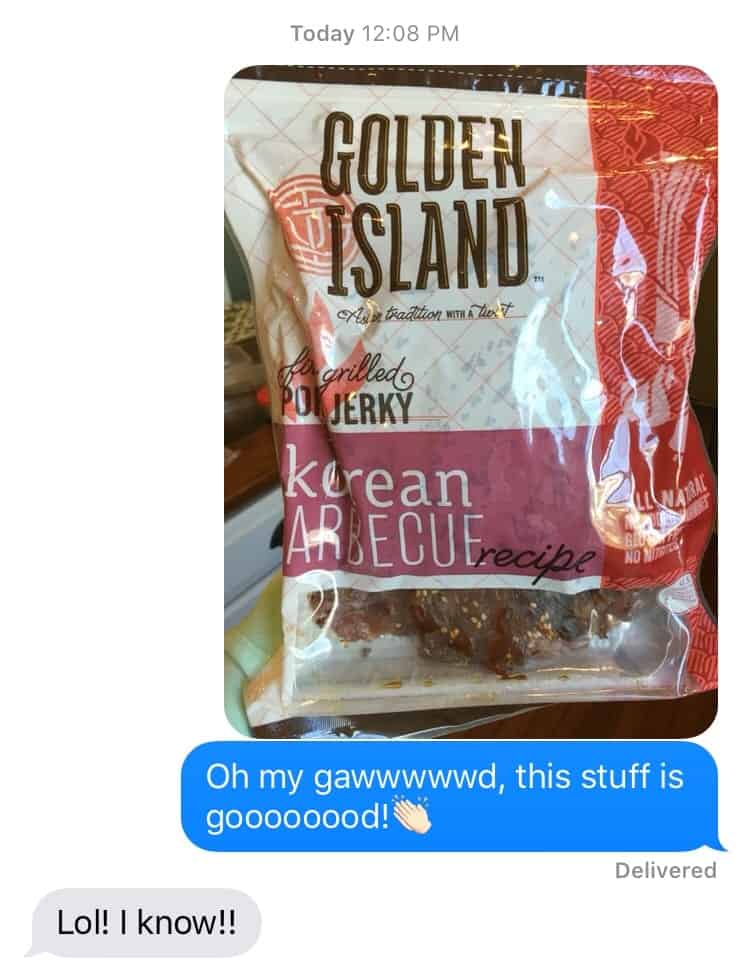 Find it. You'll LOVE it! It's got that salty-sweet-soy sauce thing going on, which is totally addicting...even for someone like me who NEVER otherwise chooses to gnaw on meat for a snack. And at least there are no nitrates and it's a good source of protein, so I figure I could find worse things to chew on!

The only part of our St. Patrick's Day dinner that was remotely Irish were these potatoes and the Brussels sprouts that I served alongside! Keith was out of town that night, so I couldn't motivate myself to make our typical leprechaun dinner of Guinness Soup and Reuben Salads. Instead, the boys and I kept it really easy with some chicken, cabbage (or Brussels sprouts!), and potatoes (or in our case, Alexia fries)... 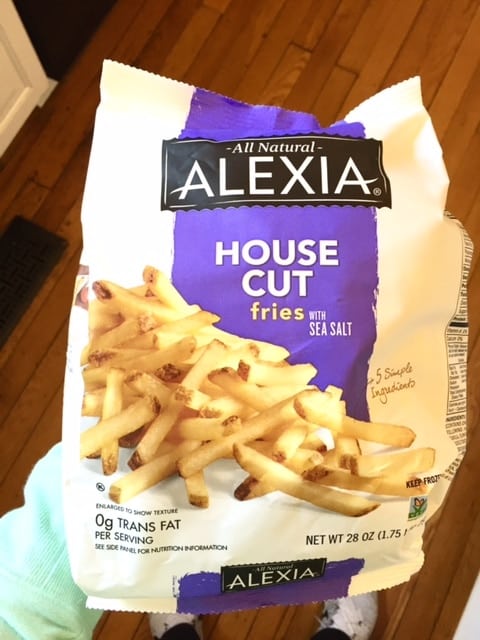 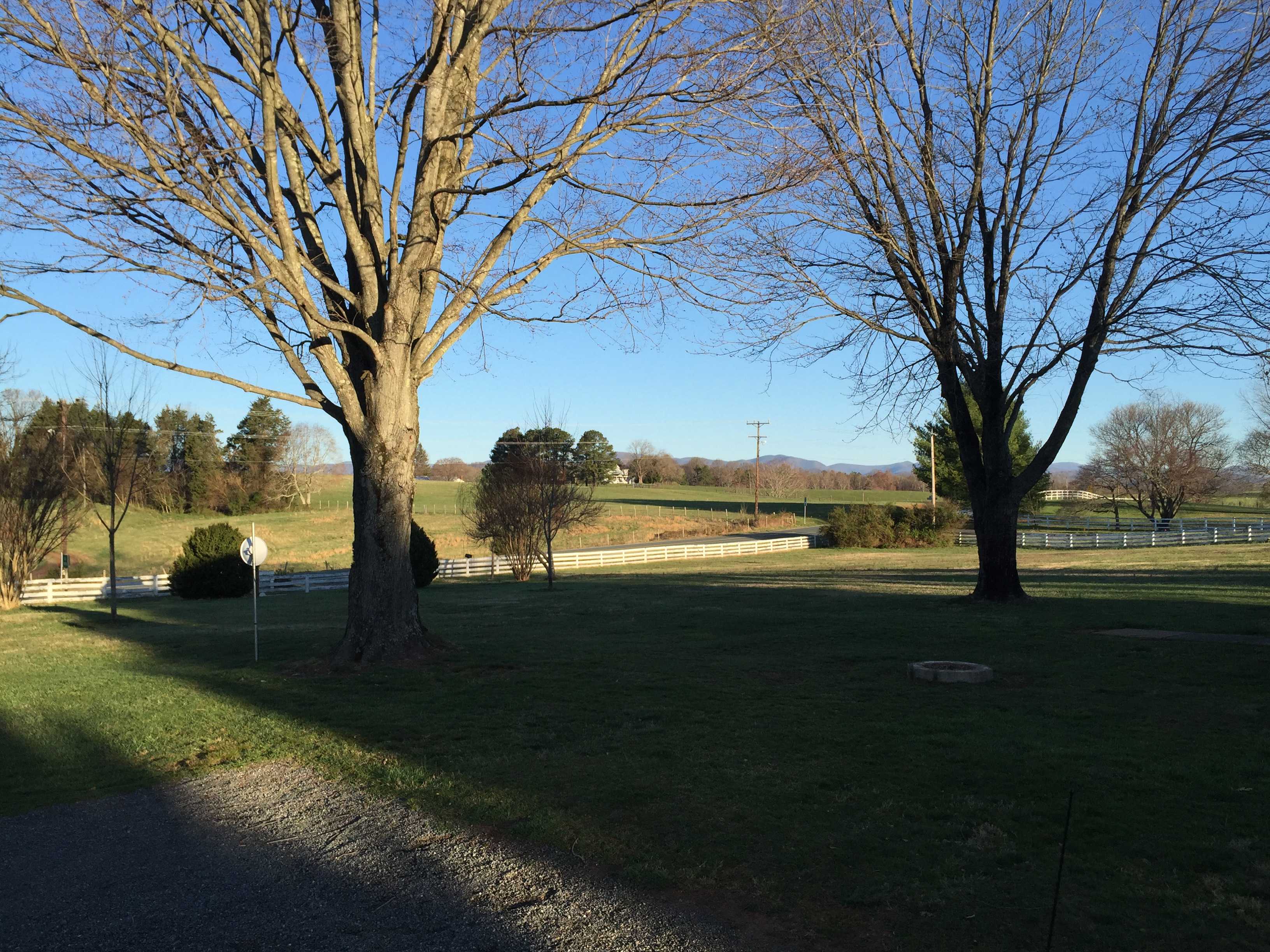 Spence and I went for a walk with Mollie and Amanda (and her son, Leo) after we dropped our boys off at school, 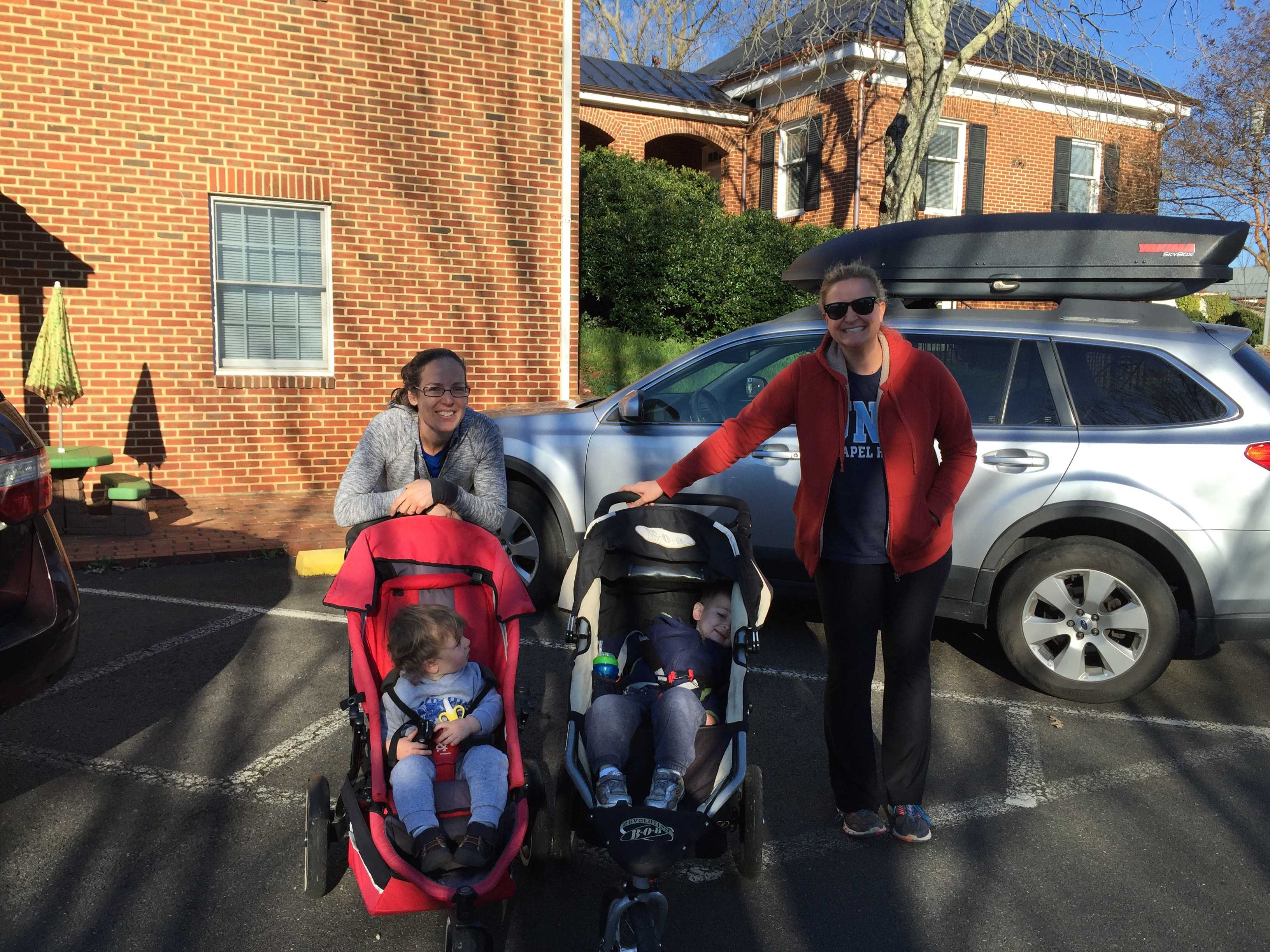 and then photographed some Creamy Greek Pasta Salad at home before racing back to the school to get Casey. Recipe coming soon... 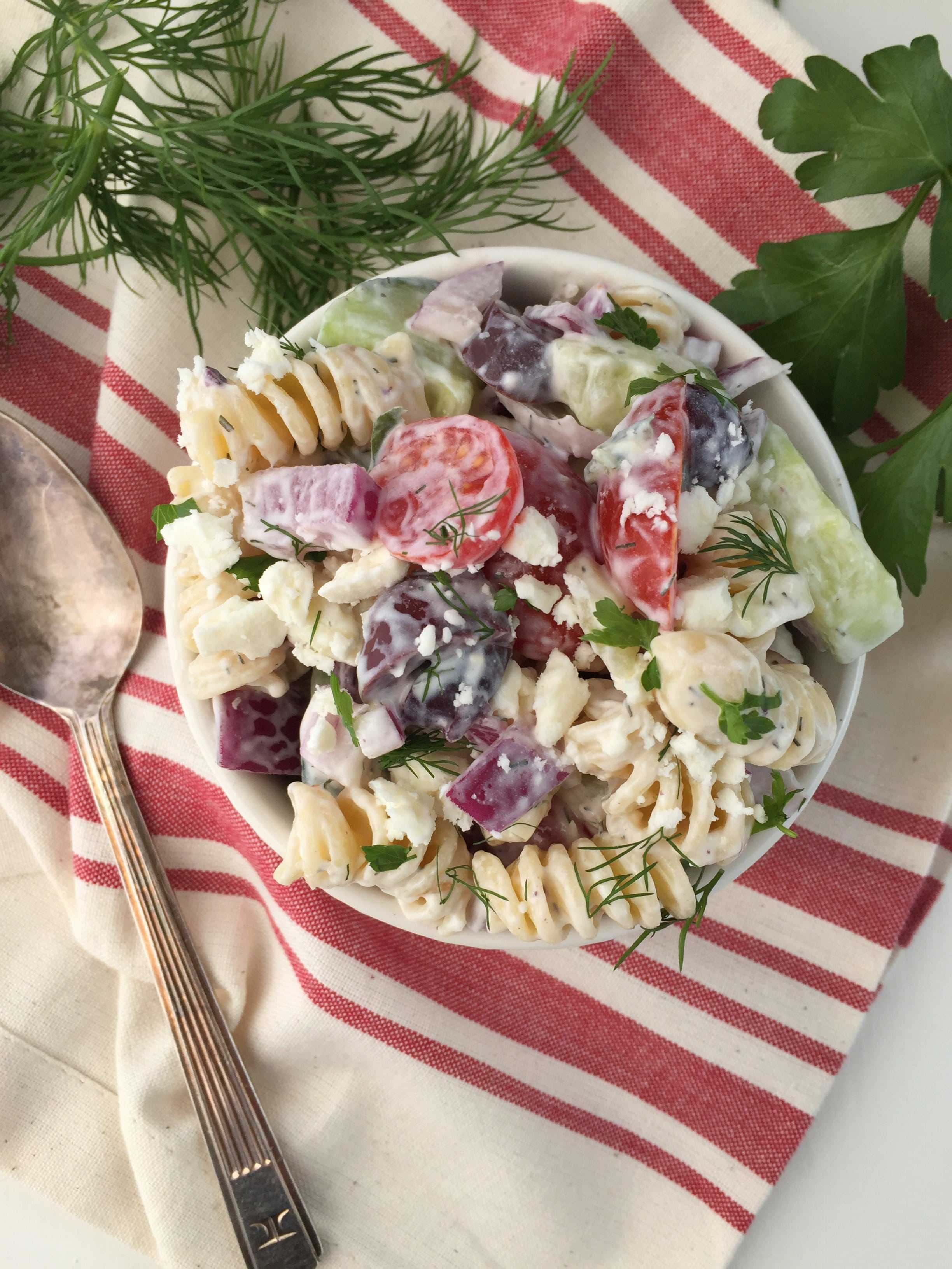 We had a peanut butter and jelly picnic lunch in the backyard that afternoon! 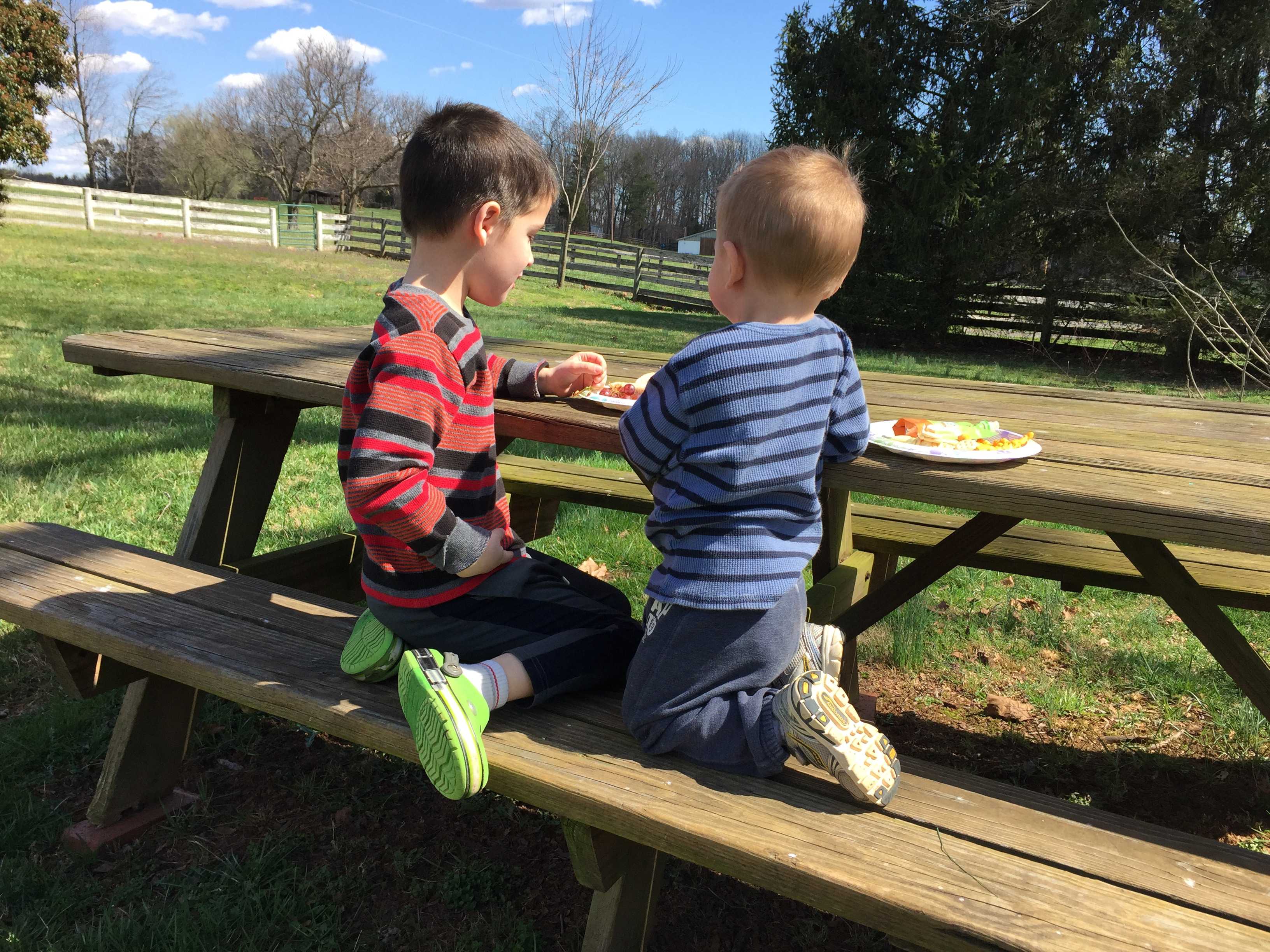 And dinner that evening was a seafood special for Lent. I was working on some recipes for my friends at Gorton's, so we had some of their new fish products, 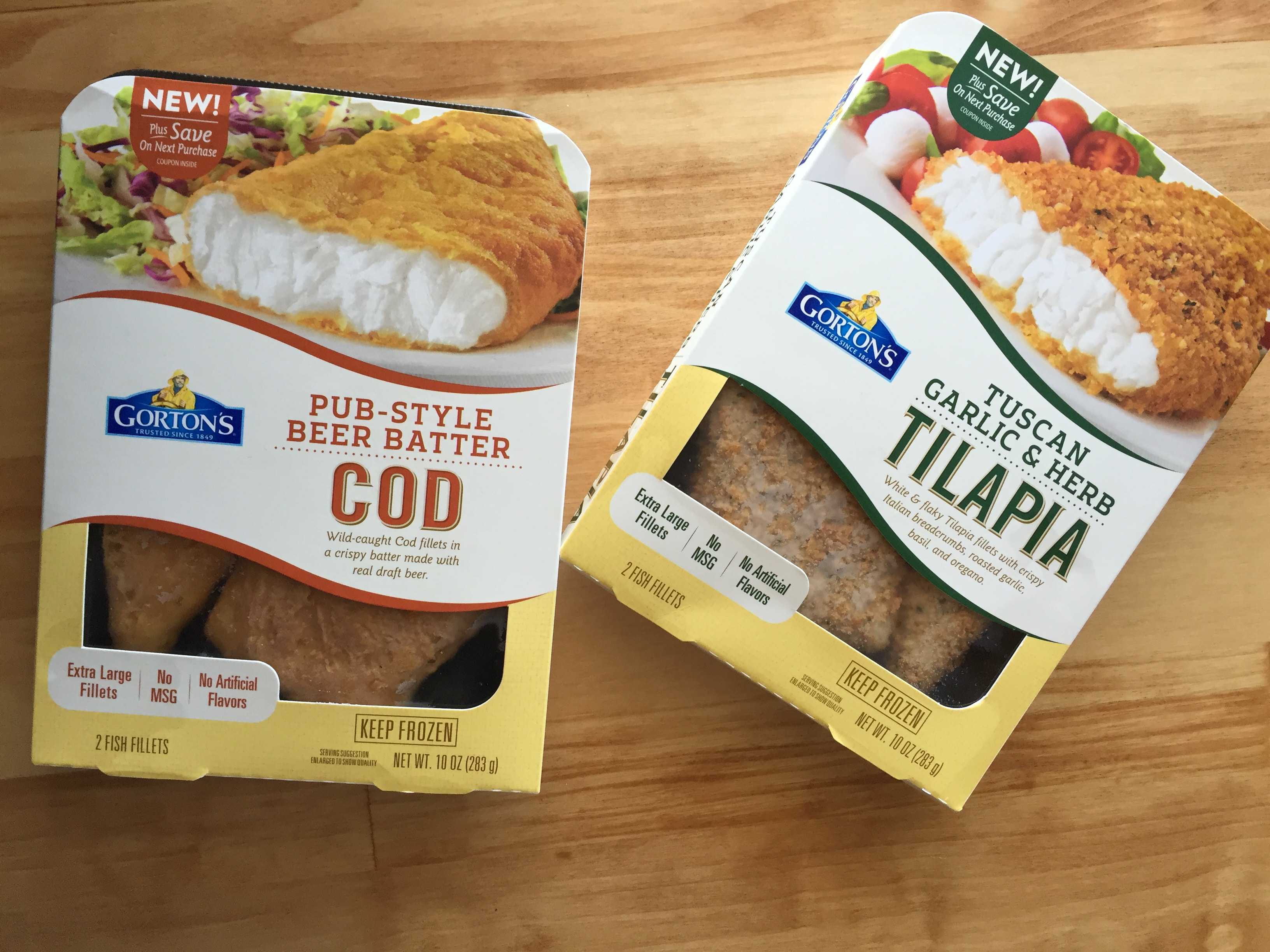 as well as the Greek Pasta Salad that I made earlier in the day and an Italian Green Bean Salad.

After dinner Keith and the boys set up his new Amazon Echo, which is definitely very cool technology! The kids had fun requesting songs, jokes, and weather forecasts, as well as creating shopping lists and checking March Madness scores! 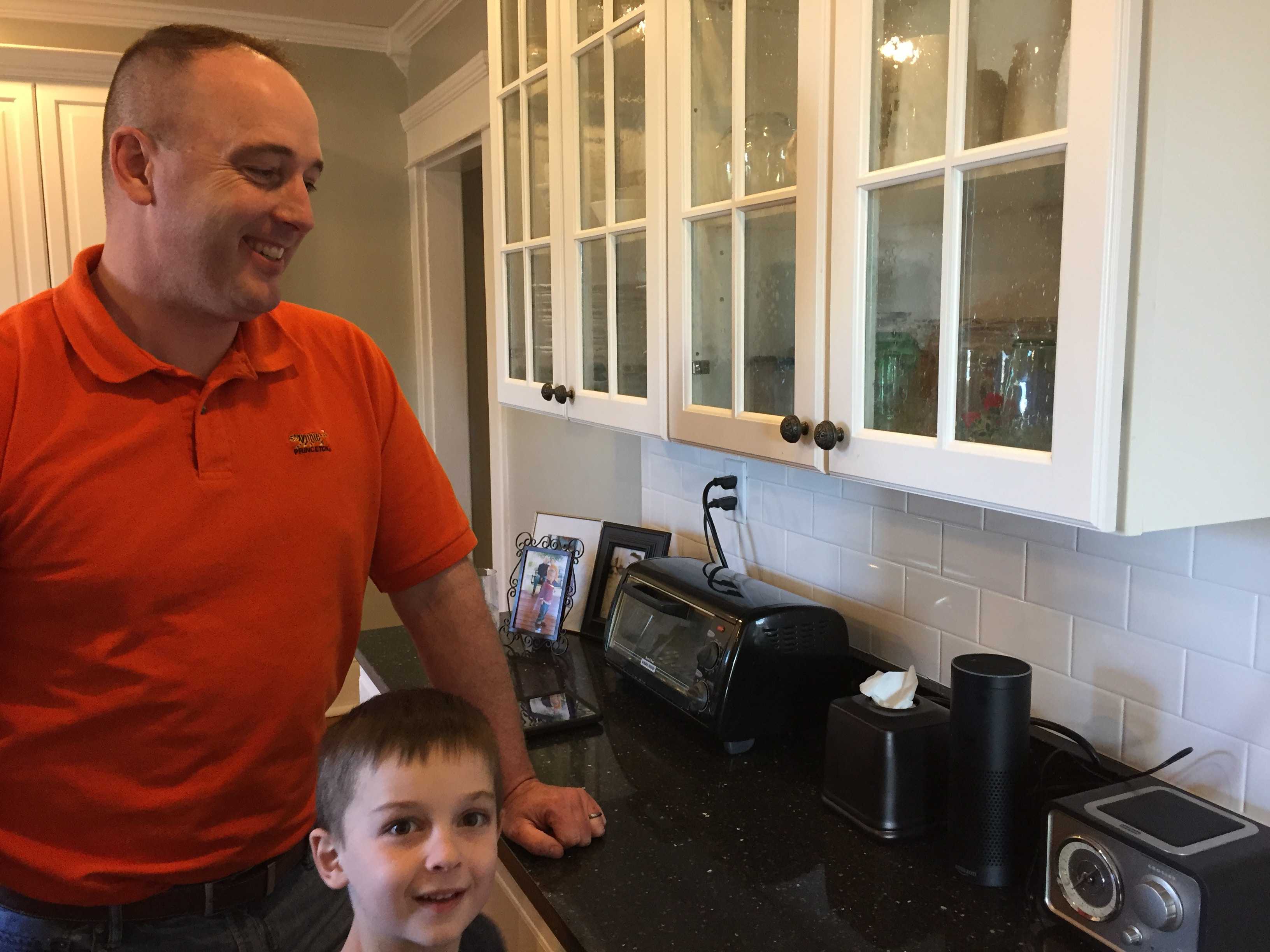 We watched basketball games on television that evening, I read my book in bed, and I was asleep by 10:00 p.m. Rockin' Friday night!

Saturday's forecast was cold and rainy, so I made an early trip to the gym to run a little over 2 miles on the treadmill (finishing the fourth week in my beginner's 5K Training Plan).

Stretching at the end is always the best part, right?! 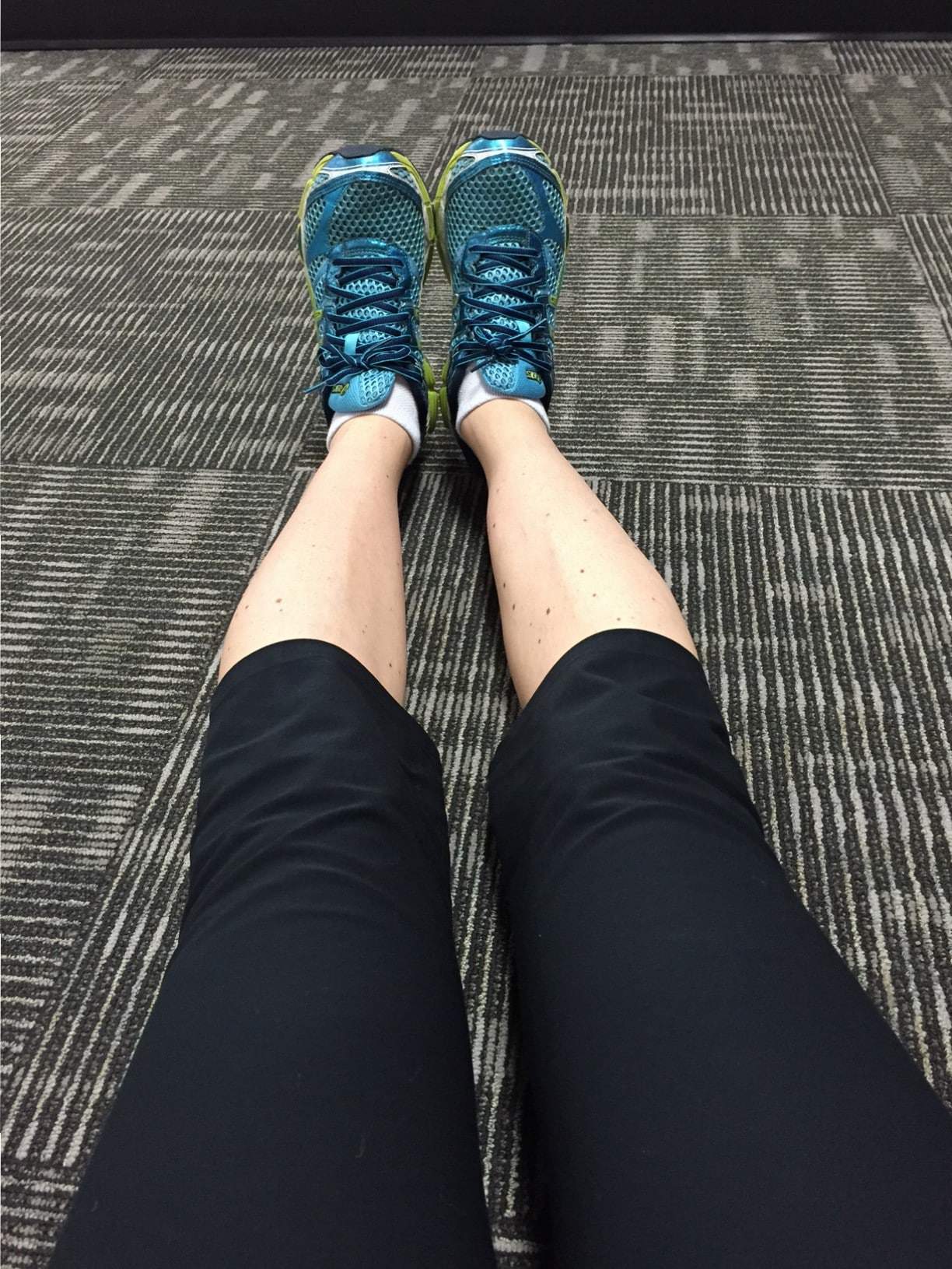 Aaaaaand we're sick again! I returned home before the kids woke up, but shortly thereafter Casey came downstairs and said he didn't feel well. It turns out that he had vomited ALL OVER his bed during the night without ever actually waking up. He didn't realize it had happened until he saw his filthy room the next morning. We were obviously sleeping soundly and didn't hear a thing either. So strange! Needless to say, I'll spare you any photos. I literally spent the rest of the day in a cleaning and laundry frenzy. I did at least 6 (maybe 7?) loads of laundry, and that was just sheets, pillows, stuffed animals, our bed sheets, and 1 load of our clothes. All I can say is thank goodness for Lysol, bleach, and waterproof mattress pads!

And while we're on the subject of cleaning, I pulled this Southern Lemon Chiffon soap out of the pantry to replace the bottle that we finished in the kitchen. This scent is SO great and it was literally a breath of fresh air after the morning's mess! ? 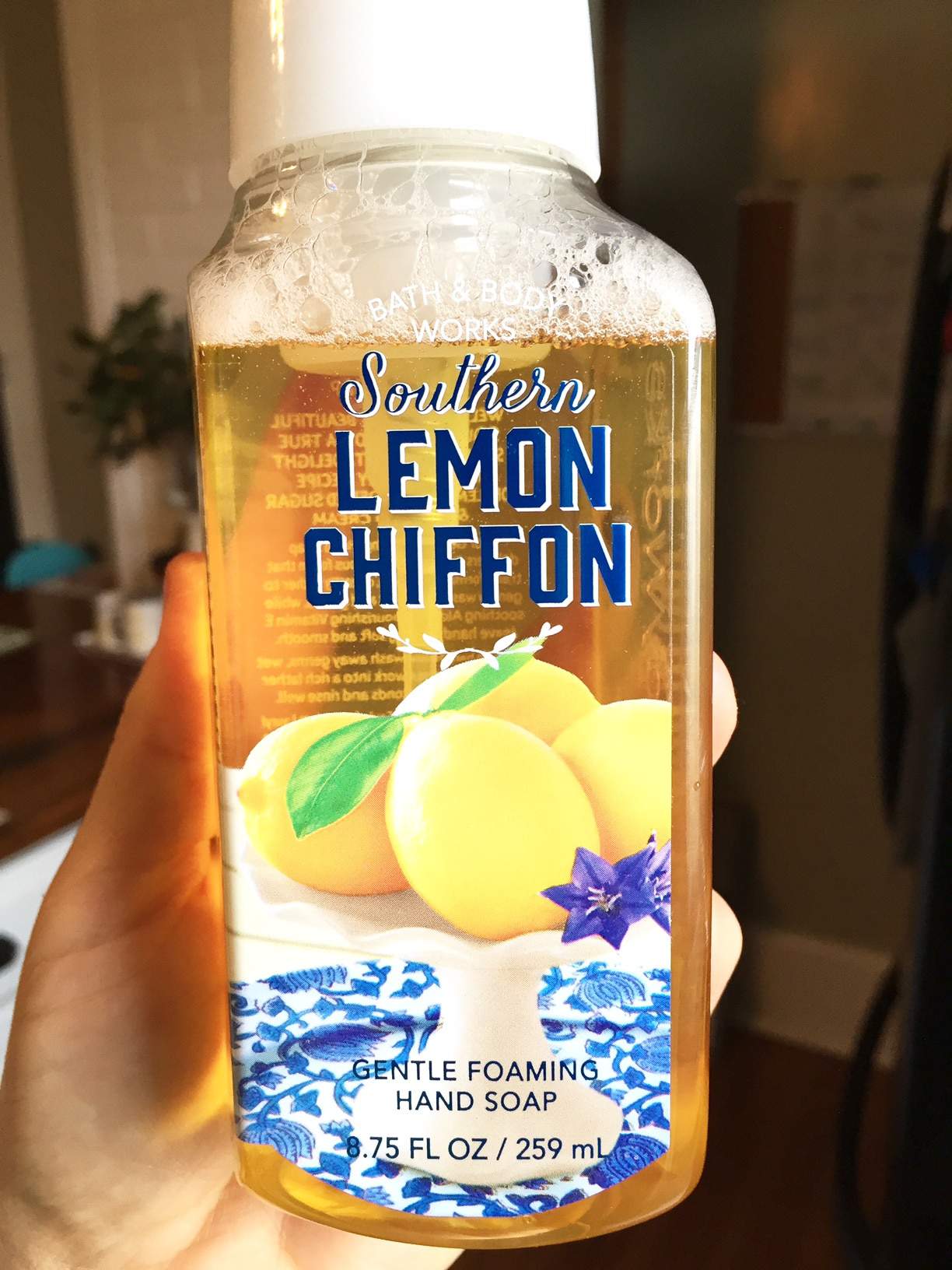 Today will be another quiet one so that Casey can continue to recover. We have a quick trip to Target planned so that the boys can pick out supplies for their class Easter parties, but other than that we'll be taking it easy. We've got another busy week ahead of us! Have a great Sunday, friends!