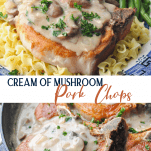 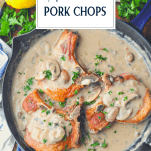 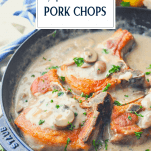 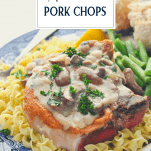 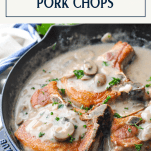 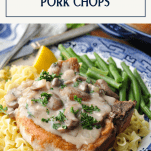 An old-fashioned recipe for Cream of Mushroom Pork Chops gets an upgrade with fresh mushrooms, garlic, onion and herbs in a simple creamy gravy. Thanks to a quick sear on the stovetop, these pan-fried pork chops develop a beautiful golden brown exterior while staying tender and juicy on the inside. It's the perfect easy dinner for your busy weeknights!

You can use bone-in pork chops, boneless pork chops, thick chops or thin -- whatever you prefer. Serve the meat and gravy over egg noodles, rice, or mashed potatoes. This simple, hearty, comfort food supper is totally adaptable...and completely delicious!

How to Cook Pork Chops with Cream of Mushroom Soup

Stove top pork chops with cream of mushroom soup turn out tender, juicy and flavorful every single time! You have complete control over the cooking time and temperature of the chops, so they don't get dried out, tough, or overdone in an oven or slow cooker. Best of all, there's only one skillet to wash at the end. This hearty, down-home meal is cozy, simple and perfect for busy evenings.

Pat the pork dry and season with salt and pepper.

Brown the chops in hot oil until they're cooked through, then remove to a plate.

In the same skillet, make the mushroom gravy with the fresh mushrooms, diced onion, garlic, soup and milk. You'll add a touch of fresh parsley and a dash of lemon juice at the end, just to brighten it up.

Add the pork back to the skillet, spoon the gravy over top, and serve!

How to Cook Pork Chops without Drying them Out

Another good tip for juicy pork chops: pick thick-cut chops (boneless or bone-in) with plenty of marbling and fat. The more fat on the chops, the juicier they will be!

How long do you cook stove top pork chops with cream of mushroom soup?

As always, use a thermometer for the most accurate timing. Remove the pork chops from the skillet when they reach an internal temperature of 145 degrees F.

What to Serve with Cream of Mushroom Pork Chops

The smothered pork chops with cream of mushroom soup pair well with so many different sides. Pick your family's favorites, such as:

To Reheat: Allow pork and sauce to come to room temperature on the counter for about 30 minutes. Place in a skillet over low heat. Cover and cook just until warmed through, about 5 minutes. 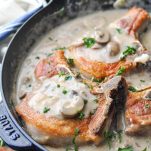