Hi, friends! Has everyone been enjoying the holiday weekend? We have had an eventful few days...ready for some highlights?

The older two boys had summer camp each morning this past week, so Spence and I had quite a bit of quality time together. I'd say that one of his favorite days of the week was when we stopped by Yoder's Country Market to return our milk bottles and pick up some other groceries. He always loves to feed the animals before we head inside, 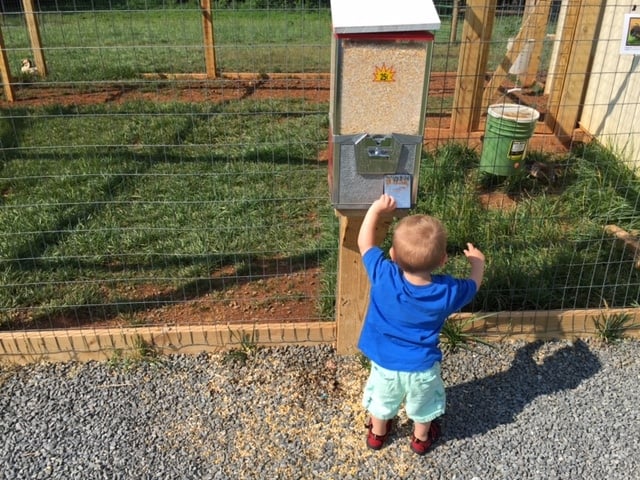 but THIS was really exciting! 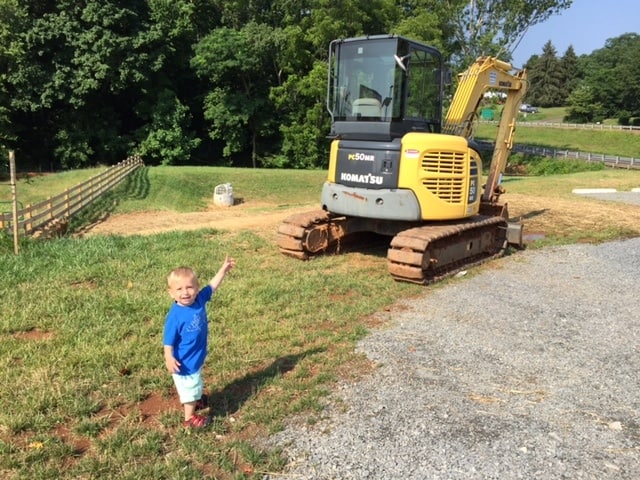 Keith had a work holiday on Friday, so he was in charge of summer camp transportation in the morning while Spencer and I headed into Charlottesville for my doctor's appointment. Charlottesville recently got its first drive-thru Starbucks, which just happens to be right across the street from my doctor's office. Spence was napping in the car, so it seemed like the perfect opportunity to grab a Caramel Cafe Misto! 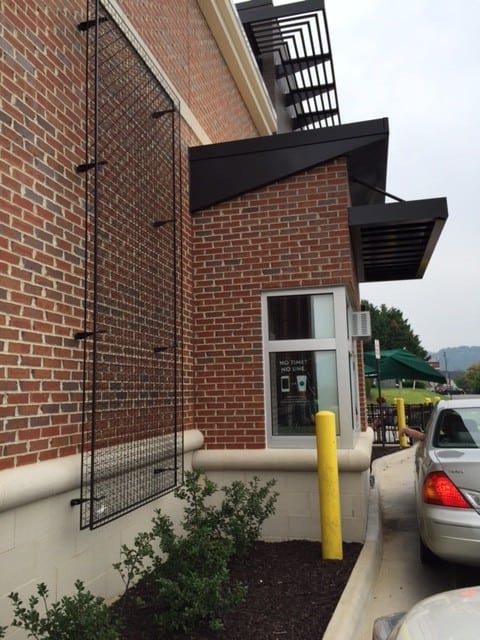 I entertained this guy during my appointment with plenty of Matchbox cars (my legs are some of his favorite "roads"), 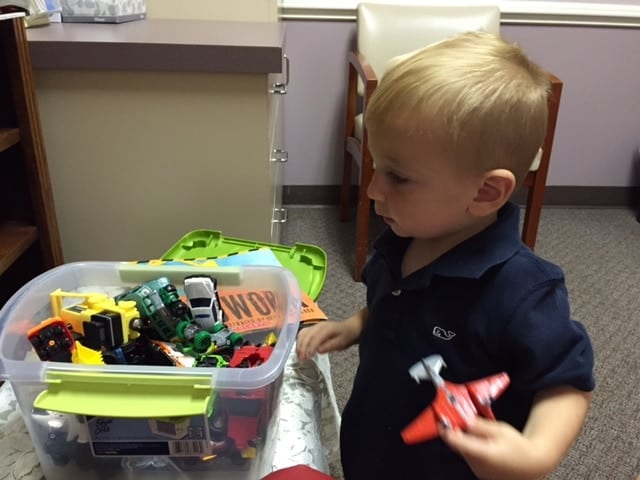 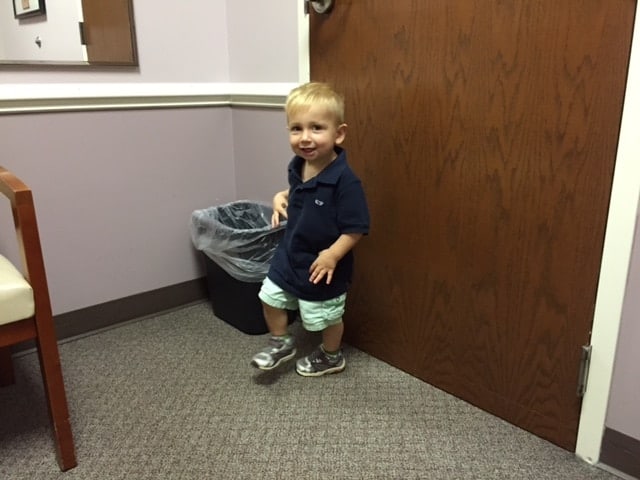 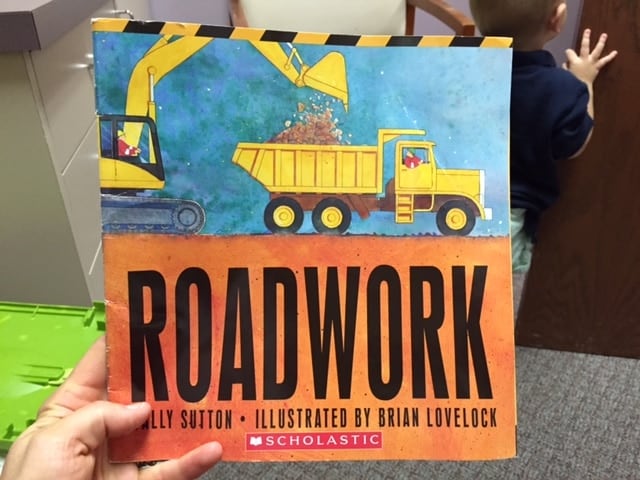 Then we ran some errands, which included a pair of new shoes for his constantly growing feet, 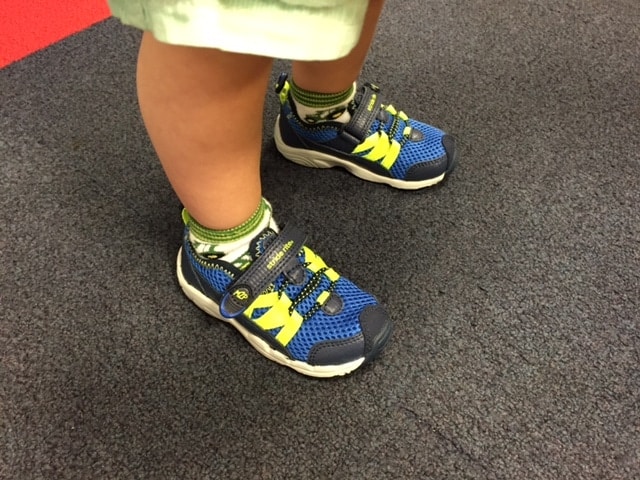 and met up with Keith and the older two boys for a post-camp lunch date. Of course, the boys wanted to hit up their favorite spot for some *gourmet* sushi, pizza, fried chicken, General Tso's chicken, and just about anything else that your heart could desire... 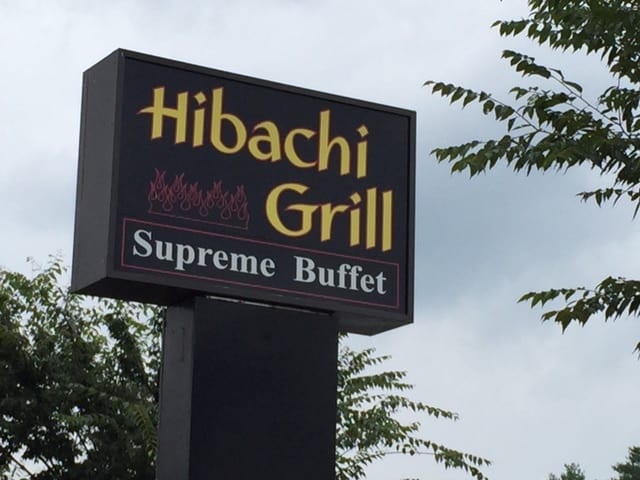 After lunch we headed south to Keith's parents' mountain house at Wintergreen for some family time. 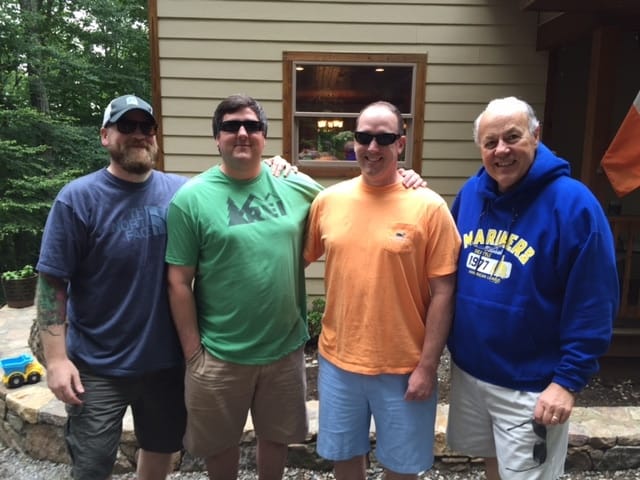 Both of Keith's brothers (and their families) were there too, so we had a lot of big and little boys running around. Doing "boy things"... 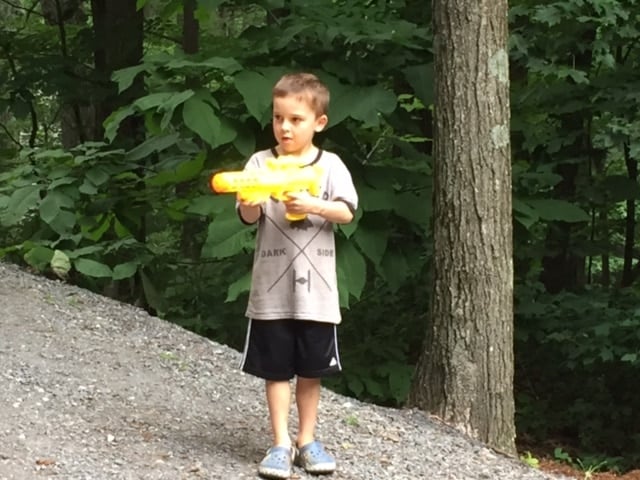 It was very obvious that boys never really grow up. They still enjoy the same games, even when they're dads. The only difference is that they play those games with beers in hand. 🙂 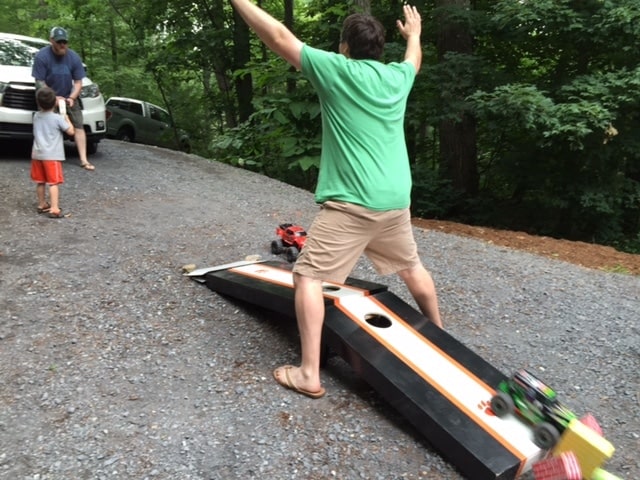 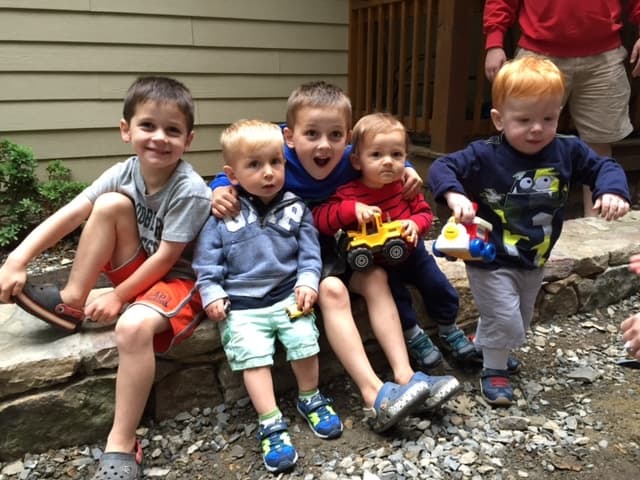 And a handful of ladies thrown in the mix to ride herd on the crowd.

Me, Meghan, and Tina (Boy Mammas!) 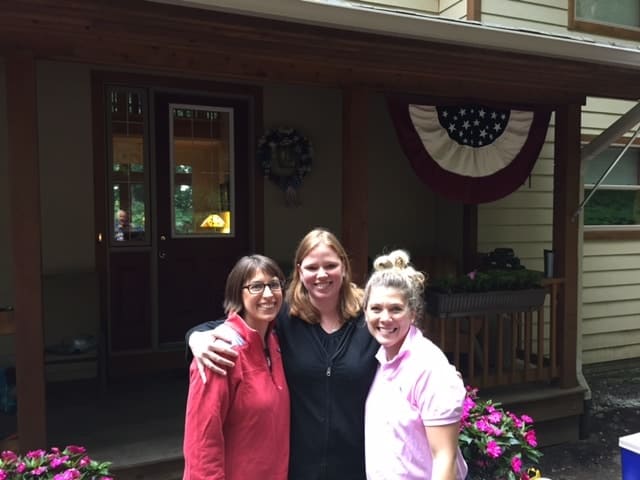 The older boys spent the night at their grandparents' house while I brought Spence back home to his crib. He fell asleep in the car at 6:45 p.m. (his normal bedtime), but didn't wake up yesterday morning until I finally went to check on him at 9:15 a.m. If my math is correct, that's approximately 14.5 hours of sleep. Think the kids was tired?!

Once he was up, I fed him a quick breakfast of raisins and his favorite waffles, 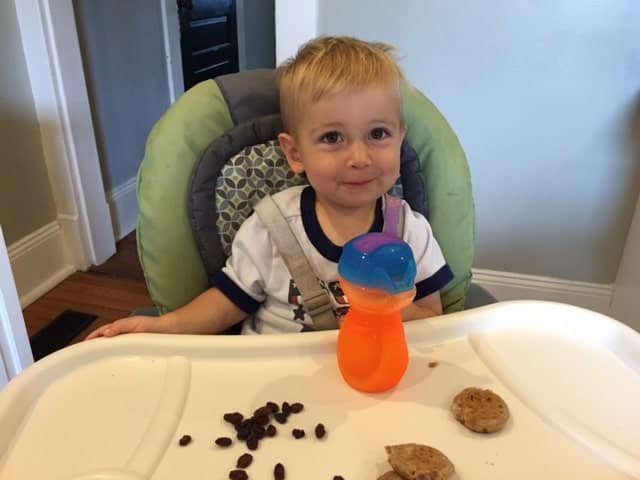 before we left for the Farmer's Market. My little firecracker had fun dancing to the bluegrass band that was playing! 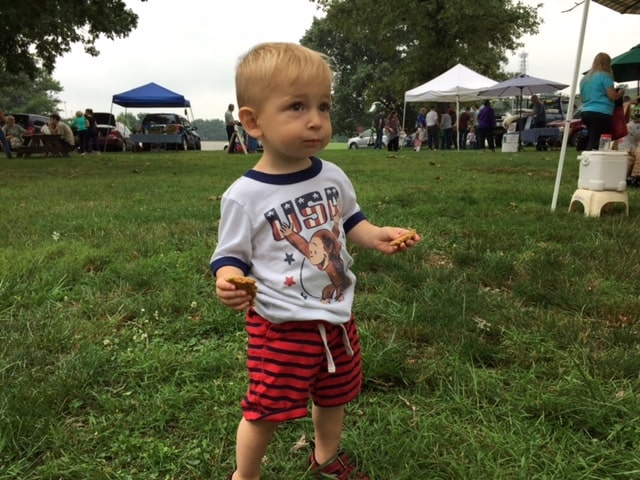 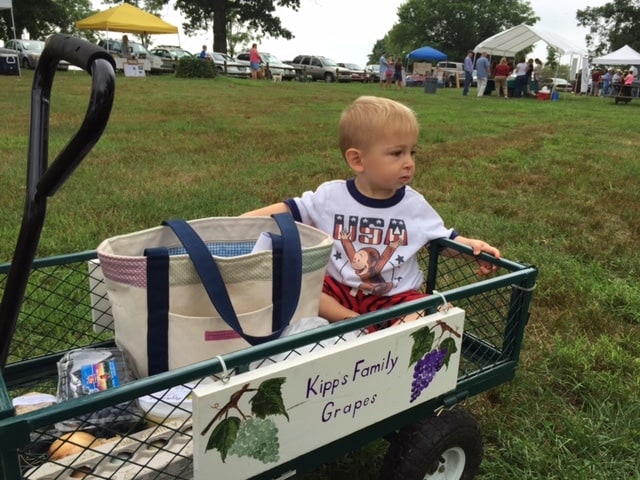 Then we made a quick run to the grocery store before returning home for lunch on the porch. 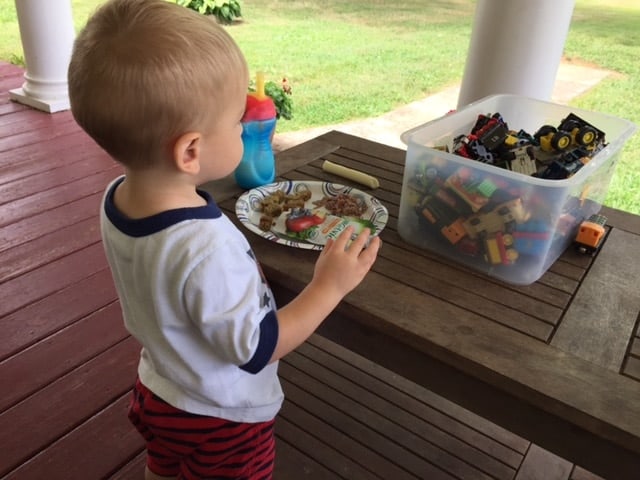 After lunch we played with cars, read some books, and then Spence was ready to go down for a nap.

While he slept, I prepped, photographed, and snacked on a deeeeeeelicious Mediterranean-inspired recipe. Sneak peek (details coming soon)... 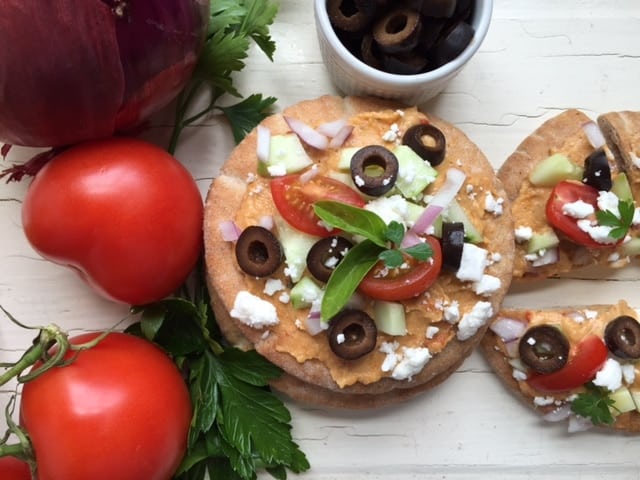 The boys arrived home shortly after lunch, and Gibbs immediately asked to go to his room for "quiet time." I think the excitement of the visit to the mountain exhausted everyone!

Unfortunately, Spence only slept for about 1 hour, because he woke up screaming when Keith decided that it would be a good idea to shoot off some 4th of July fireworks right outside the house...while the baby was sleeping. Grrrr...

Like I said, little boys never truly grow up!

It rained off and on the rest of the afternoon, so we laid low. The older boys were so tired that there were many tears and meltdowns before dinner, and Gibbs fell asleep in his clothes by 6 p.m.

Since we had burgers and hotdogs on Friday evening, we went with a different all-American menu for our 4th of July dinner. Keith grilled steaks and chicken, which were served alongside a green salad, a pasta salad, and French bread. 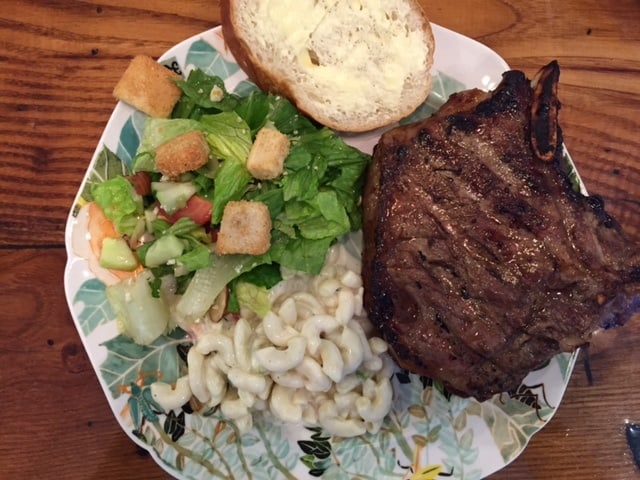 And much to Keith's dismay, there weren't any big fireworks at our house on Saturday night. These battery-operated sparklers from my mom were about as close as we got! 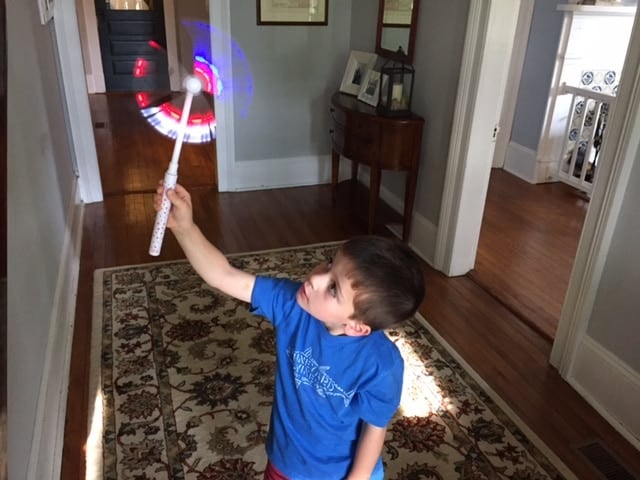 Keith tried to set off some bottle rockets before dinner, but Spencer was terrified and screamed hysterically, while Molly (the dog) paced, shook, and panted uncontrollably. He agreed that the rest of his stash should probably be saved for a later date.

Instead, we put the boys to bed early and watched the movie American Sniper. Keith really liked it, but I just thought it was...stressful. 🙁

This morning we stayed close to home and took care of housework like laundry and yard chores. I cut up a bunch of melon, with my buddy alongside to eat half of it... 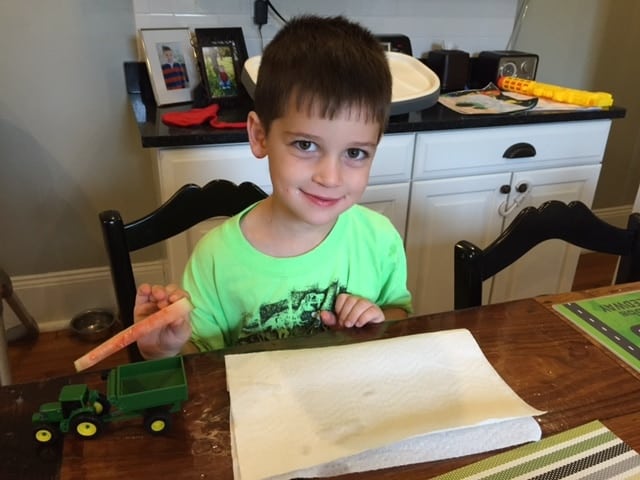 while Keith picked blackberries from the front of our property. 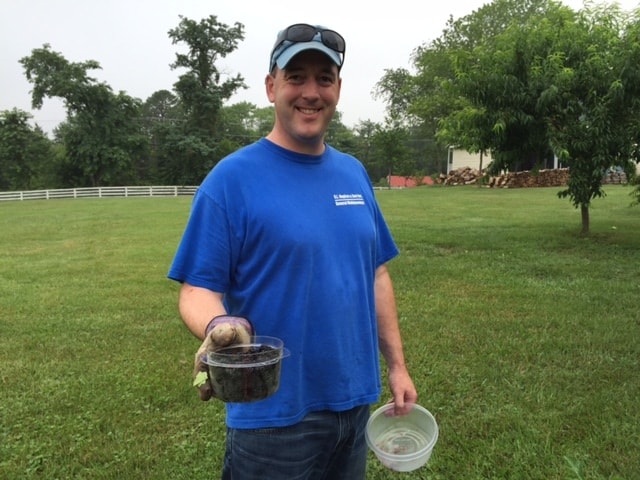 We also pulled some veggies out of the garden, including cucumbers, green beans, and zucchini. The corn, tomatoes, and watermelon are looking good, but they're not quite ripe yet. 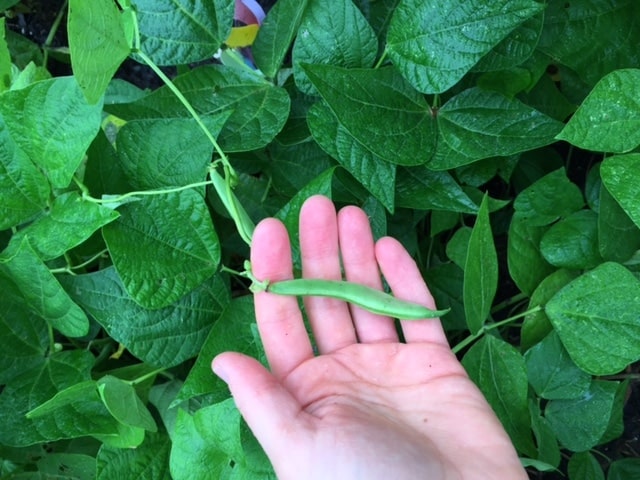 And the peaches...they keep coming! Keith hauls in bags full of them every couple of days. I've been throwing them into everything, from breakfast recipes to desserts and salads. In fact, I made a Southern Peach Salad to bring with us to a cookout at Margeaux's house this evening to celebrate her birthday. Recipe coming later this week!! 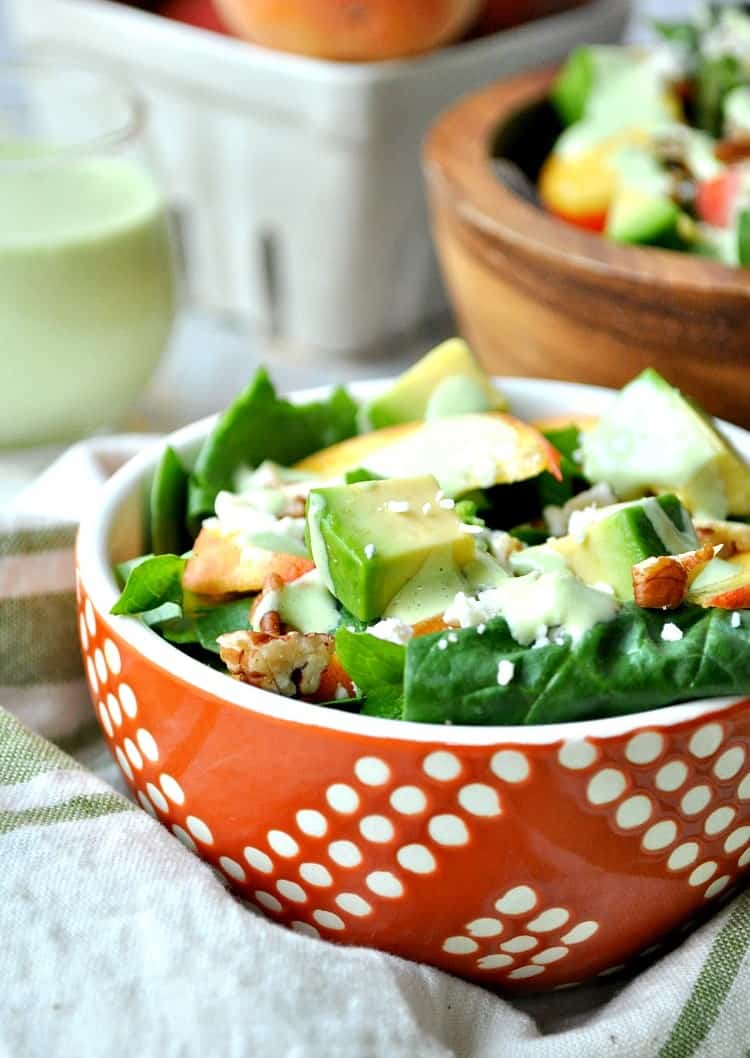 And now we're off to get ready for the party! Oh, and deal with a leaking water pipe somewhere near the kitchen. Drip, drip, drip. This could get interesting...

I hope you all had a wonderful long, holiday weekend. See you back here tomorrow for an easy and healthy side dish recipe that's perfect for the season...