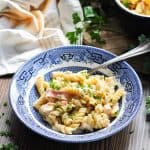 A 10-minute crowd-pleaser, this Dump-and-Bake Chicken Bacon Ranch Pasta is an easy dinner recipe for your busiest weeknights -- and you don't even have to boil the pasta!

Can Chicken Bacon Ranch Pasta be made ahead?

Yes, you can assemble this casserole up to 8 hours in advance. Keep it covered in the refrigerator until you're ready to bake. If you're baking it from the refrigerator, allow the dish to sit on the counter and come to room temperature (or add a few extra minutes to the suggested baking time).

I do not suggest freezing this casserole before or after baking. I worry that the texture of the pasta will be mushy when thawed, and there's a chance that the creamy sauce will break.