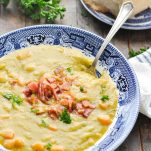 A healthy and easy dinner recipe that warms and satisfies your body! This classic Instant Pot Split Pea Soup can be prepared in the slow cooker or on the stovetop, too.