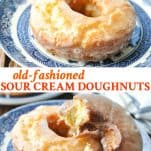 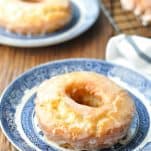 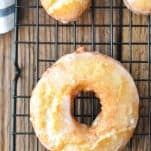 Yes, you can make Old Fashioned Donuts at home with only a handful of basic ingredients -- and no yeast! Just like your favorite bakery treat, these cake doughnuts have a crisp, golden brown exterior, a light and fluffy inside, and plenty of nooks and crannies to hold that sweet glaze. Perfect for dunking in coffee!

If there's one food that we've missed while being stuck at home over the past few weeks, it's definitely fresh donuts. In normal times, it's very easy to just drive through the window at Dunkin' and pick up a few old-fashioned sour cream donuts (my favorite!) -- but these are not normal times. Instead, this self-proclaimed non-baker, who tends towards cake mix recipes and store-bought cookie dough, has resorted to making Old Fashioned Donuts at home. What world are we living in?!

In all honesty, though, this recipe is actually really easy. It's time consuming -- because there's a lot of waiting and downtime while the dough chills, and then again while the donuts cool -- but there's nothing difficult about it. In fact, it's a lot like making cookies, with one main difference: you're frying the donuts in oil instead of baking them in the oven. Otherwise, it's practically the same process, including mixing, chilling and cutting out dough. And since we're not running off to sports games each weekend or hustling out the door to complete a laundry list of errands, we've got time to "play" in the kitchen and treat ourselves to a homemade breakfast. I hope you'll join in the fun!

What are Old Fashioned Donuts?

Before we get started, let's be clear about what we're making here. These are old-fashioned sour cream donuts -- a cake donut that does not require yeast. The old-fashioned doughnut is prepared in the shape of a ring and has tapered edges (those nooks and crannies that I was telling you about earlier). Cake doughnuts originated in the United States in 1829, and the typical ingredients in old-fashioned cake donuts include flour, sugar, eggs, sour cream (or buttermilk) and leavener (the baking powder, in this case). Cake doughnuts first appeared in American cookbooks in the 1830s, around the same time that baking soda and baking powder first became commercially available.

Old-fashioned doughnuts are deep fried and then glazed, dusted with sugar or enjoyed plain. They have a rich flavor, thanks to the sour cream, and a crunchier texture than other cake doughnuts. That classic crunchy exterior is a result of deep-frying the donuts at a lower temperature than is typical with other donuts.

It's not entirely clear how old fashioned doughnuts got their name, but one theory is that they simply look cracked and more "old-fashioned" than the smooth, modern yeast donut (source).

How to make Old Fashioned Donuts:

As I mentioned above, this process for making Old-Fashioned Donuts from scratch is not difficult at all, but you need to bring your patience...because there's plenty of downtime while you chill the dough and wait for the donuts to cool.

I cannot take full credit for this recipe, which I borrowed (and tweaked) from this site. I did change the glaze and the cooking process slightly as well, and the end result is a simple homemade donut recipe that even non-bakers like myself can achieve! Let's get started...

Ingredients for the Donut Glaze:

This recipe calls for cake flour, which is a flour that is very finely milled from soft winter wheat. It has a lower protein content than all-purpose flour, and it is finer, lighter, and softer. It’s also bleached, so the color is paler and the grain is less dense. It's important to use cake flour in this recipe because it contributes to that light, fluffy donut texture that we all know and love. Do not substitute with all-purpose or other flours.

If you don't have cake flour at home, I'm with you! It's not something that I regularly keep in my pantry, so I've got a great tip for making your own cake flour at home (if necessary). There's a very helpful tutorial for a homemade cake flour substitute here. In short, you can use a combination of all-purpose flour and cornstarch sifted twice to replicate the consistency and baking properties of cake flour.

Before you set out to make the donuts, it's helpful to be sure that you have everything you'll need. Here are a few items that will make your sour cream doughnuts an easy success:

Step 1: Sift together the Dry Ingredients

Next, make the dough in the same way that you would make a cookie dough or cake batter -- creaming together the butter and sugar, adding the egg yolks and vanilla, and then finally alternating the addition of the dry ingredients and sour cream.

The dough will be crumbly at first, and then as you continue to mix it will come together into a sticky dough, but that's fine -- just cover it with plastic wrap and chill it for about 30 minutes in the refrigerator.

Step 4: Cut out the Donuts

Next, it's time to cut out the donuts! You can use an "official" donut cutter, or you can just use two different sized round cutters (such as biscuit cutters). I use a 3-inch biscuit cutter and a 1-inch cutter for the inner hole. This is the cap to my face cream (which works perfectly!), but a shot glass or other similar round cutter will work.

Tip: Dip the cutters in flour in between each donut so that they don't stick to the dough.

Arrange the cut-out donut dough on a parchment-lined baking sheet, cover loosely with plastic wrap, and return the dough to the fridge to chill for about 30 more minutes. Working with cold dough is helpful because it's not as sticky when you're transferring the donuts to the fryer, and because the butter in the cold dough expands when it hits the heat (making the donuts rise better and become puffier)!

Bring a pot of 2-inch-deep oil to a temperature of 340 degrees F. This can take awhile to come to temperature over medium heat, so just be patient.

As you pull the donuts out of the oil, place them on a paper towel-lined tray (to absorb any excess oil) and allow them to cool for about 15 minutes.

Once the donuts have had a chance to cool off, whisk together the milk, powdered sugar, salt and vanilla extract to create the glaze. This glaze is very forgiving -- you can't mess it up! You want it pretty thick so that it adheres to the donuts, so if it looks too thin, just add some more powdered sugar. If it looks too thick, just slowly add a small splash of milk at a time until it reaches the desired consistency.

Dip the donuts in the glaze, and then place them on a wire rack to set for about 20 minutes. The glaze will harden as it sits. I like to place the wire rack on top of the parchment-lined baking sheet that I used earlier to catch drips and make clean-up easy!

Tip -- dunk a fresh donut in a mug of hot coffee for total bliss!

No, deep-fried donuts are not healthy. That said, they're a special treat that should be fully enjoyed -- no guilt allowed! Old-Fashioned Donuts are not dairy-free or vegan (they include butter, sour cream, milk and egg yolks), and they are not low-carb or Keto-friendly. It's very difficult to calculate the exact nutritional profile for each donut made in your home, since it's hard to measure the amount of glaze on each donut or the amount of oil absorbed by each donut in the frying process. As a result, the nutrition information provided in the recipe card below only includes the actual donut dough for one donut and one donut hole (not the glaze or the oil). According to this, an average glazed old-fashioned doughnut contains approximately 420 calories, 21 grams of fat, 10 grams of saturated fat, 57 grams of carbohydrates, 34 grams of sugar and 4 grams of protein.

You can do this, friends! Just assemble the ingredients and equipment in advance and follow the instructions step-by-step. It's a fun project for the kitchen -- and your kids will thank you for the effort!

Enjoy baking? Here are even more breakfast recipes that you might enjoy: 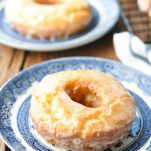 *I do not recommend substituting with all-purpose or other flours, which will yield a more dense doughnut. If you don’t have cake flour at home, you can make your own cake flour for this recipe. To do so, measure 2 ¼ cups of all-purpose flour. Remove 4 ½ tablespoons of the all-purpose flour. Replace the flour with 4 ½ tablespoons of cornstarch. Sift the cornstarch-flour mixture twice. Then weigh and use in the recipe as instructed. Nutrition Information: It's very difficult to calculate the exact nutritional profile for each donut made in your home, since it's hard to measure the amount of glaze on each donut or the amount of oil absorbed by each donut in the frying process. As a result, the nutrition information provided in the recipe card below only includes the actual donut dough for one donut and one donut hole (not the glaze or the oil). According to this, an average glazed old-fashioned doughnut contains approximately 420 calories, 21 grams of fat, 10 grams of saturated fat, 57 grams of carbohydrates, 34 grams of sugar and 4 grams of protein.