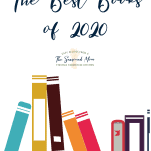 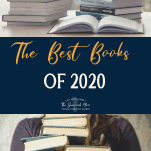 By popular demand, I'm rounding up the best books from 2020! After reading about a book per week, many of you have requested that I compile a list of my favorites from the past year. This will give you quick, easy access to plenty of great reading options to keep you busy in the months ahead. Even better? My fellow bookworm blog readers have submitted their favorite titles from the past year, too! Consider this the ultimate list of everyone's top picks. Happy reading!

Before we get started, I should clarify a couple of things:​​​​​​​

My Favorite Books that I Read in 2020

Since I read well over 50 books this year and didn't do a good job of keeping track of them all, I'm doing my best to compile a list of the favorites that stand out in my mind. I'm sure I've forgotten some! Going forward, my resolution for 2021 will be to keep an ongoing list of every book that I read. That will make this task much easier at the end of next year!

In no particular order, here are the standouts from my personal reading adventures in 2020:

When I asked you to send me the titles of your favorite books from 2020, the results were overwhelming (in a good way). It makes me so happy to know that many of you enjoy reading just as much as I do! I've done my best to compile a list of your recommendations -- especially focusing on those titles that received numerous mentions. There's something here for everyone -- from murder mysteries to historical fiction, memoirs, thrillers and romance. Please feel free to continue this discussion in the comments with any additional suggestions. We can all use new options!

There you go, friends! Thank you so much to all of you who sent me emails and left comments with your personal favorites from the past year. This list ought to keep us all busy in 2021! I hope that you find it helpful. Happy reading!